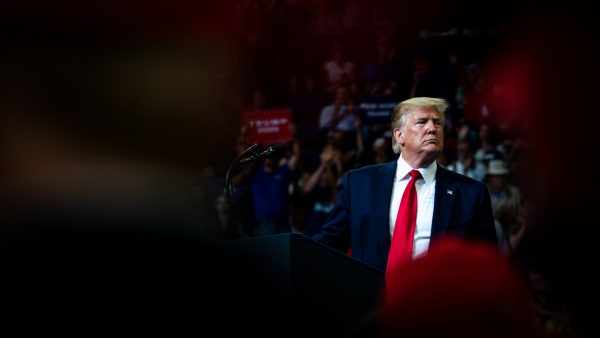 Democrats, fake news media, and Hollywood are desperate to block Trump’s reelection in 2020. Their problem is that Trump has been awesome for America. Our economy is booming. Blacks, Latinos, and women are experiencing unprecedented prosperity as Trump continues to restore power back to We the People. Trump’s swiftly growing list of achievements towards making America great again is extraordinary.

Democrats hope to win the presidency with their usual lies, addicting voters to government dependency, and convincing everyone that they are victims. Therefore, the Democrats’ presidential campaign is built upon falsely branding Trump as a racist white supremacist, promising free everything to everyone without anyone having to work, and criminalizing speaking the truth.

Because Rush Limbaugh and other conservatives spoke the truth that our country is being invaded by illegals, progressives absurdly claim that Limbaugh and conservative media are responsible for the El Paso shooting and must be silenced.

Frustrated over progressive domination of mainstream and social media, patriots have asked, how do we fight back, insuring a Trump victory in 2020?

Brother and sister Americans, we must fight back by using our God-given gifts, talents, ideas, and resources to spread the truth about Trump’s remarkable long list of achievements beneficial to all Americans. We must counter progressive lies. St. Augustine said, “A minority of truth will prevail as long as it is heard.” In other words, despite progressives’ attempts to bully us into silence, we must stand tall and continue spreading the truth. This is how we defeat our anti-American enemies within. Do not think whatever you can do is too small or insignificant. Your little becomes much when you place it in the Master’s (God’s) hand.

I am using my gift as a singer/songwriter to fight back by recording my new Trump Train 2020 song. Singers from across the country will gather September 7th in Silver Spring Maryland to sing in the choir. Interested singers may email me at: [email protected]

Hollywood filmmaker Robert Kirk is a patriot brother who is using his gifts, talents and personal funds to fight back. Though as rare as Bigfoot sightings, Robert really is a conservative writer/director Trump supporter in Hollywood. Robert spent $70,000 out of his own pocket to produce an award-winning hilarious promotional episode of his conservative comedy, “Alien Anthropologists.” Film festival audiences laughed hysterically as Robert poked fun and exposed all the bad players of the deep state’s silent coup against Trump’s presidency. “Alien Anthropologists” is a much-needed salvo in the culture war raging in our country.

Because Robert is not taking a salary for writing, producing, and directing the movie, he only needs $500,000 to make “Alien Anthropologists” a full-length feature film. Still, raising funds has been a struggle. Robert will pursue crowdfunding, but he still needs investors. Where are the conservative billionaires to fund a movie spreading truth in an ocean of Hollywood’s lying propaganda films?

Why do progressives always have so much funding to spread their lies? When Beto O’Rourke challenged Ted Cruz’s senate seat in Texas, my wife Mary and I flew to Texas to be boots on the ground, campaigning several months for Cruz. I was blown away by the disproportionately high number of O’Rourke TV ads compared to Cruz ads. O’Rourke had $38.1 million in his war-chest to spread lies about Cruz. Cruz only had $4.2 million. By the grace of God, Cruz defeated O’Rourke.

Progressives spend mega-millions releasing a plethora of propaganda movies which rewrite history, demonize American heroes, and poke a finger in the eye of traditions and values which have made America great.

Progressives always find funds to trash Christianity and America. Remember when the National Endowment for the Arts awarded an artist with a $15,000 grant to place a crucifix in a jar of urine? The celebrated blasphemous art piece was titled, “Piss Christ.” A portrait of the Virgin Mary painted in elephant dung sold for $4.6 million.

Robert’s promotional episode of “Alien Anthropologists” has won top awards at film festivals including at one of the most respected and longest-running, the 51stAnnual WorldFest Houston International Film Festival, where his film was awarded their top Special Jury Remi Award for original comedy.

Please view the three-minute trailer for “Alien Anthropologists” or the 25-minute promotional episode.

Folks, Robert really needs your support to make his film for us a reality. If you are interested in participating in making this movie, please contact him.

As I stated, it is imperative that each and every one of us do our part to reelect President Trump by spreading the truth about his remarkable presidency. Be creative. Write books, movies, plays, songs and so on. Those with political skills, use them.

Our airwaves are overflowing with darkness; insidiously evil, hate-generating lies about possibly the greatest president in U.S. History. Every time we spread truth, we are lighting a candle in the darkness. Remember, your little becomes much when you place it in the Master’s (God’s) hand.