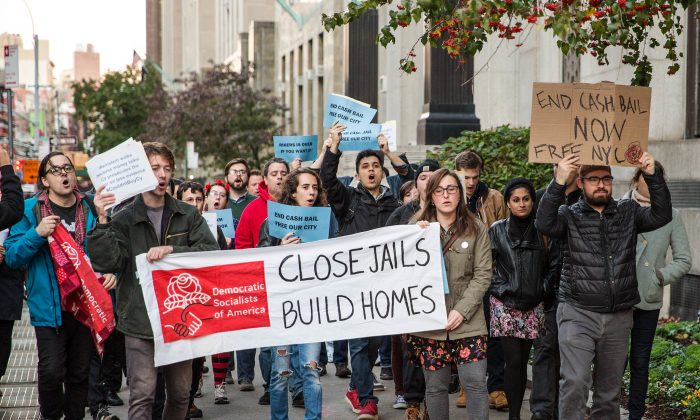 From the Muslim world, the DSA hosted two Americans supporting Middle Eastern revolutionary causes and one representative from the currently unfolding revolution in Sudan.

Speaker Rasha Mubarak represented the U.S. Campaign for Palestinian Rights, an umbrella network of supporters of the Palestinian revolutionary movement. The campaign’s advisory board includes Cornel West of the DSA and Ahmad Abuznaid, a Freedom Road Socialist Organization-linked activist and the son of Palestinian civil servant Nabil Abuznaid. The senior Abuznaid was a “close friend” and adviser to Yasser Arafat, founder of the U.S. State Department-designated terror group Palestine Liberation Organization.

Hanan Yahya, a staffer with the office of Detroit City Council member Raquel Castaneda-Lopez, represented the Yemeni Alliance Committee, which is sympathetic to the Iranian-backed rebel faction in the still-raging Yemeni civil war.

From Sudan came Nuha Zein, a geophysics professor and activist in the Sudanese Professionals Association (SPA), which is a leading element in the current Sudanese revolution. According to a Liberation News interview with Fathi AlFadl, secretary for information and member of the Central Committee of the Sudanese Communist Party (SCP):

“The SCP maintains very close cooperation with the Sudanese Professionals Association. In fact, a number of the SCP work within the SPA. Also, as a party active in the field of trade union movements, the SCP attaches considerable attention to the activities and work of the SPA.”

Bruno Magalhaes, a Sao Paulo-based academic, represented the Brazilian Socialism and Liberty Party, a mainly Trotskyist grouping that broke away from the Workers Party some years ago, essentially because it was too moderate.

Asian guests included a representative of ZENKO (National Assembly for Peace and Democracy) from Japan, which is stridently anti-American and is known to have worked closely with the Iraqi Communist Party in the past.

Lawyer Aaron Pedrosa also fired up the DSA crowd with tales from the Philippines revolutionary movement. Pedrosa is a leader of labor group Sanlakas and the Partido Lakas ng Masa (Party of the Laboring Masses), both of which were founded by former leaders of the Maoist terror group Communist Party of the Philippines/New People’s Army.

The first European delegate to address the DSA convention was Oliver Shroder, head of international politics and a member of the International Commission of Germany’s Die Linke (The Left). Directly descended from the Stalin-era East German Communist Party, Die Linke is now the major socialist party in united Germany.

One of Schroder’s colleagues on the Die Linke International Commission is Gregor Gysi, the last leader of the East German Communist Party and a man repeatedly dogged by allegations that he was an informer for that country’s dreaded secret police, the Stasi.

Fritz passed on “heartfelt greetings of solidarity” from Party of the European Left Chairman Gysi.

She also heaped praise on the assembled DSA comrades, telling them:

“The Left forces of Europe are quite excited about what’s going on here in the USA. … The Democratic Socialists of America are at the forefront of the struggles of a different, of a new America in another radically changed world.”

She also emphasized the importance the European communists placed on the DSA’s work in the United States and vowed that:

“The European Left Party has realized the necessity to work together much closer with the DSA than in the past—much, much closer.”

‘By the Company You Keep’

The DSA portrays itself domestically as a noncommunist political organization that supports a “democratic” form of socialism.

The DSA claims it wants to make the United States more like Norway and Sweden, but on the foreign stage, it works almost exclusively with communist and Trotskyist political allies.

That’s because the “democratic socialist” lie is only for naïve American voters. When the DSA welcomes its real friends into its bosom, they are almost invariably communists and terrorists.