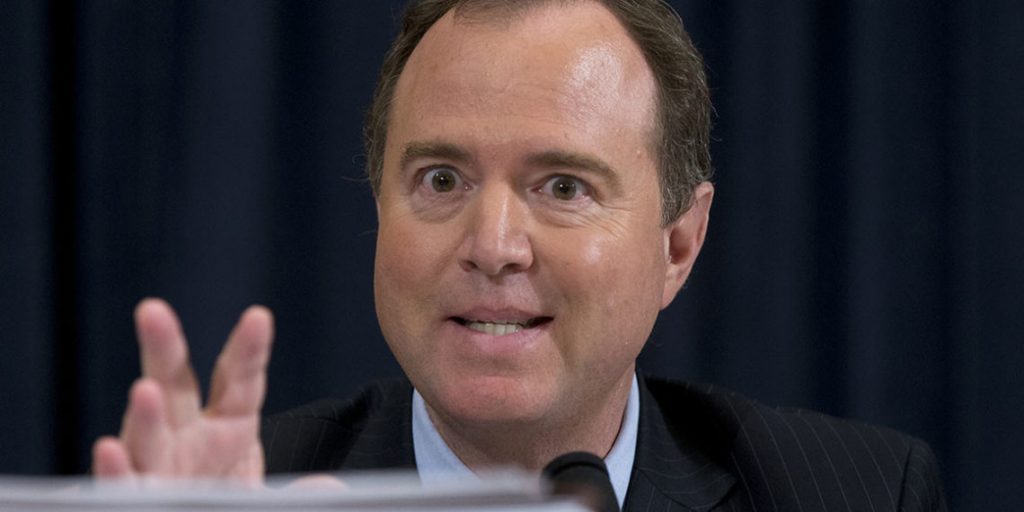 Folks, I don’t know about you, but I am extremely annoyed. I grew up believing in Superman’s America which stood for truth, justice and the American way. But when I see blatantly corrupt politician Adam Schiff in charge of a bogus investigation to impeach our obviously innocent president, something has gone terribly wrong in our country. My heart is heavy for my beloved country and the rule of law.

Allow me to recap for soccer moms and dads who are busy earning a living. Fake news media and Democrats have launched another lie-filled, treasonous silent coup to remove Trump from office.

On TV, Adam Schiff lied to the world, claiming that during a phone call Trump threatened the president of Ukraine. Schiff said that Trump told the Ukraine president that if he did not dig up dirt on Joe Biden, he would hold back funds from Ukraine.

To the horror of Schiff, Democrats and fake news media, Trump made the unprecedented decision to publicly release the transcript of the phone call between himself and the Ukraine president. The transcript proved that everything Schiff reported Trump said was a lie.

In an America in which truth and justice rule, Schiff would be politically tarred and feathered and run out of Washington D.C. on a rail.

Incredibly, Schiff is celebrated by fake news media and Democrats. Ignoring the truth in the transcript, Democrats are still leaving Schiff in charge of their investigation to impeach Trump which is based solely on Schiff’s fabricated version of Trump’s phone call. Not only is this insane, it is infuriating.

This is not our America, folks. We cannot and must not allow Shifty Schiff to arrogantly go unpunished and wreck havoc on Trump’s presidency. At the very least, Schiff must be fired from leading his bogus impeachment investigation.

News coverage of fake news media and Democrats’ insane campaign to impeach Trump is like watching the Emperor’s New Clothes. Knowing that the Emperor was naked, all his subjects pretended to love his new outfit. A confused little boy spoke the truth, yelling, “The Emperor is naked!”

Washington D.C. knows Schiff’s impeachment investigation is based on lies. And yet, fake news media, Democrats, #NeverTrump Republicans and conservatives are behaving as if Schiff has evidence to impeach Trump. Where are the Republicans with the courage to stand up for truth and justice? In essence, yelling, “Schiff is naked!”

Despite Trump’s actual words during the phone call published for the world to see, fake news media and Democrats are behaving as if  the transcript does not exist. Atrociously, they are promoting Schiff’s made-up version of what Trump said, hoping to deceive voters.

Fake news media and the Democrats are attempting to establish a new precedent. I realize fake news media and Democrats have always spun the words of Republicans. But Schiff writing his own version of what Trump said during the phone call and boldly presenting it as the president’s actual words is a whole new level of arrogant, evil deception on the American people.

Be of good cheer, folks. God promises evildoers will get their just rewards. Shifty Schiff and his treasonous homeys will fail again in their never-ending campaign to destroy our president.

Trump will be reelected in 2020. However, we must remain engaged, each of us doing our part to ensure victory in 2020. It can be as simple as sharing with your neighbor a few of the long list of great things Trump has achieved for America. It is crucial that we counter fake news media and Democrats’ lies and non-reporting of Trump’s unprecedented achievements.

Trump has our economy booming. The Labor Department reported that unemployment is 3.5%, a 50-year low. Wages are skyrocketing. Hispanic unemployment continues to plummet to historic lows. Black unemployment is at its lowest ever.

Your fellow patriots joined me, lending their singing voices to enthusiastically sound the rallying cry for our president. The Trump Train 2020 Song website is LIVE! Enjoy the song.  Here is the link to the Facebook page. Please like and share.

So, I jumped into my car to run to the post office. Over the radio, ABC News reported that Trump said the call for impeachment is a sham. The reporter continued saying, “But the allegations are backed up in the record of the phone call.” That is a blatant lie. The transcript exonerates Trump. Do you see the massive coordinated campaign of deception and lies against our president?

The battle for 2020 is on! Let us, “Trust in God and keep your powder dry,” Oliver Cromwell.