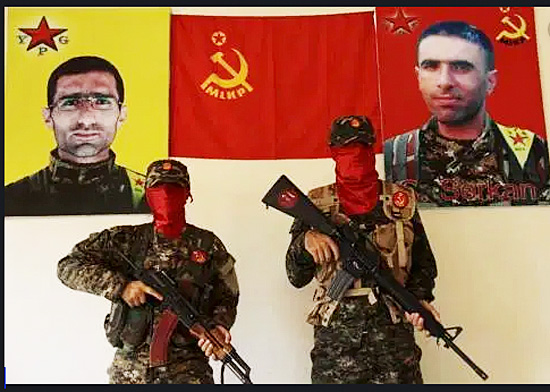 Despite what you may have heard, America’s Kurdish “allies” are not our friends. They are mostly Marxists. The founder of their movement was trained by the KGB. They are not worth one drop of American blood.

In the same away that President Barack Hussein Obama supported Al Qaeda in Libya, leading to the Benghazi massacre, he armed the PKK/YPG Kurdish forces in Syria who are in reality, Marxist terrorists.

In this media age, when the phrase “Trump Betrays the Kurds” is easy to repeat for purposes of impeachment, it’s important to take a moment and look at the facts. Once again, we find Trump is the victim of “fake news” from the Deep State and its media allies.

The PKK, a designated Kurdish Marxist-Leninist terrorist organization also known as the Kurdistan Workers Party, has killed thousands of people in Turkey and has bombed or attacked the country’s tourism industry, hospitals and businesses. Its Syrian affiliate is known as the YPG, for People’s Protection Units.

Dr. Andrew Bostom, an expert on the politics of the Middle East who has analyzed the Kurds as a Marxist-driven movement, tells me,  “I have to say, Trump’s gut-driven ‘vision’ that the Muslim world is a body and soul and wealth-destroying morass for the U.S. and getting the hell out of it, is far wiser than any comparable muddled ‘vision’ from the oxymoronically dubbed ‘think tanks.”

​Indeed, various commentators from the think tanks (on the right and left) and in the media, from Fox News to MSNBC to CNN and even the Christian Broadcasting Network (CBN), are giving us disinformation about our Kurdish “allies” supposedly being “betrayed” in northern Syria.  Our formal alliance in the region is with the Turks, a member of NATO, not the Kurds. Turkey is a member of NATO with an orientation that has historically been anti-Soviet and therefore anti-Russian. Obama’s policies pushed the Turks closer to Russia.

This was because, under Obama, the Marxist Kurds got a new lease on life.

As explained by former Obama official Wa’el Alzayat, “Following the rise of Daesh [ISIS] in 2014, the Obama administration scrambled to confront the terror group without committing US ground troops…In Syria, it settled on the Syrian franchise of Marxist-guerrillas known as the YPG – and from the beginning, the decision was problematic. The YPG shares the same command structure and ideology as their Turkish counterparts, the PKK, who were and remain a designated terror group by Turkey and the United States.”

Alexander Litvinenko, a former Russian intelligence agent poisoned by Russian intelligence, had identified a number of terrorist leaders as actual KGB agents, including Abdullah Ocalan, head of the PKK. His knowledge of Soviet/Russian terror networks is one reason why he was killed.

In the same way, Al Qaeda spawned ISIS, the PKK gave rise to the YPG. Alzayat adds: “In an effort to repackage the group, US Department of Defense officials convinced the YPG to rebrand as the Syrian Democratic Forces (SDF) and to add some Arab elements.”

Alzayat, who served as a policy expert at the U.S. Department of State, has given us a very honest and candid assessment of the disastrous Obama policy that Trump inherited. In effect, the Obama Administration played into Russian hands, leading to the conflict and chaos we see today.

Obama had transformed a Marxist terror group into a “democratic” anti-terrorist movement supported by the Pentagon and the Deep State’s CIA. It was a foreign policy never voted on by the American people and which should have necessitated Obama’s impeachment.

Trump was wise – and fulfilling a campaign promise – when he got U.S. forces out of this quagmire.  But he should not fall into the trap of blaming Turkey for what Obama’s policy has done to the Middle East. Turkey is defending itself.

But in order to weaken Trump’s presidency and prepare him for impeachment, his alleged “betrayal” of the Kurds has been trumpeted far and wide. The charge is a lie based on Deep State and CIA propaganda. What should be done is to expose the traitorous Obama policies that produced the current debacle.

Israeli journalist Caroline Glick notes in her column that “Taking on the defense of Syria’s Kurds would commit the US to an open-ended presence in Syria and justify Turkish antagonism. America’s interests would not be advanced. They would be harmed, particularly in light of the YPG’s selling trait for Obama – its warm ties to Assad and Iran’s Revolutionary Guard Corps.”

One of the few voices of reason in the media, Luke Coffey of the Heritage Foundation, has described the YPG as America’s Marxist and terrorist-linked “partners” in Syria.

It makes no sense to fight Jihadists with Marxists, or vice versa, when they are all opposed to American interests and play into Russian hands.

From the start, as President Trump has suggested, the Kurds have been fighting for their own land and state. They were, of course, willing to take Pentagon and CIA support for their own purposes. They did what was in their interest. In truth, however, they were another Soviet-funded “liberation” movement, part of the “Red Jihad” engineered by Moscow over the course of decades.

It’s sad to see so many “conservatives” and national security “hardliners” buying the left-wing Marxist propaganda about America’s Kurdish “allies.” The development demonstrates that, like the left, many in America’s “conservative” movement are geopolitical ignoramuses with little real understanding of Russian maneuvers in the Middle East.

This helps explain why, until Trump, we had a ‘bipartisan” foreign policy of losing wars and producing thousands of wounded warriors.

It’s time for that bloodshed to end.

*Cliff Kincaid, president of America’s Survival, Inc., www.usasurvival.org  is the author or co-author of 15 books, including Red Jihad,  Permanent Revolution and Back from the Dead: Return of the Evil Empire.