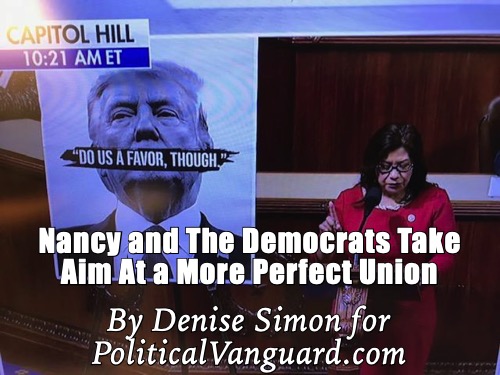 The preamble of the U.S. Constitution references a desire to form a more perfect union, to establish justice and to ensure ‘domestic tranquility’…

Well, as it is plain to see in this Divided Era, we hardly have domestic tranquility at the hands of this misguided impeachment inquiry process, which has officially passed the House led by Speaker Nancy Pelosi and Congressman Adam Schiff.

Pelosi did not hold the gavel during the debate process prior to the vote.  Perhaps she wanted to make it clear that her caucus is driving this foul political judgment at the hands of the Democrats.

As you consider that point, a question is in order.

Are we really to believe that we are going to lose the Republic because of an alleged quid pro quo phone call between President Trump and Volodymyr Zelensky, the President of Ukraine?

Speaker Pelosi did take to the House floor for her debate moment.  She accused President Trump of establishing his own government monarchy and then went on to say the Founders gave us documents that were amendable.  In short, she declared President Trump is usurping his power.

In truth, usurping power by Democrats, not President Trump, was on full display in the House on October 31.  It is the Democrat majority that is overriding the will of the people and the minority Representatives. It is the Democrats that are calling selected witnesses and that have engaged in secret operations utilizing an unprecedented number of designated House committees performing an unprecedented number of inquiries.

It is worth mentioning that forming a more ‘perfect union’ should be an ongoing quest.  It should be pursued and achieved by each oath-taker in government. A divided nation is not a union at all, which speaks to the fact that cooperation and compromise no longer exist in Washington, D.C.

The rules published for the impeachment inquiry and used as a basis for the now passed House resolution, however, prove there is no cooperation let alone compromise. The Republicans are placed in a fully subservient position at the hands of Speaker Pelosi. The Republicans have to ask for permission in the process and Congressman Schiff has the power and authority to deny any and all Republican requests, including calling witnesses and having access to documents and testimony.

The preamble’s stated goal to ‘establish justice’ is also null and void. House Minority Leader Kevin McCarthy called on Pelosi to answer questions centered on the impeachment inquiry process in a letter asking for fairness and transparency to be put on public display. McCarthy asked ten questions in the letter. There was no reply from Pelosi or Schiff other than full speed ahead.

Where does this leave America?

Major unfinished legislative business has fallen on the floor without votes. The People’s business has been dismissed as trivial when matters regarding pay raise for the military, the USMCA gets no vote, when sanctuary cities continue to manifest public safety, when cyber technology is threatened due to ignoring the China threat of 5G and stolen intelligence, when Space is the new battlefield and social media causes more chaos.

Voters are so ill-informed and misguided because twisted media presentations that apathy by American citizens limits their ability to control Washington, D.C.  All of which puts our representative government in full peril.

Finally, the Democrats’ use of a prop on the floor does not turn President Trump’s request of a foreign ally to assist in rooting out decades of corruption in Ukraine into an abuse of power by a sitting President, who by definition of the Office of the Presidency is the top law enforcement agent of the land.

Hey Speaker Pelosi and Democrats: Do America a favor and seek domestic tranquility and take steps to get America out of political peril. Your Oath has meaning and words matter.