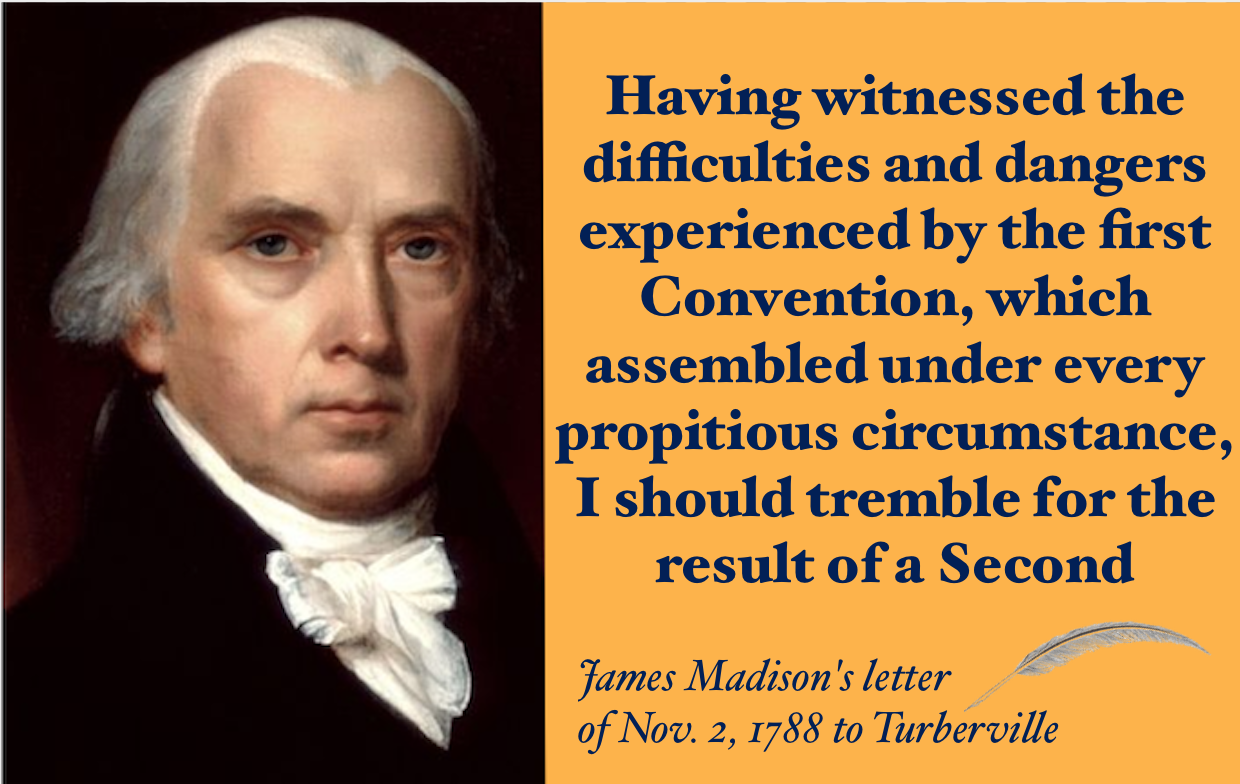 COS Project’s “simulated convention” dog and pony show and what they did there,

Parental Rights Amendment: Selling You and Your Kids Out to Big Government

Wolf PAC’s Amendment for “fair and free elections”, and

Term Limits: A Palliative not a Cure 5

The phrase within Article V, “a Convention for proposing Amendments”, doesn’t restrict the Delegates to the Convention to merely proposing Amendments.  Our Declaration of Independence recognizes that a People have the “self-evident Right” to throw off their government and set up a new government.7  We’ve already invoked that Right twice:  In 1776 we invoked it to throw off the British Monarchy; and in 1787, James Madison invoked it to throw off our first Constitution, the Articles of Confederation (AOC), and set up a new Constitution [the one we now have] which created a new government.

This is what happened:

There were defects in the AOC, so on Feb. 21, 1787, the Continental Congress called a convention to be held in Philadelphia

And in Federalist No. 40 (15th para), James Madison, who was a Delegate to the Federal “amendments” Convention of 1787, invoked that same Right as justification for the Delegates’ ignoring their instructions and writing a new Constitution which created a new government.10

1 That is why James Madison, Alexander Hamilton, four US Supreme Court Justices, and other jurists & scholars warn against it!  See their words HERE.

2 See Michael Farris’s quote HERE. None of our Framers said such a silly thing as Farris claims!  Our Framers actually said the purpose of Amendments is to remedy defects in the Constitution, and they all knew that the real purpose of a convention is to get another constitution.

3 IGNORANCE is our problem.  Americans don’t know what our Constitution says.  Can you recite by heart the enumerated powers granted to Congress over the Country at Large?

4 Mark Levin’s amendment to “grant the States authority to check Congress” [p. 169 of “The Liberty Amendments”] provides that three-fifths of the state legislatures may vote to override a federal statute and certain Executive Branch regulations provided that the States do so within a certain time period.  When that time period has expired, the States are forever prohibited from exercising the override.

Levin’s amendment would strip the States of their long-recognized individual natural right – much written about by our Framers – to NULLIFY all acts of any Branch of the federal government which violate our Constitution. See Nullification: The Original Right of Self-Defense and What Should States Do When the Federal Government Usurps Power?

5 The federal term limits amendment would transfer power from US Senators and Representatives (elected by the People) to the Deep State (a massive body of nameless, faceless, and unelected bureaucrats who would become the PERMANENT AND TOTALLY UNACCOUNTABLE GOVERNING BODY).

6 For the Love of God, your Country and your posterity, READ the Council on Foreign Relations’ Task Force Report on the NAU. This is what the Establishment Elite wants and can get with a convention!

7 The Declaration of Independence is part of the “Organic Law” (the Fundamental Law) of our Land.

8 This Delegate Flyer summarizes the instructions the States gave the Delegates.

9 See ART. 13 of the Articles of Confederation.

10 In Federalist No. 40 (15th para), James Madison says the Delegates knew that reform such as was set forth in the new Constitution was necessary for our peace and prosperity.  They knew that sometimes great and momentous changes in established governments are necessary – and a rigid adherence to the old government takes away the “transcendent and precious right” of a people to “abolish or alter their governments as to them shall seem most likely to effect their safety and happiness,” … “and it is therefore essential that such changes be instituted by some INFORMAL AND UNAUTHORIZED PROPOSITIONS, made by some patriotic and respectable citizen or number of citizens…”