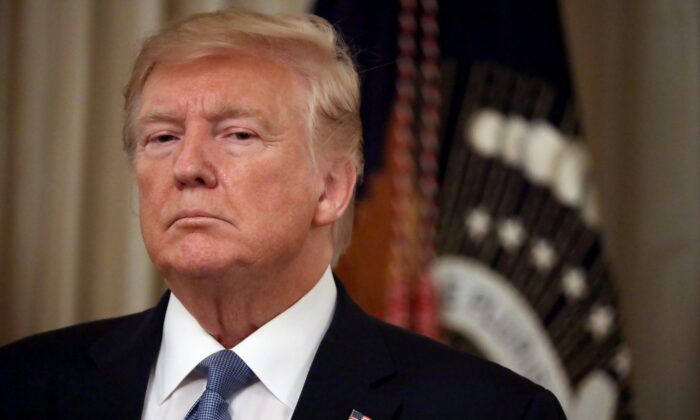 President Donald Trump delivers remarks during the Medal of Honor ceremony for Army Master Sgt. Matthew Williams in the East Room of the White House in Washington on Oct. 30, 2019. (Chip Somodevilla/Getty Images)

Many Congress members simply cannot be trusted to keep the United States’ important national security secrets. Let that sink in.

After U.S. forces killed Abu Bakr al-Baghdadi, the founder of ISIS, during a midnight raid on Oct. 26, House Intelligence Committee Chairman Adam Schiff (D-Calif.) complained that he hadn’t been notified of the operation.

President Donald Trump told reporters in Washington on Oct. 28 that the White House didn’t notify the House Intelligence Committee about the raid due to a concern that the information would be leaked by Schiff.

The Hill reported Trump as saying:

“Well, I guess the only thing is, they were talking about why I didn’t give the information to Adam Schiff and his committee. And the answer is because I think Adam Schiff is the biggest leaker in Washington.”

The president certainly has a valid point. And it doesn’t just apply to Schiff. The House Intelligence Committee shouldn’t be entrusted with the White House grocery list, let alone the details of a highly sensitive military operation that could put many American lives at risk.

There are virtually no serious security protocols in Congress. There are no background checks for Congress members serving on any committees, let alone the especially sensitive armed services, Homeland Security, or Intelligence committees. Is it possible that the United States’ enemies may be aware of this glaring weakness in the United States’ national security network? Is it likely that they might try to exploit it?

Many U.S. Congress members receive money from Iranian-backed entities. Some work closely with Chinese-supported organizations. Many have close ties to Marxist groups such as the Democratic Socialists of America or pro-China groups Communist Party USA and Liberation Road. Many Congress members are sympathetic to the United States’ enemies such as Cuba, China, or Venezuela. Some on both sides of the aisle have ties to front groups for known terrorist organizations such as Hamas.

There are several currently serving members of the House Intelligence Committee with problematic ties. Many of them would probably struggle to get a security clearance to drive a school bus or sell stamps at the post office. But that doesn’t prevent them from serving on a congressional committee with oversight of the FBI, CIA, Drug Enforcement Administration, National Security Agency, and a dozen other national security organizations.

Schiff, for example, has close ties to the Committee of 100 (C100), which essentially runs “influence operations” for the communist Chinese regime. Schiff attended C100 conferences in 2009 and 2016 and has also met with high-ranking Chinese Communist Party officials C.H. Tung, now vice-chair of the Chinese People’s Political Consultative Conference, and former mayor of Shanghai and president of the Chinese Academy of Engineering Xu Kuangdi, all arranged through C100 contacts.

During the 2018 election cycle, Schiff also received funding from the Iranian American Political Action Committee, reportedly a front for the Iranian government.

The second-ranked Democrat on the Intelligence Committee, Jim Himes of Connecticut, traveled to pro-Soviet Nicaragua in the late 1980s to research his undergraduate thesis “The Sandinista Defense Committees and the Transformation of Political Culture in Nicaragua.” Himes essentially whitewashed these civilian spy networks for the Marxist-Leninist regime:

“If the CDSs [Sandinista Defense Committees] maintain and advance their autonomy and continue to serve the role they have served they will help ensure that the people of Nicaragua may have the kind of participatory role in their own destiny they were promised under Sandinismo.”

Himes was elected to Congress in 2008 with help from the Communist Party USA and has worked closely with a Party front, the Connecticut Alliance for Retired Americans, ever since.

The fourth-ranked Intelligence Committee Democrat, André Carson of Indiana, is one of three Muslims currently serving in the House of Representatives.

Carson received money from the Iranian American Political Action Committee during the 2018, 2016, and 2014 election cycles and was an early backer of President Barack Obama’s failed “nuclear deal” with Iran.

Carson has long worked closely with the Council on American Islamic Relations and its founder and current spokesman Nihad Awad.

In 1994, Awad revealed at a forum at Florida’s Barry University that he had once supported the pro-Soviet terror group the Palestine Liberation Organization. When the Soviet Union “collapsed,” Awad switched his allegiance to Hamas.

In February 2017, three Pakistani American brothers, the Awans, who managed office information technology for members of the House Intelligence Committee, including Carson and other lawmakers, were abruptly relieved of their duties. The brothers were suspected of accessing congressional computers without permission. It was later revealed that the three brothers had access to the computers of more than a dozen congressional Democrats, some for more than a decade.

According to the Daily Caller, the father of the brothers allegedly “transferred a USB drive to a Pakistani senator and former head of a Pakistani intelligence agency.”

However, no espionage charges were ever brought.

The House Intelligence Committee, like every other committee in Congress, is shot through with “security risks.”

Is it any wonder that Trump is unwilling to share sensitive information with Schiff and his junior committee members?