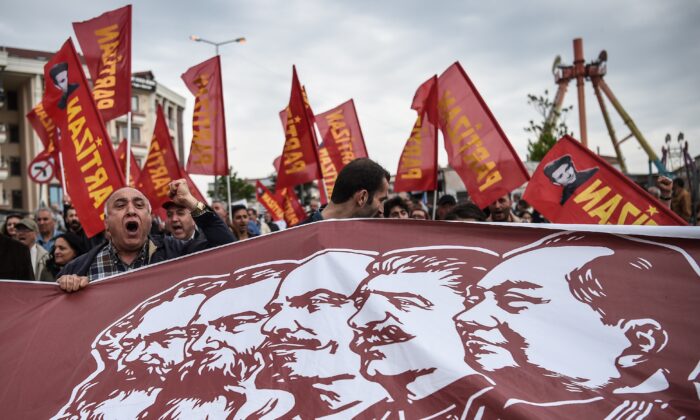 People hold a banner picturing Communist figures including (From L) Karl Marx, Friedrich Engels, Vladimir Ilitch Lenin, Joseph Stalin, and Mao Zedong, as they gather in Bakirkoy district as part of the May Day rally, in Istanbul, on May 1, 2017. / AFP PHOTO / OZAN KOSE

The international communist movement just celebrated its 100th birthday at a gathering in Turkey.

Far from using the occasion to confess their responsibility for 160 million to 200 million deaths and their legacy of torture, famine, and oppression, the assembled communists look forward to a bright future, in which Marxism-Leninism rules every corner of the globe.

The “One-Hundredth Anniversary of the Founding of the Communist International: The Fight for Peace and Socialism Continues” was held in Izmir, Turkey, on Oct. 18–20. The gathering drew at least 56 communist parties from more than 40 countries, including most of the world’s major Marxist-Leninist organizations.

The event was hosted by the Greek and Turkish communist parties, which may be significant because Turkey is increasingly also playing a leadership role in the overlapping world Islamist movement.

The Americas were represented by the communist parties of the United States, Canada, Mexico, El Salvador, Venezuela, Brazil, Paraguay, and Uruguay.

Almost every communist party from Western and Eastern Europe contributed, with the notable exception of the French. Three communist parties from Russia graced the stage, as did the Ukrainian party.

From Asia, the communist parties of Vietnam, Laos, Bangladesh, and Tibet all attended. Azerbaijan was there, as were both of India’s main communist parties. The North Koreans were there, but the Japanese were not. China, though now in practice the leader of the world communist movement, skipped the event—but did get plenty of praise from other attendees.

Almost every party from the Middle East was present, including the Lebanese, Bahrainis, Iraqis, Syrians, the Communist Party of Kurdistan, and the Tudeh Party of Iran.

Africa was represented only by the Algerians—the quasi-ruling South African Communist Party was absent.

Oceania was represented only by Australia.

Judging by conference speeches, posted online, the general mood was confident and defiant. By all accounts, the communist movement is growing and confident of overcoming its opposition, which in many countries is weak or nonexistent.

The representative of the Communist Party of the Russian Federation was both upbeat and combative:

“Speaking of Russia, we can say with confidence that the left movement, led by the Communist Party, is also ‘on the rise.’ Our party was successful during the elections to many local parliaments. This year was one of the most successful election campaigns for our party.

Many in the West believe that because some ruling communist parties, such as in China, Laos, and Vietnam, have adopted some market-based economic policies, they have abandoned Marxism-Leninism. Any real student of Marx will tell you that “market” economics is regarded as a temporary phase to build wealth and military power, and are completely in line with Marxist-Leninist philosophy.

The Vietnamese contribution to the conference affirmed this oft-ignored point:

“On this occasion, the Communist Party of Vietnam would like to express its sincere thanks, deep gratitude to the communist, workers’ parties, progressive forces all around the world for their valuable support, sharing and help in our past struggles for national independence, reunification, as well as in our national construction and defense today.

“We look forward to continuing to receive your feelings, support, encouragement, and solidarity in the new period of the development of our Party and country. We reaffirm our close solidarity with the international communist and workers parties.”

The Venezuelans appealed for international communist solidarity in the face of U.S. pressure:

The Iranian communists made a similar appeal:

“The Tudeh Party of Iran would like to state categorically that the people’s movement in Iran needs the support and solidarity of the international communist and workers’ parties in preventing imperialist interventions in Iran and in defense of the people’s struggle for democracy and social justice.”

“The climate strike demonstrations in October brought more than 1 million people into the streets in Canada – a larger protest than at any time in the last 20 years.  This is significant, and hopeful. Mass protests will continue and must be expanded to include the fight for peace and global nuclear disarmament.”

The Mexican communist party is a major part of the program to destroy the United States by promoting illegal immigration from Latin America:

“We raise our voice for the migrant question, an issue that must be addressed by the communist parties that we have to find a common intervention in that important sector of the international working class.”

Further south, the El Salvadoran comrades boasted of their efforts to coordinate the communist parties of their region:

“We want to communicate that our party, in the framework of flying the flag of proletarian internationalism, is promoting communist articulation with the sister parties in what we call: ‘Meeting of Communist Parties of Central America, Mexico and Panama’, where the Communist Party of Mexico, the Guatemalan Labor Party, the Communist Party of Honduras, the Popular Vanguard of Costa Rica, the People’s Party of Panama and the PCS converge. The VI Meeting was held in San Salvador, in the month of March, on the slopes of the historic hill of Guazapa, the guerrilla cradle of the revolutionary process that the country experienced.

“The Communist Party of El Salvador proclaims the validity of Marxism-Leninism and proletarian internationalism.”

The Lebanese party confirmed that the West is indeed facing a united movement led by China and supposedly non-communist Russia:

“The US-led imperialist system, along with allies in the European Union, Japan, and NATO countries, also faces serious challenges with the rapid rise of other rival international poles with conflicting interests with the dominant imperialist states… This rise, mainly of two international powers, China, led by the Communist Party of China (CPC), and its tremendous economic potential, Russia, which today regains its military and political power as well as regional powers in Asia, Latin America and Africa, is already posing a real challenge to the system of unipolar hegemony that has been dedicated for three decades.”

The Lebanese communists who played a significant role in the 2011 “Arab Spring” also condemned Israel and talked of uniting local Islamic states under the communist banner:

“We in the Lebanese Communist Party promise you that we will devote all that we can devote to achieve this crucial task by formulating our local and regional program based on confronting capitalism, imperialism and the Zionist movement through comprehensive resistance by all available means, and confronting reactionary, authoritarian and sectarian regimes, seeking to assemble leftist forces, Arab communism, to put forward a secular nationalist resistance in the path of socialism.”

The North Korean Workers party made it very clear that any concessions made to the United States or the West would only ever be temporary:

“We will always hold the initiative in the righteous struggle for peace and security of the Korean peninsula to defend our socialist system and the gains of the revolution, and never tolerate or sit idle by the sanctions imposed by the imperialists but fight against and frustrate their moves.”

The Brazilian communists emphasized their battle to overthrow President Jair Bolsonaro and the need for communists to go on the offensive both locally and internationally:

“The PCB [Brazilian Communist Party] understands that the moment calls for mobilization and struggle in the streets, accumulating forces to confront the Bolsonaro government. … In Brazil and throughout the world, it is necessary, more than ever, (for) the resumption of a counter-hegemonic offensive of socialist and communist ideals.”

The enormous Communist Party of India (Marxist) boasted of the huge numbers they were able to mobilize through their domination of the Indian labor movement:

“In India, the CPI(M) is trying its best to move in this direction of intense class struggles by mobilizing workers, peasants, youth, students, marginalized sections and women. On 8-9 January 2019, a 48-hour National Strike of workers called by 10 central trade unions, in which many national confederations of workers and employees also joined hands, was a historic success. The bourgeois media had reported that over 180 million workers participated in this strike. Taking forward these struggles, trade unions have once again called for a general strike on 8th January 2020, for which preparations are afoot.”

“Efforts to beat back the achievements of the worldwide working-class struggle have reached a high point, especially since the election of Donald Trump, a racist, misogynist ‘white supremacist’ as President of my country. Imperialist interventions aimed at regime change and the imposition of the rule of voracious neoliberal capital are underway in many parts of the world. Economic sanctions have been imposed on progressive and socialist governments in Cuba, Venezuela and the Democratic People’s Republic of Korea. …

“But the picture is not all bleak. Neoliberal capitalism offers nothing to the working people and toiling masses of the world. Everywhere there is mounting resistance.

“The Communist Party of China, with its 90 million members, is leading the world’s second-largest economic power on the road to socialism with Chinese characteristics. Socialist Cuba is holding out strongly against everything imperialism is throwing against it and continues to provide solidarity and inspiration to the world. In Argentina, the right-wing Macri government has lost the elections.  Elsewhere, right-wing, pro-imperialist governments are on the defensive; in Guatemala, Honduras, Ecuador, and other countries. In Mexico, a new government is giving promise of advances against old inequities.”

Rodriguez was also fulsome in his praise for a new socialist wave building inside the United States:

“In my country, there is a massive youth-led movement to combat climate change and global warming. Important political figures, such as Senator Bernie Sanders of Vermont and Representative Alexandra Ocasio Cortez of New York have taken a leading role in proposing new environmental protection laws, called “the Green New Deal”. This effort is supported by many unions, environmentalists and other organizations.

“There are many new signs of working-class struggle. Under the slogan of fighting for a national minimum wage of $15USD per hour, super-exploited and mostly minority and women workers nationwide have reached a high level of mobilization. Youth are also mobilized behind demands for an end to gun violence, police brutality, and many other things. Unionized teachers have been carrying out successful strikes aimed at rolling back neo-liberal policies in the educational field.

“The fight for the rights of immigrants with or without documents is nationwide, intense and has the support of labor unions, African Americans, other minorities and many others. The indigenous inhabitants of my country are mobilized against racism and in defense of the national environment.

“Communists in the United States are involved in all these struggles and more, as part of broadly-based coalitions. The working-class fightback was seen in the midterm legislative elections of 2018, and the likelihood that it will sweep the extreme-right regime of Trump and his allies out of power in the 2020 elections is high.”

In a sane world, an international gathering of parties sworn to the destruction of the West would probably make it to the 6 o’clock news. Most viewers would probably like to know that the world revolutionary movement is alive and well and is able to mobilize hundreds of millions of people at will.

They are heavily involved in every major trouble spot in the world. They are actively trying to depose the two most actively anti-communist world leaders: U.S. President Donald Trump and Brazilian President Jair Bolsonaro.

Yet, they gather together to openly plot the destruction of what is left of the free world, with zero mainstream media coverage.

It’s very easy for the world communist movement to be confident of victory when the vast majority of their intended victims don’t even know that the threat still exists.