A few weeks ago word leaked out that one of the most popular Christian businesses in America, Chick-fil-A, had dropped three of their long time charities. To make matters worse, that news was followed by confirmation that the Chick-fil-A Foundation had decided to become more socially inclusive and had begun to support LGBT and anti-Christian groups. The entire list was discovered buried inside the organizations massive IRS form 990-PF list of charitable contributions. Right there on page 11, among hundreds of groups, the name of the arch-enemy of every Conservative was the $2500. donation to the SOUTHERN POVERTY LAW CENTER INC, 400 WASHINGTON AVENUE, MONTGOMERY, AL 36104. 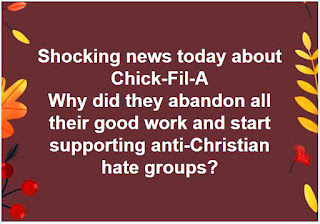 Memo to Chick-fil-A From the BSA

There is a lot to admire about Chick-fil-A, but good, faithful people can make poor decisions. 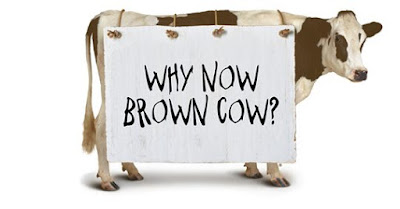 I was a Boy Scouts of America leader for almost 15 years, my two sons are Eagle Scouts, and for the last 10 years, I have served on the Executive Board of a historic Council. It is with that background for context that I issue the following warning to our friends at Chick-fil-A.

I have watched the National BSA’s slow-motion slide from one of the nation’s leading character-building organizations for young men into the cultural abyss that inevitably follows the implementation of policies endeavoring to comport with the current gender devolution orthodoxy.

I was struck this week by a comment from Russell Ballard, a leader of the Mormon Church and member of its Quorum of the Twelve Apostles. Ballard was explaining the upcoming divorce between the Boy Scouts of America (now “The Scouts”) and Scout Units associated with the Mormon Church.

Ballard claimed, “The reality is we didn’t really leave them; they kind of left us. The direction they were going was not consistent with what we feel our youth need to have … to survive in the world that lies ahead for them.”

That statement is grossly inaccurate because, in 2013, it was BSA President Wayne Perry, a Mormon, who led the charge to allow gender-confused youth — those who identify as “gay” — into the ranks of the Boy Scouts. Announcing that policy change in May of that year, Perry insisted that the “resolution reaffirms our core belief in doing one’s ‘duty to God,’” but insisted the BSA “would maintain the current membership policy for all adult leaders,” prohibiting homosexual leaders. But Perry was also quick to note: “Some have voiced concerns that this proposal could put children at risk of being abused. The BSA makes no connection between sexual abuse and homosexuality.”

Ahead of that national BSA board decision, I wrote an open letter to an Eagle Scout, knowing that after so much effort to obtain that rank, this decision would be demoralizing to many Eagle Scouts. I also warned that opening this capitulatory door would lead to demands for homosexual adult leaders.

Indeed, in July 2015, the BSA national board changed its policy to allow homosexual leaders. I responded with a critical analysis of that terrible decision: “The Boy Scouts’ ‘Gay Pride’ Merit Badge.”

In January 2017, the BSA national board capitulated to the next demand, allowing so-called “transgender youth.” For the record, there is no such thing as “transgender.” Regardless of what self-mutilation one undertakes, genetically they will be the same gender from birth to death. But I digress…

It is no small irony that, last year, the BSA announced it was facing the prospect of bankruptcy due to lawsuits in response to homosexual predation on boys — given that BSA leaders had attempted to conceal information about these predators for decades. (They have even mortgaged their crown jewel, Philmont Scout Ranch, reportedly for a line of credit to settle claims.)

In other words, the national BSA board already knew there was a history of adult predators, but still implemented policies that would expose more boys to predation. Despite the fact that virtually all BSA sexual assaults have been homosexual, recall Perry’s mindless assertion: “The BSA makes no connection between sexual abuse and homosexuality.”

As a result of the absurd BSA policy changes, from 2013 to 2018, scouting membership dropped from 2.7 million to 2 million. In January of next year, the BSA will lose an estimated 400,000 LDS Youth members, bringing national membership down to 1.6 million.

So what is the lesson here for Chick-fil-A and its recent policy changes regarding Christian organizations it supports?

First, one reason the BSA capitulated to homosexuals is that the national board is populated with wealthy corporate types — they are fundraisers who also have to be concerned that their association with the BSA might cause a boycott of their corporations. Thus it is a “Faustian Bargain” to invite wealthy corporate types as board members and trustees, thus the board pressure behind these changes.

But Chick-fil-A is a privately held company and its board is controlled by CEO Dan Cathy, son of company founder Truett Cathy, and his family. Thus they do not have the same public corporate motive to abide by leftist social orthodoxies. The primary question for the Cathy family is one of balancing principles with profits.

Second, I have met the Cathys, and many folks with Chick-fil-A, and I know well the extraordinary support they have provided to faith-based groups over the decades. But they have been under assault by homosexual advocacy groups since 2012 when Dan Cathy made clear his opposition to same-sex marriage based on clear Christian principles.

The recent decision to drop some Christian organizations from their support roster after their commitments expired, was arguably based on the company’s store expansion priorities — and not wanting to meet homosexual resistance in those markets. Chick-fil-A President Tim Tassopoulos commented on those priorities as they related to dropping some Christian ministries: “There’s no question we know that, as we go into new markets, we need to be clear about who we are. There are lots of articles and newscasts about Chick-fil-A, and we thought we needed to be clear about our message.”

But the decision to make those changes originated with Rodney D. Bullard, Vice President of Corporate Social Responsibility for Chick-fil-A, which includes Community Affairs and Environmental Sustainability initiatives. Bullard is also executive director of Chick-fil-A Foundation, from where the company’s $10 million in annual charitable donations are awarded.

Bullard is an exceptional person. He grew up in Decatur, Georgia, the son of a minister and educator, in a faithful household with limited means. He struggled to read at an early age but overcame that struggle with the help of a teacher who took a special interest in his situation and tutored him. He says, “If not for Mrs. Adams, I might have lost faith in myself and never realized the power of my ability to learn.”

Bullard is a model of that “power and ability,” coming a long way uphill since he learned to read. From modest beginnings, he earned an appointment to the Air Force Academy. After graduating from USAFA, he achieved loftier goals, including being selected to serve as a White House Fellow under the Bush(43) administration. He earned a law degree from Duke University and worked for the Department of Justice prior to being hired by Chick-fil-A.

There is a lot to admire about Rodney Bullard, the Cathy family, and Chick-fil-A. This is a good company run by good people who do a lot of good things for their employees, customers and the communities they serve. But good people of faith can make poor decisions and, in my estimation, the recent decision to drop Christian organizations that support the timeless traditional definition of marriage and family hints at a trend toward placing profits over principles. Moreover, it may foretell a slide toward simultaneously being “in the world” and “of the world,” rather than in the world, but not of the world. That is a faith and culture bridge that Truett Cathy would never have attempted to cross.

All said, the primary lesson from the BSA for Chick-fil-A is this: Similar to the BSA, Chick-fil-A’s corporate model and customer base have been built on a foundation of strong Christian principles.

Devaluing those principles devalues their customer base. And opening the door to such devaluation has already invited more efforts to silence the principles upon which this good company was founded.

My name is Nelson Abdullah and I am Oldironsides