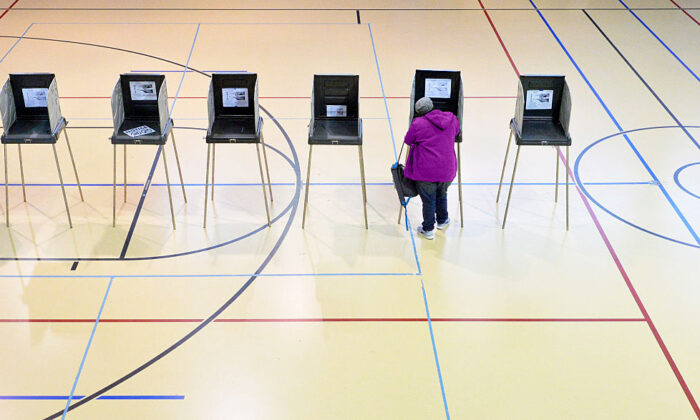 A woman votes on November 8, 2016, in Durham, North Carolina. African Americans turn out to the polls was reporting low across the battleground state. (Photo by Sara D. Davis/Getty Images)

Pro-China communists from the Liberation Road group have insinuated their supporters and allies into several key positions in the city government of Durham, North Carolina.

Liberation Road has been highly influential in flipping neighboring Virginia from a Republican to a Democratic state; North Carolina is the next target.

Liberation Road has a strategy of destroying the Republican Party base in the South—what it terms the “New Confederacy”—by using the minority voting base to flip county by county, state by state to the Democrats.

If the communists can turn North Carolina blue, President Donald Trump will likely lose the 2020 election—handing Democrats and their socialist allies a near-permanent monopoly on power. By establishing a political base in Durham, the comrades aim to project their power and city resources across the entire state.

The 2020 presidential election may well be won or lost in North Carolina.

Since 1985, the Freedom Road Socialist Organization (FRSO) has been the pre-eminent pro-China communist party in the country, absorbing cadre from several other Maoist groups along the way, including the Communist Workers Party, Line of March, and League of Revolutionary Struggle.

In April this year, the FRSO changed its name to Liberation Road—partially at least to sound fewer alarm bells as it proceeds to infiltrate the Democratic Party.

In 1988, FRSO had fewer than six members in North Carolina: a white lawyer from Revolutionary Workers Headquarters and a handful of black comrades from the Amilcar Cabral/Paul Robeson Collective. Through the 1990s, FRSO recruited more old Maoists and a new layer of university students from Durham, Raleigh, and Chapel Hill. They even recruited a couple of former Communist Party USA members, and in recent years seem to have absorbed some cadre from the pro-Iran and North Korea Workers World Party.

In the 2000s, FRSO began sending comrades from California, Massachusetts, and New York to beef up the numbers, soon making the Maoists the most significant force on the left in the region. This was part of a deliberate colonization of Southern states, particularly Virginia, Georgia, Tennessee, and Florida. FRSO targeted the South because of its high concentration of black and Hispanic potential voters, which, coupled with a history of racial polarization, made for great revolutionary potential.

North Carolina, one of the most politically marginal Republican-held states in the South was a prime target. Durham, with the largest concentration of black voters in the state, became ground zero for the Maoists. FRSO supporters began to infiltrate Durham student unions, community groups, labor unions, churches, and local government.

Maoist strategy is all about building a counter-state—taking over whole areas to form a state-within-state to serve as a base to spread revolution across a much wider area. Parts of Virginia are moving in that direction. Jackson, Mississippi, is already there. Durham is well on the way.

In recent years, FRSO has moved away from traditional street activism into more of an electoral focus. The organization now has the numbers and influence to impact elections at both the state and local levels.

FRSO is extremely secretive about membership, but I estimate there are around a hundred cadre in the Triangle area and another 200 supporters or allies. Many FRSO/Liberation Road people lead key organizations that are able to mobilize several thousand people at a time.

To achieve its ends, FRSO has infiltrated several existing organizations and has created others.

Since that time, the DPA has become a major force in local politics. With the ability to raise money and a small army of door knockers and phone-bankers, DPA’s endorsement is widely sought by candidates on the left.

North Carolina Democratic congress members David Price and GK Butterfield and former Sen. Kay Hagan have all been endorsed and helped by DPA’s 2,000 members—as have dozens of lower-level politicians.

Around 2014, FRSO cadre Aiden Graham joined the DPA board; in the same year, DPA helped elect FRSO leader Sendolo Diaminah, a self-described “black queer communist,” to the Durham School Board, though he later resigned before finishing his term.

Longtime FRSO/Liberation Road cadre Bryan Proffit is on the board of the NCAE and was president of the DAE.

With an army of fired-up leftist teachers on their roster, ready to rally or door-knock on command, the DAE has also become a major force in Durham left politics.

Launched in early 2016, Durham For All grew out of a group of FRSO supporters who had been working together for some years on local politics.

In 2014 and 2015, members of the founding team began experimenting with building political power through local elections, and led “victories to elect young, progressive people of color into local offices.”

Durham For All is a completely Liberation Road creation and is the counterpart of similar front groups Richmond For All in Virginia and Memphis For All in Tennessee.

“Corporations and right-wing politicians have rigged the political system, and we’ve had enough. Together, we are building a cross-class, multiracial movement in Durham that is 10,000 people strong. …

“Power comes from thousands of people speaking up and deciding to take action. That’s why our plan is based on building people power from the ground up. The plan has three stages:

“Stage 1: Build a Mandate. 2017. With the launch of our 10K Strong Campaign, we trained leaders like you to ask family, friends, neighbors, and co-workers to sign our 10K Strong Pledge and join the movement for a Durham for All. In less than a year, over 4,500 people said “yes” and signed on! These commitments were the foundation for a new political vision of a Durham rooted in the principles of a Durham for all of us. Grounded in these principles, we organized in working class and people of color communities to find new leaders and get out the vote. Together, we elected a progressive, people of color majority to Durham’s City Council!

“Stage 2: Build a Model. 2018. Through our Decriminalize Durham Campaign, we successfully piloted a base-building model that (1) activated and developed leaders in working class and people of color communities, (2) invited and supported hundreds of people to take new risks in organizing, and (3) translated election victories into policy wins via participatory democracy. We endorsed and elected officials who committed to fighting mass incarceration and stopping deportations ….

“Stage 3: Build a Movement. 2019-2020. In the third stage, we are harnessing the power of our movement to create platforms for co-governance and to pass policy. We are continuing to refine and expand our base-building model to bring new leaders and thousands of voters into the critical state and federal elections in 2020. Working with groups in rural areas, towns, and other cities, we will be part of unleashing millions of engaged residents and leaders in a movement to win back North Carolina from the far right.”

So far, the goal to take over the Durham City Council has gone as planned.

In 2015, the DPA elected Charlie Reece and Jillian Johnson and helped re-elect Steve Schewel to the six-member Durham City Council.

Reece was treasurer of the North Carolina Democratic Party and a past board member and secretary of the DPA.

Johnson was a long-time FRSO affiliate and later served in the leadership of Durham For All alongside comrades Sendolo Diaminah, Aidan Graham, Anna Grant, Tony Macias, and Bennett Carpenter. Steve Schewel was a former radical magazine editor.

In 2017, the DPA successfully backed Schewel for Durham mayor. The DPA also elected their longtime board member and Durham For All supporter DeDreana Freeman and another former DPA board member Vernetta Alston to the City Council.

In 2019, Johnson, Reece, and newcomer Javiera Caballero ran as a leftist “Bull City Together” ticket backed by the DPA.

Schewel, Johnson, Reece, and Caballero were all endorsed as a team by Durham For All.

Liberation Road’s Bryan Proffitt also endorsed the team, as did the DAE PAC, which also supported a “$95 million housing bond to combat gentrification and end the rapid displacement of our communities.”

The left won everything. They passed the housing bond and now hold five of the six City Council seats, plus the mayoralty.

“Tonight we made history in Durham by electing Satana Deberry for DA and Clarence Birkhead for sheriff – both committed to ending mass incarceration and fighting deportations. There are so many things to say about this but tonight I just feel humbled and nourished by the calling to build political power with our people.”

So, stage one of the FRSO Durham For All plan is pretty well accomplished, according to their original aims. Liberation Road and its allied organizations pretty much have a lock on North Carolina’s fourth-largest city and its 275,000 citizens.

Can the Maoists Take the State?

Liberation Road has a strong presence in the state. So do their allies the Democratic Socialists of America, which has branches in Charlotte, Durham, Greensboro, Raleigh, Chapel Hill, Asheville, Winston-Salem, and the Yadkin Valley.

Liberation Road is affiliated to several ACORN-type voter registration organizations in the state, including Down Home NC, Ignite NC, and Blueprint North Carolina.

Between Durham For All, the DPA, DAE, North Carolina AFL-CIO, and the voter registration groups listed above, Liberation Road and its allies have the power to mobilize several thousand election workers against Republican candidates.

If the left is working hard to re-elect Democratic Gov. Roy Cooper and Attorney General Josh Stein, they’re even more determined to defeat Republican Sen. Thom Tillis—considered one the most vulnerable in the country. The Democrats need to flip five State Senate seats for a majority and six seats in the State House.

If the left can defeat Sen. Tillis and flip one or both houses of the state legislature, North Carolina will be well down the road to becoming a Democratic state, just like Virginia was about three years ago.

Pro-China communists from FRSO/Liberation Road stole Virginia from under the nose of the Republican Party. If North Carolina is allowed to go down the same path then Florida, Georgia, Tennessee, and Texas will soon follow suit. The Republican Party will then be finished as a national force.

There is no excuse for the Republican Party to allow that to happen—if they care at all about their own survival that is.

One thought on “How and Why Pro-China Communists Took Over Durham, North Carolina—Huge Implications for 2020”