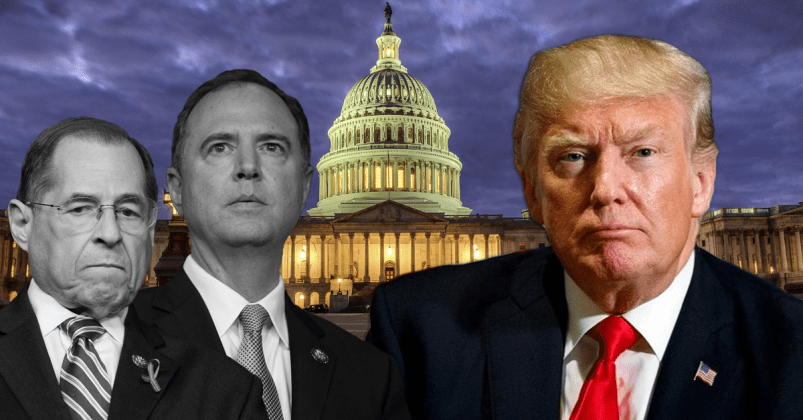 “Here, McConnell is trying to prevent the witness from ever testifying, and the public from ever finding out what they have to say…this will be the first impeachment trial in American history in which the Senate did not allow the House to present its case with witnesses and documents.” – House Democrats Impeachment Managers statement, January 21, 2020

After a Progressive Democrat-led House impeachment process that included secret, behind-closed-door meetings that excluded any Republican; that refused to allow Republicans to call witnesses of their choice; that censored Republican lines of questioning; and that Democrat leadership stated upon its codifying vote was “proof positive” and “airtight”, now Progressive-Democrats say they need an opportunity to “make their case”?

The time for “making the case” was during the phase of the process when the case was required to be made. That phase was the House impeachment phase.

The impeachment process draws from the idea of our legal system but it is a political vehicle that only draws loosely from that model. Just as the House is not mandated to present evidence of a specific compilation of impeachable conduct (i.e. they can be vague, as in the case presented against Trump), the Senate is not mandated to apply specific procedural rules or due-process standards during an impeachment trial (i.e. they do not have to satisfy a call for witnesses given that the evidentiary phase of the process was supposed to be satisfied in the House).

That is the takeaway here: The evidentiary phase of the process was supposed to be satisfied in the House before any vote on impeachment was undertaken.

Aside from the fact that McConnell’s rules for the Senate impeachment trial include the caveat that Senators can vote on additional witnesses and documentary evidence after the House managers deliver their case, we are left with an obvious and obnoxious point.

The Progressive-Democrat impeachment managers floating of the false narrative that additional discovery is necessary is not only an indictment of an inadequate, flawed, and politicized process in the House, it stands as their conviction on the charge that the entire effort was manufactured to affect the 2020 General Election, the very thing they are accusing the President of doing.

Any insistence that witnesses be called is evidence that the House leadership – mainly Schiff, Nadler, and their respective committees, failed to make their case and were unsuccessful in meeting the requirements for impeachment.

Any insistence that additional evidence be submitted is proof the House Democrats failed to meet the burden of demonstrating that High Crimes and Misdemeanors have been committed and that they were, again, were ineffective in meeting the constitutional requirements for impeachment.

In a nutshell: There was and is no there, there.

To that end, any attempts by the House impeachment managers and Speaker Pelosi to apply pressure on the Senate to conduct their trial in any specific way is an unconstitutional encroachment onto the purview of the Senate and grotesque abuse of power. Further, McConnell (of whom I am not a fan) was absolutely correct to include a “kill switch” that allows the President’s defense team to request a motion to judgment or dismissal. To not have included that mechanism would have been to invite a trial by media and not by the Senate.

The totalitarian Islamofascist regime in Iran understands that they must maintain the ability to regulate opinion; to control the news, the narrative so that the illusion of legitimacy is maintained. In that pursuit, they instructed the Iranian Revolutionary Guard Corps to create the Basij. The Basij serve as an auxiliary force engaged in activities that include enforcing state control over society, policing morals, and suppressing dissident gatherings.

The coercive tactics of the Progressive-Democrat Basij – their attempt to bully the Senate into accepting their conditions for and definition of a fair trial, and their furious propagandizing to the American people; their attempt to control the narrative surrounding impeachment – is no less egregious than what the Iranian Basij do to the Iranian people who end up bloodied and dead in the streets of Tehran.

The protestations of Progressive-Democrats; their insistence that they get their way, rules be damned, are the protestations of an arrogant, elitist class of narcissists who have routinely violated due process to achieve their goals and bring about socially engineered changes they deem appropriate for all of our society.

Frank Salvato is a managing partner at TR² Consulting Group, LLC, an organizational and media strategies group. He is the host of The Underground podcast as heard on iHeart Radio, Pandora, Spotify, and anywhere podcasts are heard. His writing has been recognized by the US House International Relations Committee and the Japan Center for Conflict Prevention. His analysis has been published by The American Enterprise Institute, The Washington Times, and Accuracy in Media, and is nationally syndicated. Mr. Salvato appeared on The O’Reilly Factor on FOX News Channel and is the author of six books examining internal and external threats facing our country. He can be heard twice weekly on “The Captain’s America: Third Watch” radio program syndicated nationally on the Salem Broadcasting Network and Genesis Communications affiliate stations.