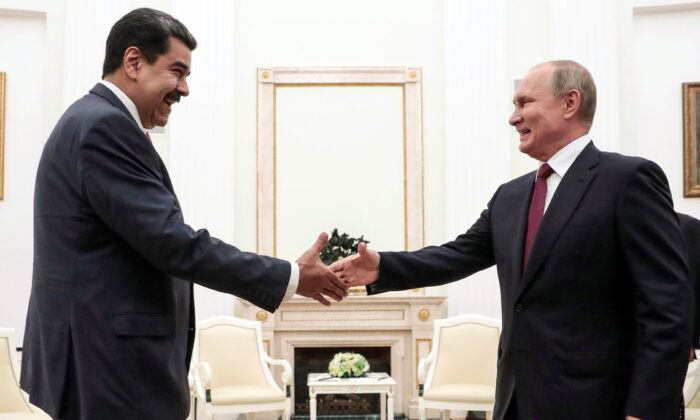 Russian President Vladimir Putin (R) is about to shake hands with Venezuelan President Nicolas Maduro during their meeting at the Kremlin in Moscow on Sept. 25, 2019. (Sergei Chirikov/AFP via Getty Images)

On the final day of the World Anti Imperialist Congress on Jan. 24 in Caracas, Venezuela, American communists watched as President Nicolas Maduro was awarded the Order of Lenin.

The “prestigious” award was bestowed by a group of Russians led by Yaroslav Listov—head of the Central Committee of the Communist Party of the Russian Federation on youth policy.

“We all have Lenin in our hearts. This is a commitment. A revolutionary commitment to build socialism in the 21st century,” said the Russian comrades as they handed the medal to President Maduro, according to U.S. Maoist publication FightBack! News.

The Order of Lenin was established in 1930 as the highest Soviet civilian honor. Most domestic recipients have been Communist Party leaders, heroes of labor, or sporting figures. Past foreign recipients of the medal have included Ramon Mercader, a Spanish Soviet intelligence agent and assassin of Leon Trotsky; Cuban dictator Fidel Castro; Luis Corvalan, the secretary-general of the Communist Party of Chile; Armand Hammer, an American businessman and sponsor of U.S. Sen. Albert Gore, Sr.; Kim Il-sung, the president of North Korea; and the infamous Kim Philby, a British/Soviet double agent.

Maduro’s award of the Order of Lenin at this time, when Venezuela is under huge pressure from the Trump administration, was a show of both international communist solidarity and Russian government support. The Communist Party of the Russian Federation is the number two party in the Russian parliament after the United Russia Party and generally supports President Vladimir Putin’s foreign policy.

“We underestimated the importance of the Cuban and Russian support of the regime, which has proved, I think, to be the two most important pillars of support for the regime and without which it wouldn’t be there, it wouldn’t be in power.”

“With a Syrian professor and member of Ba’ath Party at his side, Maduro began with a story of a visit he had alongside Hugo Chavez to Syria when thousands of Syrians surrounded his vehicle in Damascus and lifted the car in celebration of a brave anti-imperialist leader. Maduro followed this with a declaration of solidarity to the Syrians for surviving an imperialist intervention.

“After a brief comment on the vicious brutality of the capitalist system, Maduro stated: ‘It is here that we are the vanguard of a model of socialism, of anti-imperialism that will transform the world for humanity.’ He followed with a quote in reference to the decline of U.S. Imperialism: ‘Mao Zedong called U.S. Imperialism a paper tiger.’ And that ‘we will build the new world that is coming.’”

Between 800 and 1,500 delegates from over 50 countries attended the event hosted by Maduro’s ruling United Socialist Party of Venezuela (PSUV).

Diosdado Cabello, PSUV’s first vice president, opened the conference highlighting the importance of “solidarity among the countries resisting U.S. hegemony and also among the peoples resisting neoliberalism,” according to the Orinoco Tribune. Cabello criticized the recent U.S. killing of Iranian Gen. Qassem Soleimani, “which was followed by a standing ovation by more than 250 delegates from 51 countries.”

Martin, Sigal, and Byrne have all been active in the anti-Trump protest movement in their respective cities.

This was the fifth FRSO delegation to visit Venezuela since April 2019.

The FRSO delegation talked with several local and national Venezuelan socialist leaders from the PSUV. This included an interview with Gladys Requena, vice president of Venezuela’s National Constituent Assembly and the vice president of the Women’s Commission of the PSUV.

The FRSO delegation visited the Bolivarian University of Venezuela on Jan. 20, speaking to political science classes.

Said Sigal: “Students asked about the movements for change in our country. They definitely had the impression people are protesting Trump, and movements are growing stronger. They are excited that socialist ideas are becoming popular in the U.S.”

The FRSO delegates also visited a free medical clinic at the Bolivarian University of Venezuela where they met some of the many Cuban doctors working in the country, as well as “anti-imperialist delegates from a range of Latin American countries.”

At the end of the Congress, the “working groups of delegates presented their resolutions containing many statements of solidarity and their plans of international collaboration against imperialism,” according to FightBack! News.

International communist activity, backed by Russia, China, and Cuba, is approaching Cold War levels. Much of this activity is now focused on protecting Venezuela, as it was directed at defending communist North Vietnam in the 1960s and 1970s. The fact that American communists are openly supporting the Russian-allied Maduro regime should be of major concern to U.S. authorities.