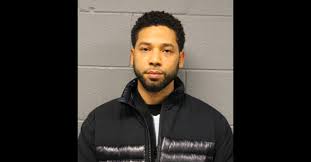 Actress Taraji P. Henson and other cast members of the Empire TV show are lobbying for former cast member Jussie Smollett to be allowed back on the show for the finale.  Taraji said, “We can’t end the show without him.  He’s such an integral part to the show.”

Smollett claimed he was attacked one night by two white guys who yelled, “This is MAGA country!”  Smollett said they poured bleach on him and tried to tie a rope around his neck.  The problem is, it was all a huge lie.  In essence, this evil man attempted to launch a race war.

I only mentioned Smollett’s homosexuality because Democrats, Hollywood, and fake news media exploited it to promote their lie that Trump-supporters hate blacks and homosexuals.

The Chicago mayor and police department were outraged when the state’s attorney dropped all 16 felony charges against Smollett for staging the hoax.  The city of Chicago demands that Smollett pay the $130,000 for the cost of investigating his bogus attack.  Despite documented evidence that Smollett staged a hoax, he is still arrogantly claiming he did nothing wrong.

Seniors, women, and even teens who wear MAGA caps are being assaulted and severely beaten because of deranged Trump-resisters like Smollett spreading lies about Trump and his supporters.

Apparently, Taraji thinks we should get the heck over it because Smollett is good for her TV show.  Smollett attempted to generate racial violence and arrogantly remains unrepentant.  Justice requires that his career be over.

Jussie Smollett should be all over media apologizing to Trump, his supporters, and America.  Bets are that will never happen.