Primer: Remember the United States crafted and offered a peace agreement between Israel, Hamas, the Palestinians just a few weeks ago. Reading below, note that ‘united nations’ is hardly what this blacklist encourages.

The UN High Commissioner for Human Rights published on Wednesday a “database” of companies doing business with Israeli settlements. The list includes 112 firms, 94 of them Israeli and the other 18 from six other countries, including the United States.

The database was generated pursuant to Resolution 31/36, adopted by the UN Human Rights Council (UNHRC) on March 24, 2016, which calls upon the UN High Commissioner for Human Rights to produce a “database of all business enterprises” engaged in certain settlement-related activities in “the Occupied Palestinian Territory, including East Jerusalem.”

The database also referred to as a blacklist, is inconsistent with U.S. law and policy. U.S. law, at 19 U.S.C. 4452(b)(4), states that Congress “opposes politically motivated actions that penalize or otherwise limit commercial relations specifically with Israel, such as boycotts of, divestment from, or sanctions against Israel.”

In addition, compliance with the blacklist could be inconsistent with the U.S. anti-boycott statute (50 U.S.C 4842), which has long been used to punish compliance with boycotts (and blacklists) fostered by the Arab League.

Boycotts spurred by the UNHRC and its blacklist would likely also run afoul of some or all of the two dozen U.S. state laws that require divestment from companies that boycott Israel (in some cases specifically defined to include Israeli settlements).

Compliance with a boycott fostered by the UNHRC and its blacklist may also cause U.S. companies to run afoul of the U.S. Treasury Department’s separate antiboycott regulations. The regulations implement the Ribicoff amendment to the Tax Reform Act of 1976. Internal Revenue Code section 999 requires U.S. taxpayers to report whether they (or corporations they control) have participated in or cooperated with boycotts not sanctioned by the U.S. government. According to the Treasury, U.S. persons who participate in such boycotts “may be subject to penalties that reduce their foreign tax credit, the benefits of foreign sales corporations, and the deferral available to U.S. shareholders of controlled foreign corporations.”

The blacklist also lacks a basis in international law. Indeed, international law does not prohibit business in disputed territories. Nor is doing such business inconsistent with the principles of corporate social responsibility (which are non-binding). That is the official view of the United Nations, expressed in its Global Compact document titled “Guidance on Responsible Business in Conflict-Affected and High-Risk Areas: A Resource for Companies and Investors.”

Finally, the legitimacy of the database is also thrown into doubt by the very makeup of the UNHRC, which includes as members many of the world’s worst human rights violators. Current UNHRC members sitting in judgment of Israel include the Democratic Republic of the Congo, Eritrea, Libya, Pakistan, Sudan, and Venezuela.

There are more than 100 territorial disputes in the world today, including in Crimea, Cyprus, Kashmir, Nagorno-Karabakh, Tibet, and Western Sahara. Yet only the West Bank and East Jerusalem were singled out for such a database. The decision to focus on Israel raises the question of whether the database is really about human rights, or rather about hypocritically bashing Israel.

The list identified companies listed in the United States, France, the Netherlands, Luxembourg, Thailand, and Britain.

Inclusion on the list had no immediate legal implications for the companies. But the issue is highly sensitive as companies named could be targeted for boycotts or divestment aimed at stepping up international pressure on Israel over its West Bank settlements.

Israeli President Reuven Rivlin expressed solidarity with the named businesses, saying, “Boycotting Israeli companies does not advance the cause of peace and does not build confidence between the sides.”

“We call on our friends around the world to speak out against this shameful initiative which reminds of dark periods in our history,” he added.

Israeli Prime Minister Benjamin Netanyahu said, “Whoever boycotts us will be boycotted. The UN Human Rights Council is a biased body that is devoid of influence. Not for nothing have I already ordered the severing of ties with it. It was also not for nothing that the American administration has taken this step together with us. In recent years, we have promoted laws in most US states, which determine that strong action is to be taken against whoever tries to boycott Israel. Therefore, this body is unimportant. Instead of the organization dealing with human rights, it only tries to disparage Israel. We strongly reject this contemptible effort.”

Hillel Neuer — executive director of the Geneva-based UN Watch NGO — tweeted, “The list has no precedent & turns the UN into Ground Zero for the global anti-Israel boycott campaign.” More here. 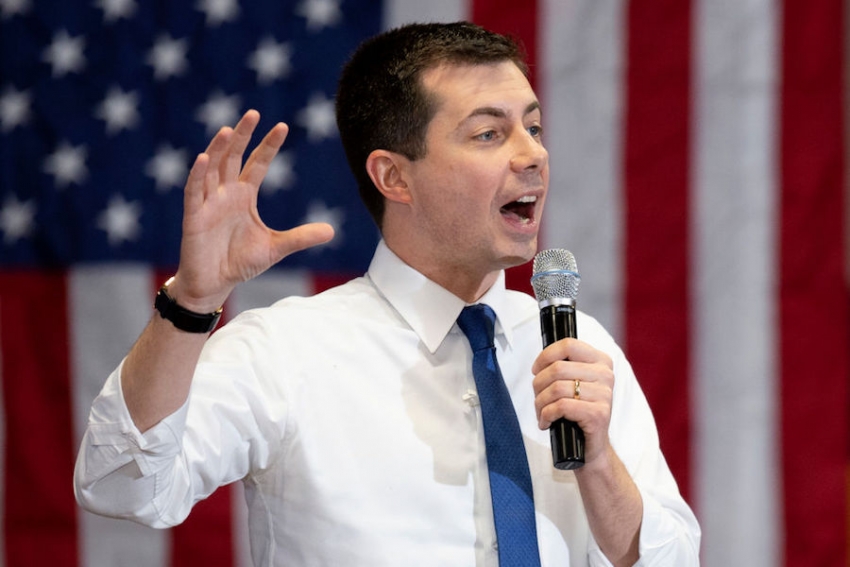 Facing a serious health problem but with millions of Americans praying for him, Rush Limbaugh has demonstrated that he is still in the game, as he declared the other day on his radio show that “America’s still not ready to elect a gay guy kissing his husband on the debate stage president.” He was referring to Pete Buttigieg, the clean-cut Harvard grad who smoked pot in college, turned gay, married another man in church, and leads a small town in Indiana.

Out of nowhere, he has emerged on the national scene as a potential president – the first openly gay president. Buttigieg won in Iowa and came in second in New Hampshire. He has many of Barack Hussein Obama’s donors.

Injecting a note of common sense into this picture, Limbaugh summarized the attitude of many Americans by saying, “…they’re looking at Mayor Pete — a 37-year-old gay guy, mayor of South Bend, loves to kiss his husband on the debate stage — and they’re saying, ‘Okay. How’s this gonna look, a 37-year-old gay guy kissing his husband on stage next to Mr. Man, Donald Trump? What’s gonna happen there?’”

Limbaugh has a knack for saying things that tens of millions of Americans think. This has nothing to do with one’s “sexual orientation.” Most people are tired of the homosexual agenda being forced on America. They don’t want to see two men kissing, on a presidential debate stage and especially not in the Oval Office.

But there is something else that figures into the equation. Buttigieg says the HIV/AIDS epidemic “disproportionately” affects gay men, ignoring the scientific evidence that their dangerous sexual practices dramatically increase the odds of getting sick and dying from AIDS and other diseases.

With this possible health care problem lurking in the background of Buttigieg’s candidacy, President Trump said he would have no problem voting for a gay president. Trump can’t “figure out what to do with me,” Buttigieg says.

Limbaugh is not speechless, however. He understands that Americans are tolerant people who don’t want their children exposed to lifestyles that are dangerous. This fact about homosexuality is reflected in Trump’s own 2021 budget, calling for $716 million for the second year of a multiyear initiative to eliminate HIV in America, a $450 million increase compared to the 2020 enacted level. ​Male homosexuals are at the greatest risk of getting HIV/AIDS because of the way they have sexual relations.

In addition to HIV/AIDS, new data from the Centers for Disease Control (CDC) demonstrates that gay, bisexual, and other men who have sex with men (MSM) are at increased risk for extragenital sexually transmitted diseases such as chlamydia or gonorrhea in the throat or rectum.

By any objective measure, syphilis, HIV, and other sexually transmitted diseases (STDs) make the coronavirus look relatively minor.  The CDC estimates that more than 20 million new STDs occur annually in the United States, contributing to 110 million cases. Our media are careful not to recommend any lifestyle choices that would make getting these diseases less likely. They won’t warn against the dangerous sexual practices outlined in the book The Health Hazards of Homosexuality.

In an article about the dangers of STDs, an epidemiologist for the U.S. Army Public Health Command noted in an article that “Social ‘hook up’ networks and mobile applications allow for easy ways to meet new people, but it’s not always safe and can lead to high-risk activities.” In the case of Buttigieg, who met his “husband” on one of those “mobile applications,” the danger takes on national security concerns. One such dating app, Grindr, is owned by a Communist Chinese firm. The Reuters news agency reported that the Chinese owners “gave some Beijing-based engineers access to personal information of millions of Americans such as private messages and HIV status, according to eight former employees, prompting U.S. officials to ask it to sell the dating app for the gay community.”

Buttigieg says he didn’t meet his “husband” on Grindr but on another app. Asked by a gay magazine, “If it was Grindr, would you tell me?” He replied, “Probably not. But it was Hinge.” This is described as the dating app designed to be deleted. In any case, it looks like secrets were shared. But who had access to them?

It looks like much damage has already been done through the acquisition of sensitive files on self-proclaimed gay, bi, trans, and queer people through Grindr – and perhaps other apps. It was Obama’s CIA Director John Brennan who conceived a “CIA Diversity and Inclusion Strategy” to hire “Lesbian, Gay, Bisexual, and Transgender Individuals.” Buttigieg says he was a Naval Intelligence Officer who served in Afghanistan. But some of his military service documents are said to be “redacted.”

Questions about Mayor Pete’s personal lifestyle — and demands for the complete release of his military and medical records — are in order. Limbaugh has only touched the surface of a blockbuster issue for Mayor Pete. He is a presumed security risk who must prove that his sensitive personal data has not already fallen into the hands of the Chinese communists or Russian intelligence services.