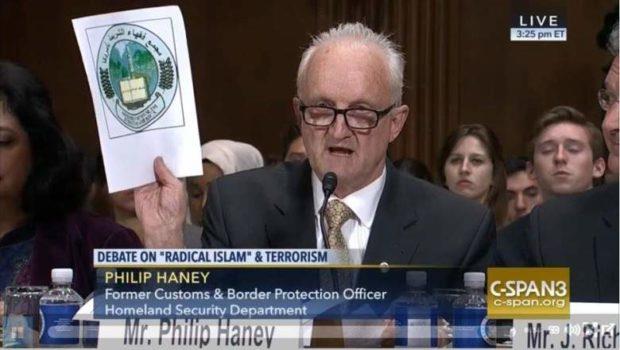 Friday night I received the shocking and sad news that Philip Haney had died. It was on a private email list and I did not see it until the next morning after a call from my friend Denise Simon who let me know of the tragedy. I proceeded to call my source, who I could not reach and then I went about looking into the event. I still have far more questions than answers here and I am not convinced as of yet that there was no foul play here.

I was not close with Phil Haney. I knew of him and greatly respected him, his research and his work. In our circles, he was known as the Happy Warrior. It was well known that Haney was a devout Christian, ethical, and definitely someone you wanted fighting by your side in the trenches. Haney was an Arabic culture and language expert and an outspoken critic of the Obama administration, particularly over its handling of Islamic extremism. He was also staunchly anti-communist. It’s a small world out there in this fight and his death has rocked all of us.

As most out there know, Haney was a former Homeland Security official who became a whistleblower in the Obama administration. He knew where all the dirty secrets were buried. When he left DHS, he kept copies of everything. Good thing as his work was purged by the Obama administration and then Jeh Johnson claimed he did not even know who Haney was, which was a blatant lie. Haney was also the author of “See Something Do Nothing.” He supposedly has another book being released in a month or so but there are reports now that may not occur.

He was an outspoken critic of the Obama administration, specifically its handling of radical Jihadist elements and Islamic terrorism.

Haney, who retired in 2015, studied Arabic culture and language while working as a scientist in the Middle East before becoming a founding member of the Department of Homeland Security in 2002 as a Customs & Border Protection (CBP) agriculture officer.

After serving as an armed CBP officer, he was promoted to its Advanced Targeting Team. He specialized in Islamic theology and the strategy and tactics of the global Islamic movement.

In other words, Haney was a dangerous man because he knew what was going on and he was not politically correct. Haney testified before the Senate Judiciary Committee in June 2016 that the Obama DHS ordered him to delete hundreds of files on individuals believed to be involved in Islamic extremism. He also said publicly that the government possessed enough information to prevent domestic Islamic terror attacks, including the San Bernardino attack in Dec. 2015.

In 2018, Haney stated that he had been working on a “special assignment” in Minnesota to stop Rep. Keith Ellison from being elected Minnesota’s Attorney General. Friends of Haney’s are saying that he was planning on doubling down on efforts to “protect America from progressive leftists socialists.”

The following is a list of unanswered questions I have. This does not make me a conspiracy theorist… I am concerned that there are major outpoints in the report of Phil’s death.

1. Phil went missing last Wednesday. His body was found Friday morning. Why is that? Why was he missing two days before committing suicide?

2. Haney was found outside of his car at the lonely intersection of highways 124 and 16. I hear he was not far from his home. He was on the ground with a handgun next to his body. Was this caught on camera?

3. Was the gun registered to Haney?

4. Why did the coroner issue a terse one-paragraph determination that proclaimed the death a suicide by a self-inflicted gunshot wound but the police still say this is an on-going investigation? If it was suicide as the coroner says, wouldn’t it be open and shut? Frankly, my gut reaction when I heard that Phil had died this way was a) he was murdered and b) they would try and call it a suicide. Here’s a link explaining the roles of police officers and coroners over events like this (hat tip: Denise Simon). 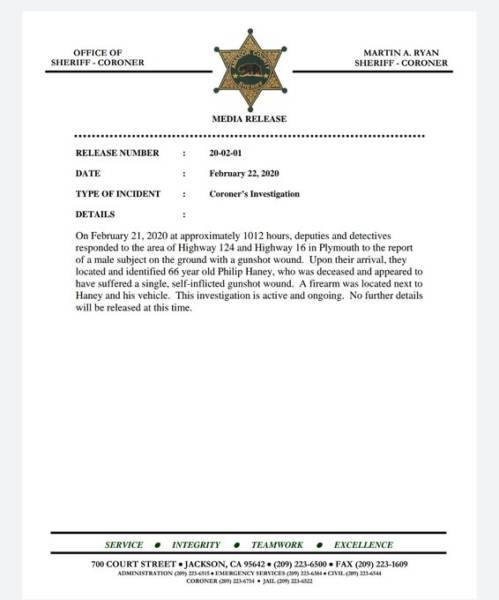 5. They say he was shot in the chest. That’s an awkward way to off yourself. Most men who kill themselves with a gun go for under the chin, through the mouth or via the temple to ensure the job is done right. Holding a gun that way would be unsteady and might not end it for you. No note has been reportedly found, nor are there social media posts indicating any preconceived notions of depression, let alone suicide. His last Facebook post was a meme ridiculing the impeachment snafu. I also wonder why that intersection was chosen when he could have killed himself at home or out in the middle of nowhere.

6. What about gun residue? And fingerprints? DNA anyone? Ballistics?

7. Haney’s friends claim he was never happier and there is no way he would kill himself and yet here we are. What does his fiance have to say? Haney’s wife died last year of a prolonged fight with cancer. He was recently engaged and about to get married. Was there a breakup or some argument there? He was also set to go on a trip to Israel within two days of his trip. He was also getting ready to go back on the road ahead of the upcoming presidential election.

Phil Haney was a friend & patriot. He was a target because of all he knew of Islamic terrorist coverups. He insured his life by archiving data that incriminated the highest levels of the Obama administration. Phil Haney didn’t kill himself. RIP, Phil. https://t.co/pvy7MflFwc

8. Where was his daughter? Haney was said to be spending time with her and thankfully she was not anywhere near this at the time of his passing.

9. Was Haney having financial problems? He sold a great book but had mounting bills from his late wife’s illness. As stated before, he has another book coming out but some say it was rejected by the publisher. It is also said he was attempting to rejoin DHS but that is unlikely given that he was 67 and was terminated from the bureau. He was living in a trailer in Plymouth, CA.

10. Why did it take the media well over 24 hours to report on Haney’s death? He’s a high-profile figure and I would have thought that the Sacramento Bee and others would have been all over it immediately. Gateway Pundit broke the story from supposedly the same source that I heard it from as well as social media belonging to family and friends of Haney. Blogs and then the media all echoed the same story that was vague on facts and very short on sources.

11. Haney was scheduled to have heart surgery next month I think. Why would he kill himself before that surgery? Was there another diagnosis? Were there health insurance issues?

12. Why was it originally reported by Sara Carter that he died in southern California when he died in northern California? I respect Sara a great deal and would like to know if she has other information. She also alluded to Haney being murdered.

Somebody I deeply respected and considered a friend Phil Haney – a DHS whistleblower during the Obama Admin was apparently killed yesterday in Southern California. Pray for his family and pray they find the person who murdered him. Still trying to get confirmation on details

An etymologist and self-proclaimed nerd, Phil was relentless in his pursuit of the cockroaches who were infesting our country and attacking our way of life. Among the enemies this quirky bug hunter pursued were Osama Bin Laden, the Muslim Brotherhood, Hamas, the Holy Land Foundation and their offspring – the Council on American Islamic Relations (CAIR), the Islamic Society of North America (ISNA), the North American Islamic Trust (NAIT) as well as the subversive operatives in the Obama administration… many of whom are still working for the Department of Homeland Security.

Antithetically, renowned counter-jihadist Robert Spencer mourned Phil’s passing by saying that “Phil Haney was a man of singular courage and inspiring patriotism in a time of pandemic cowardice and the ascendancy of America-hatred on the Left. He will be as missed as much as he should be emulated.”

And the unintimidatable Pamela Geller shared that “Phil Haney was a patriot and a hero. His courage in the face of overwhelming adversity was rare. He was without peer. Haney stood up to the Obama administration and shook the DHS to its very foundation. Our country has lost a great American. I mourn this kind and gentle man. My thoughts and prayers go out to his loved ones. It is a great loss.”

For me, and others who knew him, Phil had been the warning bell of an honest whistleblower. This little-known figure was a titan in the counter jihad effort. Truly, a hidden national treasure.

And we will miss this happy warrior.

People that I know spoke to Haney as recently as last Wednesday and there seem to be some things going on in counterterrorism and intel circles that don’t make sense here. I would really like some answers to these questions and I would like to see the truth come out and be explained because this makes no sense to me. Haney sure didn’t look to me like someone who would kill himself.

My friend JD Rucker put this whole thing into perspective and echoes my own thoughts exactly:

Philip Haney said his enemies may try to make it seem like he committed suicide. Shortly after that, he allegedly committed suicide. Who commits suicide at the side of the road by shooting themselves in the chest? None of this makes sense.

He’s right… this whole thing reeks if you ask me.