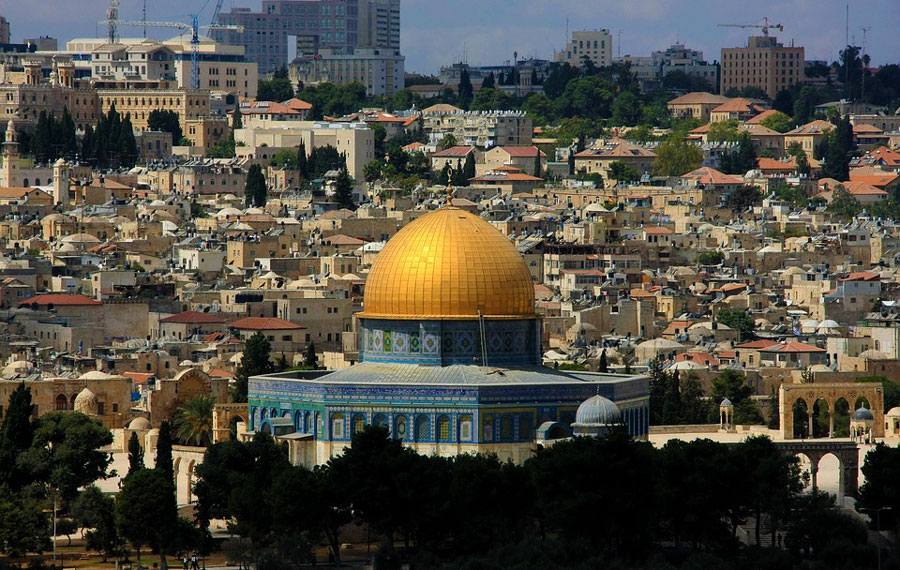 (INTRODUCTION)  In order to continue the Islamic war against Israel and the Jews, no libel, no matter how mythical, may be abandoned.  No matter the passage of 14 centuries, his followers are mindlessly bound to suffer Mohammed’s dream of world conquest.

Fernando Alcoforado’s dissertation, “Radicalism Palestinian not justify genocide in Gaza,” was published on Academia.com despite its numerous inaccuracies.  I am not surprised.  Whether devoid of ethics or in support of a political agenda, their published material can be fallacious and unreliable.

The writer’s title alone revisits the Palestinians’ false accusations of genocide by Israelis.  Substantial documentation produced by Doctors Without Borders has shown that massacres, as in Jenin, were staged with corpses exhumed from nearby cemeteries.   We know that UNRWA’s schools teach hate and violence against Jews and Israel, Palestinian women and children are used as human shields at rocket-launching sites, and children are used to ignite and float explosive balloons and for constructing terror tunnels  – dangerous and deadly activities.  This is not genocide, but child abuse and human sacrifice, where leadership and families weaponize their children for an interminable war.  And when the children are martyred, their parents are paid handsomely by Hamas/PA.

Alcoforado shrewdly inserted that Gaza has existed since Antiquity, insinuating that the Palestinians did likewise. Although the landmass has certainly existed since Ancient times, there was never a Palestinian state, people, government, monetary system, or culture until 1967.  After Egypt, Syria, Iraq, Jordan, and Lebanon attacked Israel and lost the war, those caught in the crossfire and trapped in Gaza were barred from returning to their native homelands.  They fabricated this attachment to the land, but the indigenous people of Israel are the Jews, also known as Hebrews and Israelites.

Our academic bemoans the Gazans’ suffering from a dearth of industry and a chronic water shortage.  We agree, but the reason lies firmly with the Palestinian Authority (PA) and can be characterized in one word, Dependence.   The PA receives, arguably, the highest level of aid in all the world, $540 million for 5 million people including succeeding generations, compared with, say, $113 million for Burundi’s 10 million people, or $304 million for Cameroon’s 23 million people.   Funds meant for providing enough electricity and infrastructure to run Gaza’s sewage system, water purification, construction, agriculture, healthcare delivery, and essential medical supplies, are filtered through the fingers of the corrupt PA.  An unemployed population serves as the endless, expendable live ammunition in its war against Israel, but also as PA’s milch cow, so that their leadership may continue to live in grandeur.

The Jews were never tempted with dependence on others.  Notwithstanding overwhelming obstacles, Israel’s pioneers battled malaria to drain the swamps of Galilee, which then exposed the toxic peat beneath, resulting in the death of wildlife.  It took tenacity and commitment to nature and science for the Israelis to make the desert blossom again, and blossom it did.  The Arabs chose another course.

Despite its being 60% desert with a tenfold population increase since its founding, Israel has become a superpower in water management and conservation.  Their technology is now used 150+ countries, and they export $2.2 billion annually in water-related technology and water-intensive produce.  Because Israeli citizens are educated on conserving water, use desalinated seawater for drip irrigation, and treat and recycle nearly all sewage for crops, they are able to provide large amounts of water from their own supplies to Palestinians and the Kingdom of Jordan.

Surely, this could also be done in Gaza, but Palestinian leadership refuses to invest any of the massive aid to develop its own water infrastructure or repair its antiquated system, leading to enormous waste.  When Hamas’s rocket attacks on Israel damage Gaza’s pipes, Israel’s water authority makes the repairs. Israel supplies less water to Israeli communities in the disputed territories than is stipulated in the Oslo Accords and transfers the remaining quota to the Palestinians – who merely balk and bask in their victimhood, using the drought as an accusation to discredit Israel to the UN.

When Gaza was under Hamas rule, only 10 percent of the West Bank had modern plumbing in June 1967, but today 96 percent of West Bank Palestinians have clean, safe water piped to their homes in Israel.  Contrarily, Gaza’s water crisis continues because Hamas uses the international funding for its war against Israel.  If Israel were to withdraw from the West Bank as Alcoforado suggests, it would leave Israel in far more peril.  After 1400 years of violence and bloodshed, it would be insanity to believe that Muslims would live in peace based on this researcher’s recommendations.

Our scholar rues the overcrowded conditions in Gaza, one of the most populous places on the map, blaming Israelis, when their countries of origin – Egypt, Jordan, Iraq, Lebanon, Syria – should have accepted their return instead of leaving them hostage.  Their cultures keep them imbued with resentment and hate, without incentive for making improvements.   Is this inevitable in overcrowded societies?

Consider Brooklyn, New York, the most populous borough, the second-most populous county in the US, and a thriving hub of entrepreneurship and high technology start-up firms – a sign of happy lives with no children primed for suicide missions.  The differences are largely a matter of choice and culture.  Israel has held the honors of 5th through 11th happiest nation over the years; none of the tyrannical 57 Islamic member states even remotely qualifies for the list. Alcoforado joins the PA’s futile efforts to delegitimize Israel while the biased UN continues to fund $1.3 billion and train Palestinians to pursue legal advocacy against the one UN member, Israel.

Whether deceived or brazenly deceitful, Alcoforado states that Palestine, “a British protectorate [until 1948], began to have a growing Jewish population.”  He flouts the 3,000 years of continuous Jewish presence in Israel, one of the few ancient peoples to survive into modern times, and Judaism being among the world’s oldest living religions.  He omits the history of the Jews who bought neglected, uncultivated swampland or sand dunes from absentee Arab landowners in the mid-1800s to create agricultural colonies,  undeterred by backbreaking work and illnesses – as reported to the League of Nations in 1921.

The critic conveniently reports half-truths, asserting that the establishment of a free Jewish state resulted in growing populations of Jews only, failing to mention the Christians, Muslims, and other groups that flourished simultaneously.  Israelis developed thriving farms and urban life, industry, power plants, social institutions, universities and the Palestine Orchestra that became the Israeli Philharmonic. They restored their ancient language, Hebrew, and rich culture.  They restored their national independence and welcomed and absorbed the successive waves of returning immigrants and refugees (many fleeing Arab countries).  Arabs in Israel appreciated the development and higher standard of living until Haj Amin al-Husseini began fomenting riots (1929),  committing massacres and rapes, beheadings, torture, and mutilation.  It is fair and honest to say that Arabs live better in Israel than in any Islamic country and, when offered the choice of Israeli or Palestinian citizenship, they invariable choose the former.

Alcoforado vaguely observes, “There were clashes between Arabs and Jews,” but the attackers were Arabs.   Likewise, he added, “Both Israelis and Palestinians claimed this share of the land-based on history, religion, and culture,” but Jewish history, religion, and culture go back more than 3,000 years, whereas the Palestinians appeared in 1967, and their tenuous Islamic attachment goes back no further than the 7th century of Mohammed.  Even the Koran attests that the land was given to the Jews forever (5:21).

“You will find very clearly,” says Sheik Dr. Muhammad Al-Husseini, “that the traditional commenters from the eighth and ninth century onwards have uniformly interpreted the Koran to say explicitly that Eretz Yisrael has been given by God to the Jewish people as a perpetual covenant.  There is no Islamic counterclaim to the land anywhere in the traditional corpus of commentary.”   The term, “Palestinian” was an insulting term conferred by the Romans on a Roman Empire outpost to which the Judean Jews were exiled.

Today’s Palestinians have no culture inimitable to them before 1967.  Their governance was the Ottomans.  Their monetary system, established by the 1994 Paris Protocol, is tied to the rates of Jordan, the US, and Israel.  There are no discoveries of ancient artifacts to verify any but the Hebrews’ existence.  Their religion is Islam, their common language Arabic with some French.  Their own music emerged after 1948.  Their “traditional dress,” not traceable beyond 1922, may be attributed to the Arab or Bedouin.

Continually troubled by the “mass migration of Jews from various countries to Palestine,” Alcoforado excludes the context of their return to their Biblical native land and that many had been first fleeced before their expulsion from surrounding Arab countries.

On the other hand, Arab migration is a fulfillment of hegira, “departure,” the migration or journey that fulfills Mohammed’s example of “civilizational jihad.”  Mohammed migrated with intent to establish a new base of operations from which to conquer and rule; today’s jihadis do so with the intent of populating and dominating new lands.  Where they cannot advance with weaponry, they can colonize and transform the society, by stealth or violence, to change the demographics, legal systems, and governments of their objective – global submission to sharia and the reestablishment of a caliphate to rule accordingly.  Fifty-seven Islamic states have succumbed; Israel, Europe, and the United States are obviously on the Islamic agenda. President Obama assured us of such a fundamental transformation.

If Alcoforado sincerely believes there can be peace with Palestinians, he is gravely underinformed and ill-informed.  If he speaks on behalf of the Palestinians, as his surname suggests, he has written pure deception, taqiyyah, and it should not be peddled as academic.