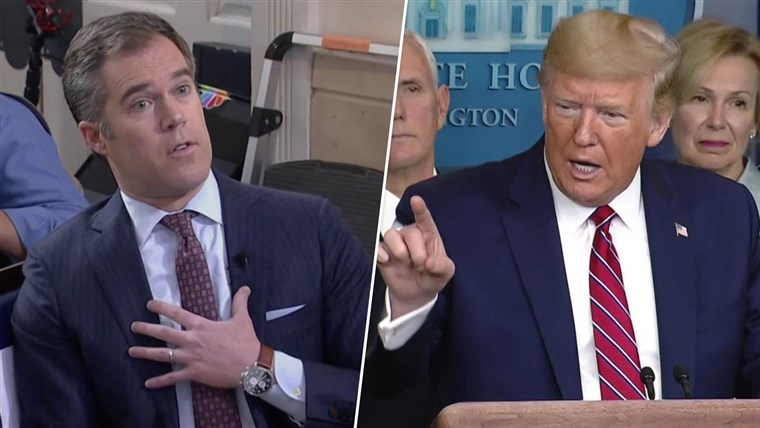 During a press conference in which our problem-solver extraordinaire president sought to calm and reassure Americans suffering media-induced corona-madness, a fake news media minion could not resist exploiting the national crisis to attack Trump, bombarding him with absurd “gotcha” questions.

Rather than behaving like a typical Republican, fearfully scrambling for an answer, Trump’s response was, “I think you’re a terrible reporter.” This is why we love Donald J. Trump.

The “terrible reporter” was a surrogate for fake news media, Democrat presidential candidate Joe Biden, and the Democratic party, who are selfishly attempting to use corona-madness to stop Trump’s reelection. They say screw the economy and emotional-well-being of the American people.

Trump is advised to abandon his instinct of immediately pushing back against media lies and bias. What part of fake news media demonizing everything out of Trump’s mouth do advisors not understand? Trump is damned-if-he-does and damned-if-he-doesn’t.

I believe Trump’s God-given gift is his instincts which have produced a remarkably swift long list of winning achievements for America.  Trump ain’t broke. There is no need to fix him. After three and a half years of enduring unprecedented illegal dark forces launched against him, Trump remains laser-focused on making and keeping America great. Amazing!

Political professionals always advise Republicans to “take the high ground.” Do not push back too hard against Democrats’ horrible policies and lies. Be extremely careful not to use words media can spin against you. Meanwhile, fake news media gives Democrats free reign to flood the airwaves with outrageous lies such as “Republicans want you to die.”  Democrats claim Republicans want to starve children and “see blacks hanging on a tree.”

Republicans’ passivity and fear provides cover for Democrats to negatively brand Republicans and infect every area of American life and culture with anti-Christian and anti-American progressive poison.

Trump is the first Republican president to courageously take a stand, boldly proclaiming that they will not get away with that crap on his watch.

Folks, there is a blessing in the Democrat and fake news medias’ all-consuming hatred for Trump. For decades, they have hidden their anti-American and anti-Christian agendas behind a mask of faux compassion for minorities, women, and the poor. Deranged hatred has caused them to rip off their mask, exposing them as the cruel, cold and calculating traitors they truly are.

By Trump calling out media lies and Democrats’ stupid failed policies, Americans are finally realizing how harmful Democrats are to America. Could this explain why 25% of attendees at Trump rallies are Democrats?

Here are a few Democrat assaults Americans are suffering because Republicans did not push back:

Rev. Jesse Duplantis said mainstream media is using the coronavirus to force Americans into worshiping their false god of fear. Rachel Maddow called for Trump to be banned from the airwaves for not embracing fake news media’s be-afraid, be-very-afraid corona-madness narrative.

My wife Mary and I shopped for groceries. In Walmart and other stores, shelves were strikingly empty. I realize this is anecdotal, but I could not help noticing a calmness in the air, shoppers were extra polite. Have we progressed beyond the initial panic which caused shoppers to fight over toilet paper? Are president Trump’s swift actions, informative press conferences and strong calm leadership working?

“Blessed are you when others (fake news media) revile you and persecute you and utter all kinds of evil against you falsely on my account.” Matthew 5-11

I am grateful that Trump continues to trust his God-given instincts. Roll on Mr. President. We the People are with you.

2 thoughts on “Trump vs the Terrible Reporter”