New York Governor Andrew Cuomo, a Catholic who accepts and promotes abortion, says the death toll in his state from the coronavirus pandemic has surpassed “the same evil that we saw on 9/11.” It is also the same evil as abortion. “Make Unborn Babies Great Again” was one of the signs at the March for Life but Cuomo doesn’t seem to care about those victims. In fact, he signed into law a bill allowing babies born alive as a result of a botched abortion to die without medical help. “No public official in America is more pro-abortion than New York Governor Andrew Cuomo,” says Bill Donohue of the Catholic League for Religious and Civil Rights.

Before coronavirus, evil was already all around us. And it will remain with us.

As we celebrate Easter with empty pews and confront the “invisible enemy,” in the form of a virus, there are reportedly six exorcisms being conducted in the Catholic Archdiocese of Washington at the current time. The pagans and secular humanists scoff at such reports. But signs of demonic possession can be measured. They include a colossal amount of strength that is not natural, the ability to speak in languages the possessed don’t know, sometimes in the form of ancient languages the possessed couldn’t possibly learn, and knowledge of unconfessed sins by the possessed person who reveals them to those participating in the exorcism.

An exorcism in Mount Rainier, Maryland, in the Washington, D.C. area,  inspired the book by William Peter Blatty and the film, “The Exorcist.” Blatty also wrote Legion, a book about demons based on Satan’s  proclamation, “My name is Legion, for we are many,” in answer to Jesus’ question, “What is your name?”

Despite Cuomo’s own blindness to the sin of abortion, a modern form of paganistic child sacrifice, the “same evil that we saw on 9/11” is an interesting choice of words that is made more relevant because of the fact that the FBI has still failed to resolve the question of who carried out the post-9/11 anthrax attacks on America. They killed five Americans, poisoned others, and resulted in billions of dollars of economic damage.

For those unfamiliar with FBI incompetence in the anthrax case, consider using some of your stay-at-home time during the economic lockdown to watch the Clint Eastwood movie, “Richard Jewell,” about how the FBI (and the media) framed an innocent man in the 1996 Olympic Park bombing case. The same FBI pattern of deception was employed in the post-9/11 anthrax letters case. The FBI had a “profile” that led them in the wrong direction.

The anthrax letters, which were mailed to American media organizations and two senators, featured the phrases “Death to America,” “Death to Israel,” and “Allah is God.” These were indications that an Islamic extremist had written them. At least one of the 9/11 hijackers had a lesion, possibly from anthrax exposure.

But the FBI dismissed these obvious leads as a diversion intended to falsely blame radical Islam and focus attention away from the real perpetrator, supposedly a right-winger with a military background.

Playing down the threat of jihadist bioterrorism is something that U.S. intelligence agencies, led by the FBI, did in the case of the anthrax attacks. The FBI director at the time was Robert Mueller, who later became the Russia-gate special prosecutor pursuing Trump. In 2010, the FBI officially tried to close the case by blaming the anthrax attacks on a dead man, U.S. Army scientist Bruce Ivins.

Mueller was the “errand boy for the New World Order,” in the words of author and former Louisiana state Senator John Milkovich. From 9/11 to organized crime figure Whitey Bulger to the crooked bank BCCI, the Milkovich book examines a series of FBI cover-ups and scandals. Unfortunately, FBI Director Christopher Wray has not cleaned out the rot.

The FBI’s mishandling of the anthrax case is relevant because of the need to investigate the source of the coronavirus, Communist China, and whether the fingerprints of the regime are on the release of the deadly disease. On January 28, as the coronavirus virus was spreading to the United States and Europe, the Department of Justice announced that Dr. Charles Lieber, the Chair of Harvard University’s Chemistry and Chemical Biology Department, and two Chinese nationals had been charged in connection with aiding Communist China.

Our media, led by the New York Times, have insisted that it is unacceptable conspiracy thinking to label the virus as a bioweapon from China. This was the same paper that, in the aftermath of the anthrax attacks, fingered an innocent man, Dr. Steven Hatfill, as the culprit.

Fortunately, there are specialized publications, such as Defense One, that have looked at the evidence of China’s role in controversial biological work. It ran an article last August that carried the ominous headline, “Weaponizing Biotech: How China’s Military Is Preparing for a ‘New Domain of Warfare.’” Among other revelations is that China published a book, War for Biological Dominance, emphasizing the impact of biology on future warfare. This makes official U.S. “Medical Deep State” involvement with China and its Wuhan Institute of Virology a matter of utmost concern.

As Americans, if only from the viewpoint of national survival, we have an obligation to put a name and a face to evil in the world today. It’s not an exercise in futility because, on the occasion of Easter, Christians are faced with the reality of evil in the world and the victory of Christ over it. Many Catholic priests on Saturday are saying the exorcism prayer, also known as the original Prayer to Saint Michael written by Pope Leo XIII. Of course, they need to remove the evil in their midst that has taken the form of sexual predators.

Cuomo referred to the “silent killer,” the virus, adding, “There was no explosion but it was a silent explosion that just ripples through society with this same randomness, the same evil that we saw on 9/11.” But the evil can be traced, in the case of 9/11, to Islamic terrorists, and in the case of the coronavirus, to Communist China.

Islamic terrorism and communism are two of the major threats to America and the world today. They are in fact evil.

President Trump said on Friday that he would have an announcement next week on possible funding cuts to the China-front World Health Organization. This is a good step forward. But we also need a special commission, with independence from the FBI, to investigate the actual Chinese role in the release of the coronavirus. At the same time, let’s reopen the anthrax case. Remember that, in 2002, then-Rep. Mike Pence wrote a letter asking why international links weren’t being probed in the anthrax mailings.

To refuse to admit, in advance, that evil stems from terrorist regimes and terrorist groups is not professional journalism. It is moral blindness, exercised in the name of political correctness. These reporters are refusing to identify the sources of evil in the world. Perhaps they need to get back to church. 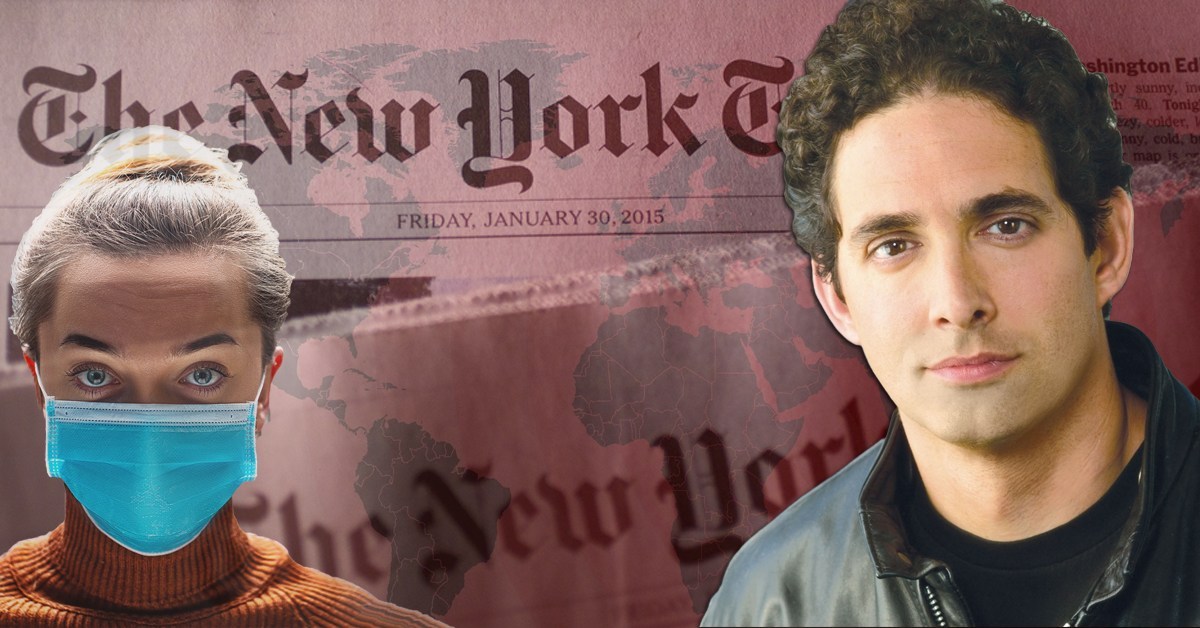 “I went to Yale and I worked for the New York Times, the people on the left hold themselves out as being science-driven, as being smarter, they think they’re smarter but they won’t look at facts that won’t meet their narratives… everyone needs to hear this counterargument, whether or not it’s right, you need to hear it because the damage we are doing to ourselves right now is so enormous.” – Alex Berenson, former New York Times reporter who covered the pharmaceutical industry

When you decide what truth is based on feelings, emotions, or social media consensus rather than examining the facts – all of the facts and without ideological bent or bias – you graduate to becoming useless to the truth.

The kneejerk reaction to everything the President has said to date on this the subject of COVID-19 has been based on political hatred and positioning. I can say that with high confidence because there are too many, as Donald Rumsfeld would say, “known unknowns and unknown unknowns” related to the issue. So, no one can speak with ultimate authority.

That said because this is an unusual event, some of the usual measures cannot stand as sacrosanct. The topic of the hydroxychloroquine cocktail and employing it to combat the COVID-19 virus is one of those instances where the traditional “government-speed” process and measure must be altered.

So far the argument against the cocktail (hydroxychloroquine, azithromycin, and zinc) has been that it hasn’t been subjected to the usual drug trials where COVID-19 is concerned. Yet, in the need for expedience not only should we look at cursory results (all positive) we must honestly look at the negatives or side effects, which many scientists and physicians when queried, have said are rare.

One thing is clear, however. Of all of the Lupus patients who are taking hydroxychloroquine, not one has developed COVID-19. In the need for expeditious examination, that needs to be an indicator.

Away from the medical sphere, we need to step into the economic sphere to address the incredible damage our collective kneejerk reaction has inflicted on our economy. And here is where I completely agree with Berenson. The absolute overreaction to this event – and the pig-headed mindset that one size fits all, where prevention and mitigation are concerned – defied the need to employ sound measures titrated to regional needs.

Should we all employ hyper-vigilant hygiene and appropriate distancing? Yes. That wouldn’t be a bad practice to maintain. But shutting down the national economy when it could have functioned to support the affected areas was, in a word, “unbrilliant.”

It’s time to use the models as malleable guides, not dictates as they have proven – when one examines them – grossly inaccurate. Let’s try what has appeared to work and get back to work, before the loudest mouths of the political class start insisting that Socialism is the only way out of this.

Because you know that’s coming.