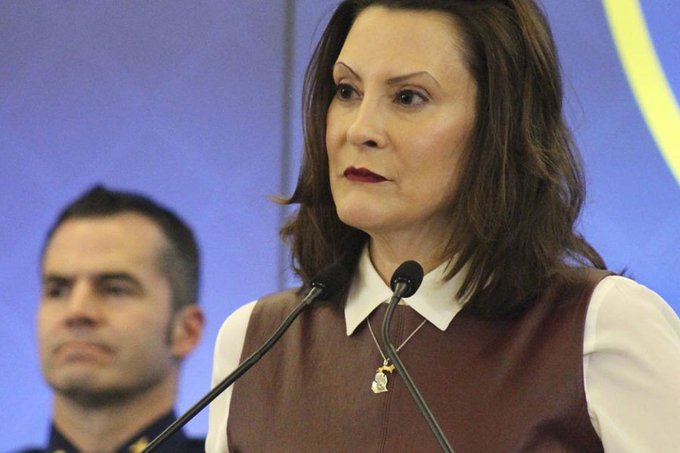 Gov. Gretchen Whitmer, photo thanks to John Gabriel, whose article, “MI Governor Loses ‘Consent of the Governed’” is recommended, for further reading. And for extra credit, a reply to Gabriel’s tweet on the subject cites a peculiar analog to the governor’s brown attire.

Many of them collaborate, mapping out plans to fulfill perverse goals and objectives in closed-door, or especially now, in VPN meetings definitively conspiratorial. And others are attempting to be their own special kinds of reprobate.

As the Daily Caller relates, apparently, Governor Gretchen Whitmer of Michigan (Democrat of course) thinks that somehow, a “family” distinctly belongs to a “woman” (she avoids the term, mother). But beyond that, she also maintains that a mother’s killing of her baby, so tenderly and dependently consigned to the soft, nurturing walls of her very own womb, is a “life-sustaining” act.

Yeah. Whitmer teaches us just how abortion must be a government-approved “essential service,” in our times of social distancing.

“‘A woman’s healthcare, her whole future, her ability to decide if and when she starts a family is not an election, it is fundamental to her life,’ Whitmer said. ‘It is life-sustaining and it’s something that the government should not be getting in the middle of.'”

Add that to the famous maxims of George Orwell’s 1984, “War is peace. Freedom is slavery. Ignorance is strength.” And hey, murdering your child is life-sustaining, girl.

As you may know, this is not the only dictum lately coming up from Hell, out of left-field, and through the mouth, or pen of this pol which has many Michiganders very concerned. But I wanted you to know about this one gem of defilement. Just imagine we could smell such utterances, or see the whispering demons. How many pregnant mothers are now inspired? How many abortionists sustained in these times hard pressing?

May God have special plans for my erstwhile state of Michigan.

So you have it, the aforementioned article’s tweet and reply:

Today (April 16) President Trump and the “experts” outlined their plan to reopen the economy. Fundamental to this is seeing two weeks of a sustained decline in COVID-19 cases. So, which graph are they going to use? The graph of cases by report date like this one (the typical one you see, in this instance, for the nearer suburbs of Chicago) — where you don’t see a two-week decline?

Or, the epi curve, i.e., the graph which shows the date of onset of symptoms, which is what actually shows the progress of the outbreak (and the one that’s really hard to find for most states and localities)? It looks like this one, which shows a sustained decrease for an entire month:

Both show the same underlying data, but the first one is basically useless because:

Presumably, the testing result delays will be coming down more and more, with the backlog going away and the new, fast tests used, but we still need to base decisions about reopening the country based on the epi curve. But that doesn’t look scary enough — we need graphs with big, scary-looking, red blobs!

Here’s the latest from Chicago but it’s by reporting date. They don’t show you the epi curve anywhere that I can find:

It looks just like the same graph from suburban Cook County and so there’s every reason to believe that the epi curve would look just as good if they would show it to us!

This thing is already basically over. It’s time to reopen Illinois! The rest of the country needs to use the right data, too.

Richard J. Wright, a chemist and information technology specialist, has been tracking the official Covid-19 (Corona-SARS) data and assessing our government’s disease progression modeling, plus responses, at virtualwright.com. 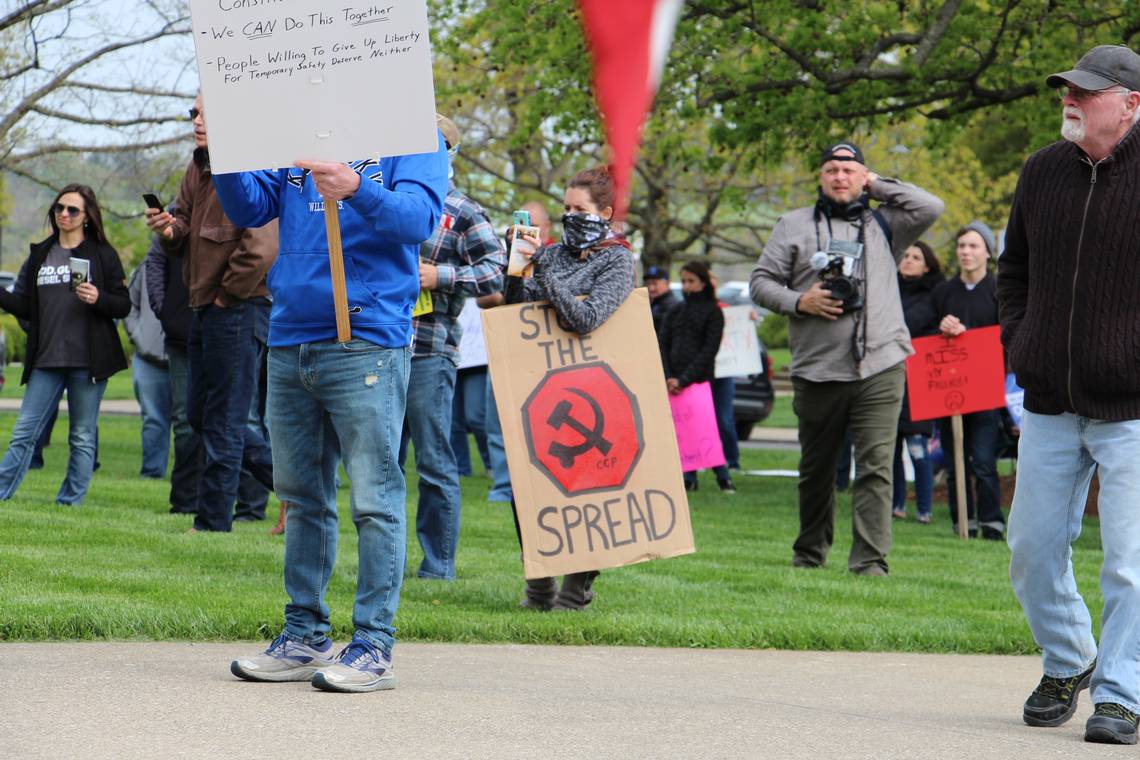 In contrast to phony George Soros-financed “protests” for “progressive” policies, real grassroots movements have been emerging in America targeting tyrannical governors and demanding the return of our God-given rights of freedom of assembly and speech. What is happening is reminiscent of the Tea Party protests that emerged under President Barack Hussein Obama and made his socialized medicine policies into a teaching moment for the nation about the threat of socialism.

Here we are years later and the socialist threat has been made into a frightening reality by liberal governors who claim to be protecting our health and welfare by shutting down free enterprise and suppressing basic rights. They seem to think they can use this crisis to buttress the government sector while making themselves look good and leaving the private sector in ruins.

The latest state to feel the heat from citizens is Maryland, where a liberal Republican Governor, Larry Hogan, has ordered the wearing of masks in stores.  Hogan’s executive order defines what is and what is not acceptable to wear.

“Reopen Maryland” is a group of Maryland citizens who contend that “far less disruptive means of managing the disease can be employed” than the draconian measures now being used. They have scheduled a protest for noon Saturday in Annapolis, Maryland. Responses to the group include:

In neighboring Virginia, groups such as ReOpen Virginia, End The Lockdown VA and Virginians Against Excessive Quarantine, have emerged to fight for freedom. One protester held a sign, “My body. My choice to work.” In Raleigh, North Carolina, a similar movement emerged, but protests were labeled by authorities a “nonessential activity.” One citizen responded, “You cannot place the First Amendment on a list of banned items. That’s not how it works, guys!”

The “Magasota” movement in Minnesota is another such uprising and has been turned into demands for the state’s liberal governor to open up the economy so that people don’t have to stand in line at food banks or starve to death. On Friday, a “Liberate Minnesota” protest is being held to protest Governor Tim Walz’s executive orders locking down the state. “Minnesota citizens now is the time to demand Governor Walz and our state legislators end this lock down! Thousands of lives are being destroyed right now. Small businesses are shuttering by the thousands across our state, and families and retirees are watching their life’s work be destroyed in front of their eyes,” the organizers of the protest said.

On Wednesday, “Operation Gridlock” was held in Michigan, to protest Governor Gretchen Whitmer’s arbitrary shelter-in-place rulings and edicts.  The governor issued an order declaring that “all individuals currently living within the State of Michigan are ordered to stay at home or at their place of residence.”

Nevertheless, citizens got in their cars and trucks and drove to Lansing to circle the Michigan Capitol Building. Drone photography captured the magnificent scene, as thousands showed up. Organizers said, “Our radical Governor needs to treat us like adults (a/k/a taxpayers who fund her JOB) who are aware that we need to take steps to stay healthy.  Apparently, she missed that being healthy INCLUDES having a JOB, opening your business SOON and keeping our Constitutional rights.”

A photograph showed a demonstrator with a “Heil Whitmer” sign. Others carried signs saying “Stop the Tyranny” and “End the Lockdown.”

Tucker Carlson illustrated the danger of the socialist buffoonery on his Fox News program by interviewing New Jersey Governor Phil Murphy, who said he didn’t think about the Bill of Rights before arresting people going to church, synagogues, or state parks. This totalitarian mindset seems to come naturally from these power-hungry politicians, who never have to suffer themselves.

Americans understand the danger of a spreading virus but also the danger of government-run amuck. They want to protect the vulnerable, including the sick but also healthy people losing their jobs. They want the politicians to devote some time to thinking their way out of a lockdown that threatens to downgrade the status of the United States into a banana republic without bananas.

On the national level, President Trump is thinking of these Americans, while navigating his way through the interference of busybody health “experts” with high government salaries and permanent jobs. Taking the lead, Trump’s guidelines for “Opening Up America Again” are a way to prod irresponsible governors into thinking of their citizens as free people and not just pawns on a chessboard to be manipulated into accepting government handouts or poverty. Trump has the power under emergency statutes to force the country to be opened on a national basis, but he has decided to let governors have the opportunity to move forward first.

The protests we are seeing develop across the country are evidence that grassroots Americans will be there to make this happen. They don’t want to see America turned into China as a result of the China virus.

Our media, which are deemed “essential” businesses, mock these ordinary Americans while continuing to pull down paid handsome salaries and ordering food to go.

In another major development, local sheriffs are joining the resistance to tyranny. In a release from Michigan, they stated, “As Sheriffs of Michigan’s 101st House District, comprised of Leelanau, Benzie, Manistee, and Mason Counties, we write today to inform the public of our respective counties of our opposition to some of Governor Whitmer’s executive orders. While we understand her desire to protect the public, we question some restrictions that she has imposed as overstepping her executive authority. She has created a vague framework of emergency laws that only confuse Michigan citizens.”

They added, “As a result, we will not have strict enforcement of these orders. We will deal with every case as an individual situation and apply common sense in assessing the apparent violation.”

As they understand, common sense is in short supply among the tyrannical governors who don’t even have to set foot inside the “essential” liquor stores and pot shops to get drunk with power.