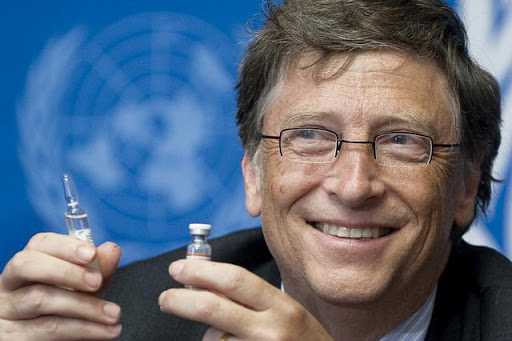 Billionaire Bill Gates, the co-founder of Microsoft Corp., is called entrepreneur, normal guy, and Potential Savior of the World.  Gates’s raison d’etre, however, is his father’s globalism, to have one world under one master because most humans are superfluous “reckless breeders,” the concept behind Planned Parenthood, supported by Melinda Gates.  He believes in Lebensunwertes Lebens, life unworthy of life, the term I chose judiciously because of the Gateses’ eugenicist ideology of population control.  The family legacy is domination and control of the world’s systems, including technology, medicine, and agriculture.  The foundation has provided unbidden contraception to 120 million women across the globe, which is social engineering and authoritarian eugenicist thinking.  The basic premise is that it is easier to eliminate the poor and suffering than it is to eliminate the sources of poverty and suffering.  Click here for more on the notorious Gates family.

Much has been written about Common Core, the nationalization of American schools forced by the Obama administration, the United Nations, Bill Gates, and others for globalized education, which caused our academic disintegration.  The children’s reading skills were intentionally reduced, their math proficiency scores worst internationally, their creativity discouraged, and overall achievement degenerated.   They’ve been robbed of their pride in country, their individuality supplanted by a tribal mentality, the very young exposed to myriad sexual activities.  The essence of their femininity and masculinity is under constant attack, adding to depression and seriously increased incidence of suicide – an end to family life – population reduction.   And where G-d and religion have been disparaged and removed from daily life, Gates seized the reins.  The schools are collecting unprecedented data from the students for the total regimentation of human society, all linked to the globalist UN Agenda 21.

Bill Gates has admitted to his failed educational experiment, but his underlying goals remain unaltered.  He is undeterred from pursuing another treacherous scheme with impunity.  Not only has he new ideas for the next student generation, which academics already rated inferior, he has assumed a leading role in the coronavirus pandemic, with the ultimate goal of enforced vaccinations with properties that result in sterilization.

The Gates Foundation funds international consortia that influence vaccination policies and disseminate propaganda, despite Gates’s lack of medical background and expertise.  The effort to replace President Trump and capitalism with a new global economy and humanism is supported by the Vatican, George Soros, and Jeffrey Sachs, American economist and special advisor to UN Secretary-General Antonio Guterres on the Sustainable Development Goals.  Their vision is to ensure population control through universal sexual and reproductive “healthcare,” through family planning, abortions, gay marriage, and sterilization.  The globalists are conducting a clandestine war, using misinformation and subterfuge to attain their goals.

Robert F. Kennedy Jr., Chairman, Children’s Health Defense, nailed it in his article, “Gates’ Globalist Vaccine Agenda: A Win-Win for Pharma and Mandatory Vaccination,” dated April 9, 2020.  “Gates has many vaccine-related enterprises that give him dictatorial control over global health, all geared to increase pharmaceutical companies’ profits” (and reduce human life).  Funding $450 million alleged to eradicate polio in India enabled experimentation on 490,000 children who, as a result, became disabled by a Non-Polio Acute Flaccid Paralysis; he and his vaccine program were expelled. India’s Supreme Court is suing the foundation for ethical violations for their 2009 experimentation with HIV vaccines on 23,000 young girls, 1,200 of whom suffered severe side effects and seven died – poor health decreases population.  He has never acknowledged or apologized for his wrongdoing, and he continues to sow pain and death with his pseudo-scientific pursuits, encouraged by pharmaceutical corporations.

Italian Parliamentarian, Sara Cunial, accused Bill Gates of sterilizing millions of women in Africa, paralyzing hundreds of thousands of children in India, causing the coronavirus lockdown and isolation, and violating people’s free will and sovereignty.   She demanded his arrest for crimes against humanity.

In 2002, The Gates MenAfriVac campaign forcibly vaccinated thousands of African children, presumably against meningitis.  At least 40 of the 500 children were left paralyzed and suffering hallucinations and convulsions.  In 2010, the foundation funded a malaria vaccine trial on 5,949 children, ages 5-17 months; 151 African infants died and 1,048 had serious side effects.  A 2017 study showed that 500 African children were vaccinated with DTP vaccine, of which 50 developed paralysis.  Many such experiments are reported as failures from a medical view, but perhaps considered successes from the globalist-eugenicist’s perspective.

With his self-proclaimed vision of saving the world, Gates is collaborating with the government of Bangladesh to establish a means whereby all who are vaccinated are free to return to an active world, their private information held by the globalists; but those who are not immune to disease are penalized, ostracized from society. Bangladesh is hardly technologically equal to an enormously wealthy globalist with authoritarian tendencies. The end game of Gates’s vaccination plan is total power over population size.  More than immunity, “the infamous ID2020” is an electronic identification program using vaccination as a platform for digital identity.  With his history, and fully supported by the UN and civil society, it could carry elements that are destructive to health and the reproductive system.

Closer to home, Gates is partnering with the City of Austin (Texas), working with their vulnerable homeless and 3,000 refugees from the International Rescue Committee in Thailand who are receiving treatment for chronic conditions.  They fall outside the purview of America’s regulations over ethical and safe procedures and are prey to the ID2020 experimentation.

The Global Vaccine Action Plan (announced in 2010) was the discovery, development, and delivery of lifesaving vaccines to the most vulnerable populations in the poorest countries, as agreed by the World Health Organization (WHO), UNICEF, National Institute of Allergy and Infectious Diseases (Dr. Anthony Fauci, director), George Soros, David Rockefeller, Dr. Deborah Birx, Bill Gates’s father, and the Bill and Melinda Gates Foundation – globalists all – who would conspire to peddle vaccines worldwide.  How does one define “lifesaving” when the purpose is population reduction and siphoning riches into the globalists’ coffers?

Consider Hydroxychloroquine (HCQ), which has been used in high dosage on millions of patients worldwide since its FDA approval in 1934 and 1955, with an excellent success rate.  Dr. Vladimir Zelenko used HCQ with Azithromycin, a $20 treatment, on 669 patients, with a 100 percent success rate, their breathing restored within 3 to 4 hours.  When eighty patients and staff members came down with the Coronavirus at a Texas nursing home, HCQ was used for treatment and all but one patient survived (patients were debilitated from other conditions).  Why are Dr. Fauci and Dr. Birx reluctant to admit that an inexpensive drug is successful, and advocating instead for something with the potential of generating enormous wealth for the patent holders?

Dr. Elizabeth Lee Vliet, a woman’s health specialist,  revealed that healthcare workers in several countries are using HCQ prophylactically when dealing with infected patients – which negates the need for expensive preventive vaccinations.  Where HCQ is used worldwide, there is a high patient success rate.  Before this pandemic, “the WHO ranked HCQ as among the safest and most effective medicines in our arsenal!”  The media’s unprecedented fear-mongering is against common sense, except that globalists may be testing and preparing for more fears and greater acquiescence, and that HCQ’s replacement will produce greater profits.

Despite obvious HCQ successes reported, Dr. Fauci repeatedly urged extreme caution, until he had to walk back his skepticism.  He would rather wait months or years to develop another vaccine or recommend Remdesivir, at a cost of $4,460 per ten-day course of medication, with a mere 52% success rate, but of greater financial gain to hospitals.  Project Veritas investigated News York’s higher illness and death statistics and reported that physicians were told to write COVID as the cause of death even if it was the secondary condition. Such protocols yield Big Pharma more federal dollars, and Bill Gates had already begun discussing his mandatory digital-tracking implants.  The power and freedom of the individual is relentlessly being leeched into the globalists’ camp.

Dr. Deborah L. Birx, American physician and diplomat, serving as the Coronavirus response coordinator for the White House, explained that whenever someone dies of any cause but also has COVID19, cause of death must be listed as COVID19.  Many doctors’ objections were overruled.  This deceptive tactic, combined with quarantine, will have fearful people begging for Gates’s vaccinations.

Dr. Judy Mikovits, Ph.D., virologist, has clarified that people do not die WITH, but FROM, an infection.  The deceptive death certificates are financially beneficial to hospitals.  She exposed Dr. Fauci and President Obama as the chief financiers and benefactors of Wuhan’s labs (confirmed by Mayor Giuliani); the virus was lab-manipulated.  Fauci had unethically appropriated Mikovits’s work, delayed testing her findings, thereby killing millions of HIV victims since 1984.  Dr. Fauci has become the trusted voice of medical wisdom; he merits close examination.

In 2006, Mikovits co–founded and developed the first neuroimmune disease, Chronic Fatigue Syndrome, originally dismissed as feminine hypochondria. She later discovered that vaccines were being tested on mouse brains, and were uncontrollably contagious, causing an alarming national health crisis, including cancers and women having children with Autism Spectrum Disorders.  Fauci silenced her and confiscated her computers and notebooks.  He abused his power, misused his office, and removed her funding, which resulted in hundreds of millions of Americans being inoculated with the injurious vaccines.

Leo Hohmann reminds us that the compliance of governors, mayors, church leaders, the richest foundations, and leftist mainstream media, have censored those who would speak against the damage being done to our air traffic system, automobile traffic, food chain, healthcare system, school system, our once-bustling cities – the foundation of our entire society.  Bill Gates and his corrupt associates at the United Nations – World Health Organization medical-industrial complex are responsible for engineering the Great Panic of 2020.

If all the previous information doesn’t alarm, consider this: once we accept the enforced vaccination, the slide into population enslavement will be precipitous and impossible to reverse.  It is becoming more evident that vaccinations are being linked to identification in order to constrain and control human activity.  People who comply with the digital implants will be able to get financing, secure jobs, purchase products, participate in democracy, etc.; those who do not will be pariahs of the state and have their freedoms rescinded. Thus, the world population will be subjugated to the globalist elite, and too many in authority are already wilting before the globalists who are making the most of this crisis to further their agenda.

The damage to the health of countless thousands has been a crime against humanity but the proposed ownership of millions by a few wealthy, influential people will be a crime against heaven.  It must not be permitted, ever.

One thought on “Vaccination and Domination”