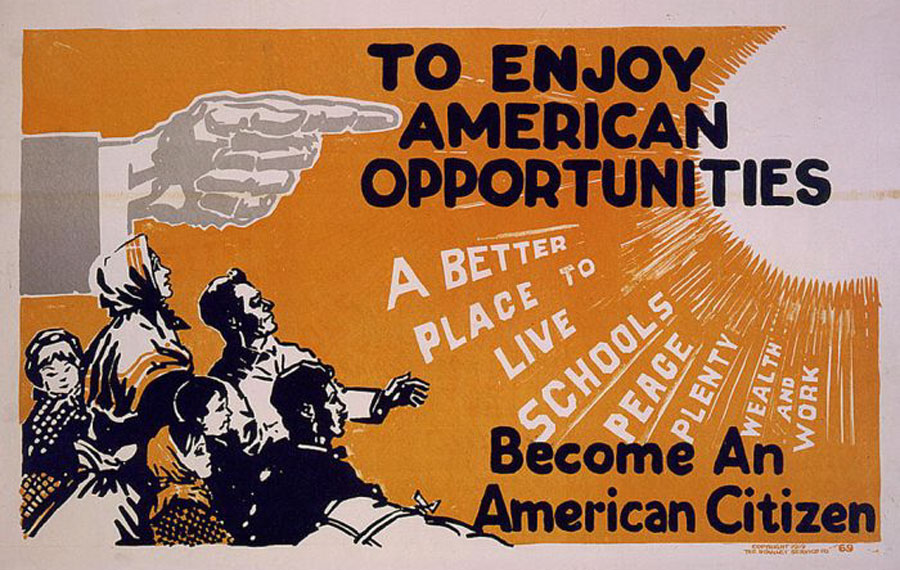 While trying to illustrate why the children of immigrant parents are American, the author unwittingly foils her own corroboration.  This is a review of a children’s propagandist library book.

Our American Dream, sublimely expressed in The Declaration of Independence as “Life, Liberty and the pursuit of Happiness,” is being redefined as “My Life, My Liberty, and My Pursuit of Happiness at the expense of everyone else, if necessary.”  This is the attitude of an untold number of illegals, greedy to consume the hard-won advantages but to not share in the responsibilities.   The American Dream is there for the taking.

Illegal immigration burdens our taxpayers, endangers our nation, and robs our citizens of jobs and higher wages.  Because they do not have a Social Security Number, they do not have to pay taxes.   Programs such as Medicare; Women, Infants, and Children (WIC); the Food Stamp Program, designed to aid Americans in need, are provided to illegal immigrants who meet the poverty criteria.  State program funding is often diverted from public education to compensate for the ever-growing need of relief, as they come with little education and higher risk, at a cost to our nation of $275 billion a year.

Founding Father and 4th US President James Madison wrote, “that as they [aliens] owe, on the one hand, a temporary obedience, they are entitled, in return, to their [constitutional] protection and advantage.” We expect them to live above board, with honesty and legality, and with the expectation that they and succeeding generations will one day inherit this nation from us.  Those were the ideals that helped turn the dream into fact but which are lacking in Marina Budhos’s 2007 fiction, Ask Me No Questions.

Budhos wrote a story for children, 6th grade and up, about a fictional Muslim family, the Hossains, but representative of others that come to America on visitors’ visas and stay past the expiration date, their explicit intention.  The bombing of the World Trade Center and the Pentagon by 19 men from Islamic countries resulted in changes to the US immigration policy, requiring registration by all men over 18 from specified Islamic countries, including theirs, Bangladesh.  The father, Abba, seemingly with nothing to hide, nevertheless did not register, and he, his wife and two daughters, who disrespect our laws and never speak of citizenship, must now live in society’s shadows, while we, the readers, are pressed to be sympathetic.

The Hossains are typical of the many hundreds of thousands of Muslim refugees who came to Europe and the United States from their distant lands when the journey to any of the Gulf States would have been much less treacherous and the culture familiar and comfortable.  They did so, not only because of the obvious advantages to be had in western society, but also to fulfill the Muslim doctrine of migration, Hijrah, which demands that they follow Mohammed’s political ideology of expansion to non-Muslim countries and eventual conquest.  Proving “Islamic superiority” is an Islamic mandate.  if it cannot be done militarily, it will be done demographically through civilizational jihad, and it complies with their long-term view of political domination.  Their older daughter in the Budhos fiction had long ago boasted, “We may be one of the poorest countries in the world, but we’re the richest in brains.”  Such self-conceit provides them with the impetus, the means, and the determination to succeed.

The story opens with Abba, Ma, and their two daughters, Aisha and Nadira, driving north to the Canadian border, where they hope to apply for asylum.  Nadira, the younger, relates that border crossings are so overwhelmed with other illegal Muslim families applying for entry, that they are now being made to return to the States, where they will probably be arrested, perhaps deported.  The author explains that they fear to return to their homeland, where there were bad times with a terrible drought, the loss of their rice staple, starvation during the war years (1943), and the “Partition” that divided the Muslims from Hindus, resulting in deadly riots between the two.  Although the circumstances are undeniably dire, the implication is that they and their lawless society are never to blame and always the victim.  Bringing their lawlessness with them, they refuse to legally apply for asylum, not even for humanitarian reasons.

Uncle and Auntie are also illegal.  Uncle told Nadira of how grandmother was murdered while fleeing to Bengal.  Their own neighbors turned assassins, killed two of their children. Auntie tries to stop his recollections; he is depressed because his friend has also just disappeared, imprisoned by the Immigration and Naturalization Service (INS).  Another disappeared to a New Jersey prison and hundreds of Iranians were deported.   Uncle knows that he, too, may one day disappear, “but don’t worry,” he assures.  Auntie says there are two kinds of people – “those who hear bad news and want to run away and those who dig their feet in and want to fight.”  The fight, presumably, is against the enemy – lawful western society.  Their daughter, Taslima, is a fighter who hopes to marry Tim, “a white guy” lawyer who works for a human rights organization, and despite her illegal status, she expects to study law.  Nadira is learning the ropes, to do whatever it takes to get whatever she wants, even if it’s unethical and in violation of the law.  “My Life, My Liberty, My Pursuit of Happiness.”

Why did the family stay on dishonestly?  “Everyone does it.”  Abba had only to buy a social security number for a few hundred dollars on the Black Market to work at all kinds of jobs – construction, cleaning, deliveries – and blend into the rest of society.  His daughters are doing well in school, and he managed to save $3,000 for college for Aisha, which a friend, Ali, holds for him at the local mosque.  Yes, he admits that he knew it was wrong,  dishonest, and illegal, but he is one of so many illegal families here, in New York.  The author suggests he may be weak, fearful, or wanting to appear the family hero.  Rather, it may be that he is strong and stubbornly determined to follow the Islamic edict and do whatever it takes to accomplish their resettlement.  Further, according to Muslim doctrine, if a person dies while he is away from his hometown, he is considered a martyr.  He doesn’t even have to blow himself up.  As long as he dies on western soil, he is assured of going to heaven.  A win-win situation.

Upon their return entry to the American side, Abba is arrested, the mother is able to take shelter at the nearby Salvation Army, and the daughters must return to Auntie and Uncle.  The girls should not miss school and Aisha has to finish the school year, graduate, and prepare for college.  If they stay in America, she wants Harvard; if Canada, McGill.  She is also being considered for valedictorian of her graduating class, all enabled with taxpayer funding and carefully crafted lies.

The young reader may not grasp the many lies the family has told so as not to be discovered, and will not learn that Islam permits, and even encourages, deception, without shame or remorse.

“He who has done a shameful deed must conceal it, for revealing one disgrace is to commit another disgrace.”

“A concealed shame is two-thirds forgiven.”

“Know that a lie is not wrong… If a lie is the only way to reach a good result, it is allowable.”

(The foregoing  is found on Islam Watch, “Honour and Shame.” )

Tareq enters the story, a high school dropout who drives a souped-up car with tinted windows and a major sound system, always has money in his pockets and an angle in his mind.  As the narration’s foil, he can get her dad a green card.  Budhos, perhaps unwittingly, acknowledges that not all the children succeed in their new home.  Tareq represents the many immigrant youngsters who cannot adjust to American schools or culture and engages in criminal activities – such as the Black Market, rape or grooming, kidnapping girls for sexual enslavement, or terrorism.  These families have not been vetted for character and background.  And what about the Hossains?  Their pride, Aisha, has a false excuse at every turn.  While she may be a good student, she may not be a good citizen, honest, and trustworthy.  She has a strong voice in the family, yet she never felt the need to influence her father to register.

With each event, each effort to seek help from an attorney, director of Homeland Security, her guidance counselor, the girls cannot tell the truth; they practice taqiyyah, Islamic lies for personal gain.  In keeping with the Islamic mindset and projection that had blamed one and all for the problems in their homeland, she now blames their hurt and difficulties on America, rather than on the self-seeking manner with which they approached life here.  Does the author realize that she admits their cultural faults while, at the same time, trying to win over the reader to their way of thinking?

Nadira saves the family by showing that Abba’s savings were indeed not donations for terrorism, as suspected by the authorities, and the misspelling of their surname that results in another chance at  Abba’s appeal for residency.  This is the family’s last chance at honesty and legality.  Aisha was chosen as valedictorian.  Her speech, written by the book’s author, validates the Islamic mindset, never expressing their appreciation, allegiance, or love for the country they will adopt as their own.

“I am an illegal alien. My family came here eight years ago on a tourist visa and we stayed.” (TK – Not admitting illegality or apologizing for breaking the laws of your country.)  “Father worked. He did all the odd jobs; we were the people you don’t always see…and then one day, two planes came and smashed into two towers. A war started.  Overnight we, the invisible people, became visible, dangerous, terrorists. I want a future.”  (TK – This is about me, not that I’ve grown to love America, this school, my fellow classmates; not that I will obey the laws of the land and promise to be a good American you can be proud of.)

And once again, we see projection.  “I tell none of this to make you pity me.  I understand there are bad people in the world.  But you have to understand what happened to my father.  Because for all those years, my Abba – all of us – believed.  They let us in, and they let us believe that we belonged. That we could hope for a future here.  That one day I could go to college and carry on.  And then they took our hope away.  They broke my father’s heart.  And they broke mine. too.” (TK – And they broke our laws, but it is America’s fault, Americans let us in and then disappointed us.  We are the victims – the Islamic mantra.)

The story ends with the family going to the hearing.  They will apply for legal status and citizenship eventually.  The author pleads for the children of illegals, that they have been raised in America and they are Americans – but are they really?