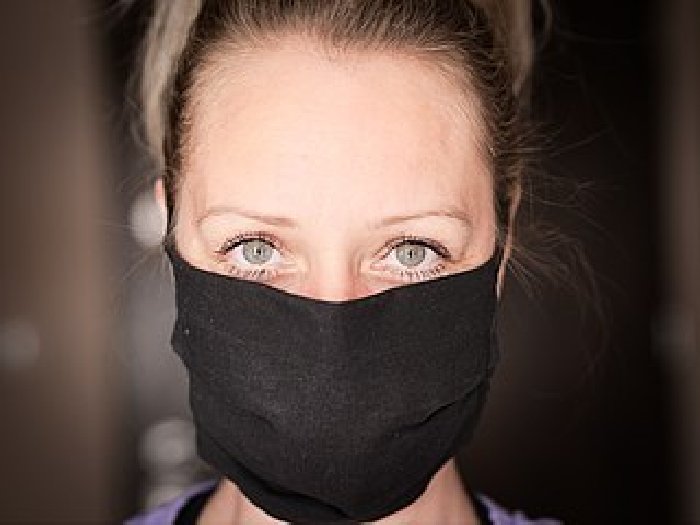 Masks have been a part of societies for 9,000 years. The earliest masks were used for rituals and ceremonies. Later, they were used in hunting, feasts, wars, performances, theaters, fashion, sports, movies, and then as protection against medical and occupational hazards. Masks have become symbols for their various functions.

Different masks worn by different people have different motives. A masked bank robber is very different from a masked Halloween trick-or-treater. Masks are coverings that can also disguise messages. So it is with political masks.

The two most controversial political masks in America today are the Muslim niqab and the COVID19 face mask. What do these seemingly disparate face coverings have in common? Both are marketed as protective face coverings with the connotation of safety, both are worn with pride by their adherents, and both disguise a powerful political message of submission. The mask is the message.

Muslim women following supremacist Islamic religious sharia law are subservient to their fathers, husbands, and brothers no matter where they live in the world, and no matter how protective equal rights laws for women are in the country where they reside. Sharia law does not recognize the authority of the United States Constitution.

Muslim women who embrace sharia law wear their niqabs with pride. They value their submission and, for them, wearing the face-covering is virtue signaling. For most Americans, the face mask worn by Muslim women is a detestable symbol of submission that violates American principles of equality and freedom. It is almost incomprehensible for Americans to understand these Muslim women without understanding that sharia law teaches the supremacy of Islam.

The 1991 Muslim Brotherhood Explanatory Memorandum explains in precise detail the strategic goal for the Muslim Brotherhood in North America. The plan is for settlement, not assimilation. Settlement is another word for submission. In its own words:

“The process of settlement is a ‘Civilization-Jihadist Process’ with all the word means. The Ikhwan [Muslim Brotherhood] must understand that their work in America is a kind of grand jihad in eliminating and destroying the Western civilization from within and ‘sabotaging’ its miserable house by their hands and the hands of the believers so that it is eliminated and God’s religion is made victorious over all other religions.”

For decades the radical leftist Culture War on America has been attempting to collapse America from within and replace our constitutional republic with socialism. The leftist promise is that destroying free-market capitalism and replacing it with socialism will provide social justice and income equality. The radical leftists have a common cause with the Islamists to destroy America from within.

The leftists and the Islamists both have established educational wings to propagandize Americans toward their respective ideologies. They both have established violent paramilitary factions in the United States to terrorize the public and impose their ideologies when persuasion and propaganda are not enough. The Islamists have their jihadis and the radical leftists have ANTIFA and Black Lives Matter (BLM); all unapologetic domestic terrorists. Hawk Newsome, the president of the BLM of Greater New York movement, clarified his willingness to use any means necessary in a jaw-dropping June 23, 2020 interview with Fox News Martha MacCallum on “The Story.”

“You said ‘burn it down, it’s time,'” MacCallum told Newsome.

“I said if this country doesn’t give us what we want, then we will burn down this system and replace it. All right?” he replied.

The radical 2020 Democrat party platform kneels to both radical leftism and Islamism. Blue state governors, mayors, and local Democrat authorities are exploiting the coronavirus with COVID19 mask mandates to prolong the economic shutdown, prevent economic recovery, and collapse the U.S. economy in hopes of defeating Trump in November.

Rahm Emanuel, Barack Obama’s chief of staff, famously said, “You never let a serious crisis go to waste. And what I mean by that is it’s an opportunity to do things you think you could not do before.” The coronavirus outbreak was a bonanza for the radical left, an economic bioweapon unleashed by the communist Chinese designed to collapse Trump’s roaring economy. Political medicine from the World Health Organization (WHO) and the globalist-infested Center for Disease Control (CDC) has been deliberately exaggerating the threat of COVID19 to create panic and social chaos to destabilize the country in advance of the 2020 election.

The stunning June 19, 2020 article by Patrick Wood in Technocracy News, “The Miserable Pseudo-Science Behind Face Masks, Social Distancing And Contact Tracing,” exposes the entire hoax. Wood begins, “Once upon a time, there was something called science. It included the discovery of the truth about nature . . . Then certain other scientists and engineers rose up and made a discovery of their own. If true science was ever-so-slightly skewed and engineering principles were applied to society at large, then they could indeed use their ‘knowledge’ to dominate and control other people, groups, entire societies, or even, heaven forbid the entire planet. The first group pursued science. The second group pursued pseudo-science.”

Patrick Wood explains that pseudo-science is the principal domain of technocrats. The fraudulent predictive models that the WHO and the CDC relied on to terrify the public were developed using politically driven data. The acronym GIGO means garbage in garbage out – it describes with precision British scientist Neil Ferguson’s doomsday pandemic model. Ferguson’s Imperial College report predicted that 2.2 million Americans would die from the virus, that hospital beds would be overflowing, and that there would be a critical shortage of ventilators. The report was used by CDC globalists Fauci and Birx to persuade President Trump to shut down the U.S. economy. Ferguson’s model was also used by the radical leftist Democrat site COVID Act Now that posted the disinformation used by local and state officials in the U.S. to issue shelter-in-place mandates.

Ferguson retracted his wildly inaccurate model but the economic damage was done and the political hysteria continues. The equally fraudulent Institute for Health Metrics and Evaluation (IHME) report from the University of Washington written by institute director Christopher Murray was used by Fauci and Birx to support more political medicine mandating lockdowns to close businesses, schools, and keep people from their right to assembly. The mitigation measures were not intended to flatten the curve, they were designed to flatten America. IHME is committed to globalism and the United Nations 17 sustainable goals.

Medical science does not warrant any of the wildly exaggerated projections or draconian measures, the pseudo-science of political medicine does.

Technocracy is the science of social engineering, the scientific operation of the entire social mechanism to produce and distribute goods and services to the entire population. What this means is that the pseudo-science of leftist “settled science” is being used to achieve the radical leftist political agenda of fundamentally transforming America. Islamists want to make America Muslim. Leftists want to make America socialist.

The Culture War on America is part of the overriding globalist war on American national sovereignty. The leftist, Islamist, globalist, Chinese communist axis participating in the war on America now has its own symbol disguised as public health – the COVID19 face mask. The mandated face mask represents political medicine disguised as medical science. Leftists wear their face masks with pride because, for them, it is virtue signaling.

For those Americans who value their freedom and individual rights, the COVID19 face mask is the symbol of submission to radical leftism. It is almost incomprehensible for Americans to understand the radical leftist commitment to collapsing America without understanding that cultural Marxism teaches the supremacy of radical leftist socialism. A Washington Times article 8.22.2019 written by James Veltmeyer defines the issue.

The enemies of America are exploiting public fear of death and dying for political gain. It is a colossal humanitarian hoax. Mandated masks, mandated social distancing, mandated prolonged business and school closures are sinister efforts to establish a new normal of submission in America. This is how the radical left intends to settle America!

Take off your masks America and refuse to submit!

One thought on “Face Masks: The Radical Leftist Symbol of Submission”