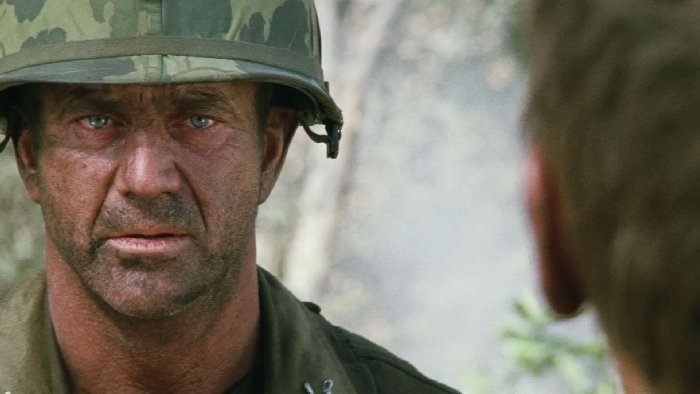 Typical of Day One Chemo, sleeping is a losing battle. So I figured, why not a movie?

I watched it. Gritted my teeth. Wept.

And I wept for Joe. It hit me when he was overwhelmed by freshly showered, wide-eyed, “grown-up” emo journo clowns, stepping off the Sikorsky in a now-safe LZ with questions like “how does it feel?” and various inappropriately loaded questions. And all he could do was stare at them.

And I grasped one of the fundamentals of PTSD watching Hal Moore exhort him to tell the story and confessing his subjective guilt.

And I realized that, of all the war movies I’ve watched, two stand out as “PTSD inducing in the perceptive viewer” class of movie. Yeah, there are others, but two stand out.

The other, for me, is Saving Private Ryan.

The first involves people my own age. I relate way too well to them. They are the reason I did my best to sign up for something non-combat and not over there. And I understood how the active fight against communism (as a general vector, and as the actual foe in real life), while won in numbers on the ground in open combat, was lost to the embedded communists in our own society who succeeded in turning our own culture against our own soldiers, ultimately losing a war the soldiers had actually won.

It brought home my own petty “survivor’s guilt” (yes, something experienced when meeting in person those who did the fighting and the dying, realizing that I was little more than a dabbler in a life and death context) but allowed me to realize that the drive to survive is not a sin, especially when the conflict is largely a politically contrived one. Still, that’s hard to shake if you can’t bring yourself to examine it as raw fact.

The other matter is the punchline of Saving Private Ryan: “Earn this.”

Yes, it was a demand by an individual to an individual, but it can also be the exhortation of those who paid the ultimate price to those of use who would inherit the victory.

And the question one may then ask is, “have we earned it?” Followed by, “are we willing to earn it again, on our own soil if need be?”

We’re the survivors. What we have was bought by our fathers and grandfathers.

Are we willing to forfeit what they bought, accepting the sophomoric sophistry that somehow, by accepting this staggeringly expensive gift, we are de facto unworthy because [insert badly constructed Marxist argument here], and [additional Marxist slogans here] because it’s impolite to respond resolutely (and with violence if needed) against the gleeful, carefully engineered violence perpetrated against us, the heirs of those victories against the tyrannies of the moment?

Can we that easily be persuaded by specious argument that we “don’t deserve” that gift?

Is it really that easy to accept that we should just “hand it over” to the latest band of thugs simply because the thugs in question happen to have staged the battle on our own soil?

The fact that they’ve spent 60 years and billions of dollars building up to this point, infiltrating education and achieving through subterfuge what they could not through a frontal attack, does that legitimize their claim to the prosperity we built in the wake of those conflicts? Simply by slandering us all with ridiculous and entirely false accusations? By hard-selling the specious argument for “the [imaginary] sins of the father …” and therefore those of us who have committed no crime somehow owe a debt to those who have had no crime committed against them?

Against this kind of wholesale dishonesty and targeted violence, are we really ready to roll over and just give the bully what he wants?

Did we earn it?

Or didn’t our progenitors pay enough?

Yes, I know there’s a carefully constructed network of laws that, ironically, can be construed to favor the criminal in this matter, but eventually it will boil down to our cultural ethic and morality and confronting the idea that we can be fenced out of our freedoms and liberties by a tangle of lawyerly contrivances.

Have we become this soft? Are we really no longer worthy?

David Burge (Iowahawk) observed, some time back, something I call “the skin suit proposition,” to wit:

1. Target a respected institution,
2. Kill & clean it,
3. Wear it as a skin suit, while demanding respect.

And the targeted, respected institution has become the American culture as a whole.

In his observation, “kill” is metaphorical.

The metaphor is no longer the shield it was. It has morphed into a more literal proposition.

Where is the threshold? At what point do we reach the cultural equivalent of “fearing for our lives?”

Do we get there while there is still time to act, or when, finally, we are staring up at the barrel of a gun? A real one, not metaphorical?

Flip through a bit of history — the last hundred years should do — before rendering your answer.

And then contemplate, did we earn it? Are we willing to earn it again?

<< This ramble brought to you by Movies And Too Little Sleep. Enjoy. >>