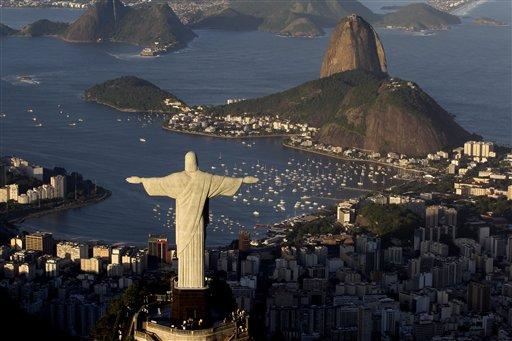 Oh, yes, He was, and as Jesus would pray on the cross on which He was crucified and died for our sins, something which also applies to the Don Lemons of the world, he intoned, “Father, forgive them, for they know not what they do.” Or say.

In defending the destruction of tax-payer funded property, the rioters do not own or honor, even including the Founders and the preservers of our democracy, such as  Washington, Jefferson, and Abraham Lincoln and even to the point of possibly sandblasting Mt. Rushmore, Lemon uttered perhaps the most imbecilic words ever to come out of the mouth of a news anchor:

On Monday, CNN’s Don Lemon undermined his own argument when it comes to removing statues by engaging in what any Christian should consider outright blasphemy. In a truly bizarre moment, the CNN host suggested that the Founders were not perfect … just like Jesus Christ.

“But here’s the thing. Jesus Christ, if that’s who you believe in, Jesus Christ, admittedly was not perfect when he was here on this earth,” the CNN host falsely claimed. “So why are we deifying the Founders of this country? Many of whom owned slaves.”

The Prophet Muhammed owned slaves and partook in the slave trade but Mr. Lemon does not deal with that. Jesus did not own slaves and came to free those enslaved by sin. Now there are no statues of Muhammed to pull down and if there were and someone tried to do that Islamists would pronounce a fatwa to kill them. If you want to tear down a statue of Jesus or try to burn a historic church the likes of Don Lemon and his ilk will not condemn you.

More likely they will applaud you for Jesus is considered by the “woke” crowd to be a white European, which by current definition and insinuation makes Jesus a racist. They do not explain, however, why Joseph and Mary fled with the baby Jesus to Egypt to blend in and not, say, to Denmark.

God knows no color or ethnicity nor does hos son, Jesus. When Jesus assumed human form in order to save us from our sins, the race that was chosen wad all-inclusive – human. 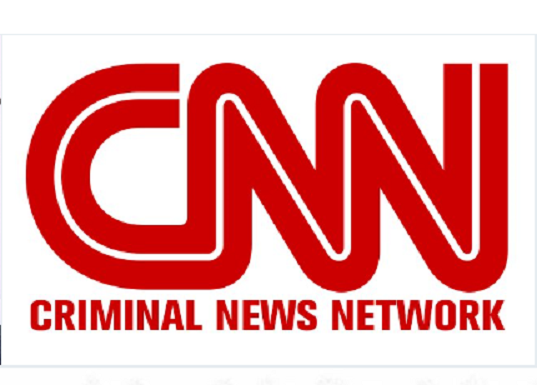 In Don Lemon’s world Islam is a religion of tolerance, not so much Christians President Barack Hussein Obama maligned as “bitter clingers.” Obama took a shot at Christians when he said at an Easter Prayer Breakfast that “…I have to say that, sometimes when I listen to other less-than-loving expressions by Christians, I get concerned.” Not so concerned was he by the mass beheadings of Coptic Christians on a Libyan beach by the Islamic State.

Obama once lectured Christians to “get off their high horse” as they pronounced their teachings to the faithful:

During remarks at the National Prayer Breakfast, President Barack Obama said that all religions had grappled with radical elements attempting to co-opt its spiritual messages, a rebuke to those who want him to more forcefully condemn what they consider a violent extremism inherent in Islam….

“Humanity has been grappling with these questions throughout history,” Obama continued, “and lest we get up on our high horse and think that this is unique to some other place, remember that during the Crusades and the Inquisition people committed terrible deeds in the name of Christ.”

Obama also named slavery and Jim Crow as examples in America, along with religious intolerance “that would have shocked Gandhi” in India.

Religious intolerance? Physician, heal thyself.  Jesus preached peace long before the prophet Mohammed mounted a horse, grabbed his sword, and began beheading infidels on his way to Mecca. As for the Crusades, they came after and in response to centuries of Islamic conquest and aggressive war against the infidels of the Christian West. As Princeton scholar and Islamic expert Bernard Lewis explains, “The Crusade was a delayed response to the jihad, the holy war for Islam, and its purpose was to recover by war what had been lost by war – to free the holy places of Christendom and open them once again, without impediment, to Christian pilgrimage.” According to St. Lois University and Crusade scholar Thomas Madden, “All the Crusades met the criteria of just wars.”

Slavery was an institution supported by Democrats in the South. Jim Crow laws were written by Democrats. Evils may have been committed in the name of Christ, but not at the urging of Christ, who preached peace and love and mercy to one’s enemies.

Jesus Christ was perfect, Mr. Lemon, and if you have any evidence to the contrary you are free to present it. The doctrine of Jesus’ moral perfection is clearly defined throughout the New Testament. Mr. Lemon is free to read it in his spare time. Here is a tiny sample of such verses:

He committed no sin, neither was deceit found in his mouth. 1 Peter 2:22

You know that he appeared to take away sins, and in him there is no sin. 1 John 3:5

For our sake he made him to be sin who knew no sin, so that in him we might become the righteousness of God. 2 Corinthians 5:21

But with the precious blood of Christ, like that of a lamb without blemish or spot. 1 Peter 1:19

For we do not have a high priest who is unable to sympathize with our weakness, but one who in every respect has been tempted as we are, yet without sin. Hebrews 4:15

For it was indeed fitting that we should have such a high priest, holy, innocent, unstained, separated from sinners, and exalted above the heavens. Hebrews 7:26 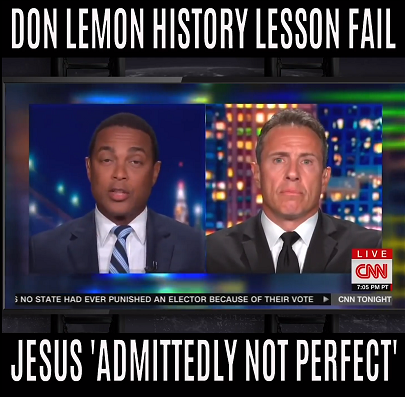 If Jesus Christ is not perfect, then Christianity is a fraud. Perhaps that is what Don Lemon was trying to say. After all, his liberal-left anarchists blame Christianity and Christians for everything from the coronavirus to the oppression of the so-called “indigenous peoples” that long ago migrated over a land bridge from Siberia to North America where they proceeded to make war on one another, enslave one another, and infect each other with their indigenous diseases.

That is why statues of Christopher Columbus are a favorite target. Columbus was a white supremacist European colonialist bringing Christianity and missionaries to oppress and slaughter and destroy the culture of the so-called “native” Americans.

What Columbus and his missionaries brought to the Americas was what we use to call Judeo-Christian values, culture, and civilization, with all its flaws, and with all its blessings. These missionaries included Junipero Sera, who brought Judeo-Christian civilization, who would later become a Catholic saint and, who, yes, brought Western values to California and the missions he founded:

St. Junípero, a Franciscan missionary from Spain, founded nine Catholic missions in California in the late 1700s. His missions helped convert many native Californians to Christianity and taught them new technologies.

Most of the missions he founded would go on to become the centers of major cities in the state, as did other Franciscan-founded missions. The priest carried on his work despite a painful wound to his leg.

He died in 1784 at Mission San Carlos Borroméo del Carmelo in what is now California.

Conservative leaders and commentators predicted that statues of Jesus Christ would soon be on the “woke” hit list, perhaps because He believed, dare I say it, all lives mattered, not just black ones, as did the Christian souls their bodies carried:

When CPAC leader Matt Schlapp warned that “statues of Jesus are next,” some activists expressed a desire to topple statues of the one person in human history who truly is perfect. Then Black Lives Matter activist Shaun King called for statues, stained glass windows, and other representations of “white Jesus” to be toppled or destroyed. When Trump lawyer Jenna Ellis spoke up for Christianity, King attributed her faith to “white supremacy.”

Jesus was the poster child for the ultimate social justice liberals claim to be for except He raised these concepts to a higher and ultimately Divine level – love your neighbor, don’t kill your neighbor, sell what you have and give it to the poor, and the meek shall inherit the earth. Which part of that does Don Lemon have a problem with?

What Don Lemon said won’t be considered hate speech by the “woke” left nor will it be barred or flagged on Twitter, Facebook, and other social media. But it should be.

Don Lemon hates America. He hates Christians and Christianity and the Founders like Washington and Jefferson who firmly believed that our rights came from God, not the government, and that we were endowed by our Creator with certain unalienable rights, among them life, liberty and the pursuit of happiness. Jesus Christ was the Perfect Son of that Creator, Mr. Lemon.

Don Lemon is the leader of a pack of bigoted anti-Christian jackals. By their fruits, ye shall know them.