Calling Christians to prayer and patriots of all kinds to petition 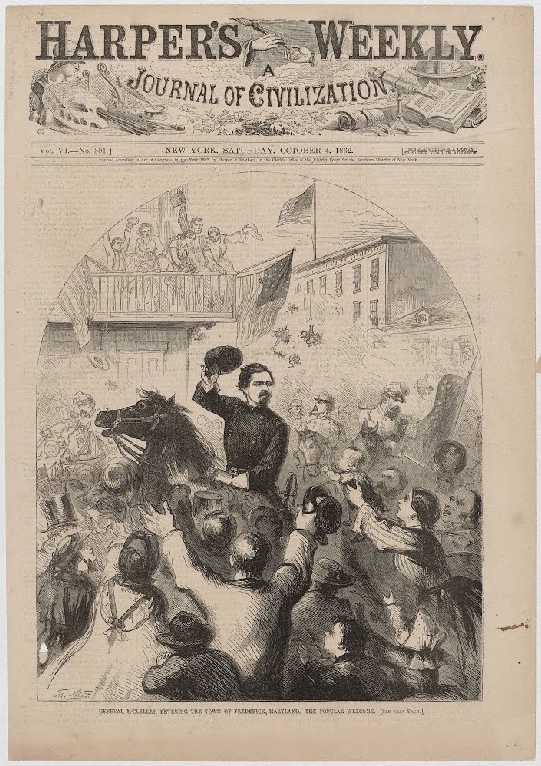 McClellan was popular… at the start of the war.
“General McClellan Entering the Town of Frederick, Maryland—The Popular Welcome, Harper’s Weekly, 4 Oct. 1862,” The Museum of Fine Arts, Houston, TX

They have called it a war, but if so, they are leaving the war strategy against COVID-19 to the confusion of corrupt generals and those field warriors attempting to save lives despite them. At best it is like Gen. McClellan holding up the Grants, Shermans, and Custers, in the Civil War; that was also devious Democrat vs. patriots. At worst, it may be worse than the scheme involving Gen. Benedict Arnold in the American Revolution.

On their watch, that is in the administration of Pres. Trump, and in the Coronavirus Task Force VP Pence directs, catastrophic obstruction has been wrought and profound efforts made in harmful directions, to the enormous potential gains of those seeking global technocratic profiteering and power. Meanwhile, tens of thousands of American civilians are unnecessarily killed. We need a greatly revised and well-articulated war plan. Frankly, we need justice.

Pres. Trump receives lots of cheerleading of various kinds; that’s great. He is also favored with a great deal of prayer, significantly more important; please make it much more. But in social media, for instance, I for one don’t see very much petitioning. Many times, many politicians need to be faced up by the People with reality outside the office and the beltway. Trump and Pence are no exceptions.

In the interest of succinctness and sequence, here is how I put it on Facebook, on the evening of 7/30, pardon the self quoting.

Please join me in intercessory prayer, that Pres. Trump and VP Pence move beyond merely getting the FDA to keep the use of HCQ cocktail preventatives and treatments for COVID-19 from being federally shut down.

They need to aggressively reset policy to give Americans the true top guidelines, suggestions, and support, in order to beat this disease and not subject us to genetically altering vaccine experiments. There is no pandemic where we have safe and effective prevention and treatment engaged.

And there is much more to this than even the tens of thousands of additional lives at stake, as well as those already unnecessarily killed. Much hinges on U.S. policy being reset, immediately, including investigations.

A significant face-up has just occurred by Frontline Doctors, with assistance from Teaparty Patriots (remember the Tea Party?). Their D.C. pressers have raised a great deal of awareness and the Marxofascist censoring of their massively observed communications has brought yet more. The Monday conference also brought a Tuesday audience with Pence and one assistant. On Wednesday, FDA Director Stephen Hahn qualified the June rescinding of FDA authorization for emergency hydroxychloroquine use with a declaration into the breeze that, it’s all “a decision between a doctor and a patient.” Trump spoke again of the use of HCQ treatments, saying “Many doctors think it’s extremely good and some don’t; I think it’s become very political.” Taking it just that far wasn’t all that governmental of you though, Mr. President.

This is not just about the attempts of Democrats to make Trump look bad so they can win an election. That is only one step, along with mass vaccination experimentation and much more. All that is the subject of another article and more, but in the meantime, at the bottom of this one, are links for the consideration.*

Time to heed what Frontline Doctor Simone Gold plead, in the Tuesday presser, “Let’s all tweet the president. Demand hydroxychloroquine…” (Monday and Tuesday presser videos on this Globe & Malevolence page, a bit out of order, Monday AM, Tuesday, Monday PM.) Let’s make phone calls to the White House. Let’s press the president and vice president, too. Letters still carry weight. Let’s do all those people-power things… as the death toll rises.

Clearly, our Gen. McClellan, Anthony Fauci had a big clue of what should have been done early on, since, in 2005, he suggested chloroquine to the world, to fight the coronavirus threat of that time. What had to be done is what still has to be done. The federal government must set harder, authorized, and suggested guidelines for:

God bless you, feds, feel free to add further actually positive measures to the list, rather than, say, torture-murder by high-pressure ventilation, as has apparently been a common cause of many deaths in Cuomo and de Blasio’s New York City (I would much rather take the World Trade Center ride if somehow I had to choose)

Pres. Trump seems to be ducking behind misapplied principles of federalism and deference to a few alleged experts, especially those from prior administrations, such as the NIH’s Francis Collins, NIAID’s Anthony Fauci, and Deborah Birx, and CDC’s Robert Redfield. As with most holdovers from the globalist administrations, they have had years and years to be steeped in influence and payola games. Is it not better to foment the intercommunication of physicians in the field and to establish guidelines by what they mutually find to be successful? That sounds more like America at war in a healthcare emergency. We were never to be a nation of (despotic) ministerial control; that is for communist and fascist nations, which means it’s for no one.

Let us use whatever means we can, to call our Commander in Chief to make aggressive adjustments. And let the Marxstream media, the devil, and the spirit of McClellan take the hindmost.

Also, a White House Petition: “Permitting over-the-counter (OTC) use of hydroxychloroquine (HCQ) to protect against COVID-19 under an emergency EO,” please sign with me, though this is far from enough. Name and email, then verify in your email client, it takes maybe twelve seconds.

Extra Credit: Please ask the Lord above and our public servants down here whether adequate investigations are underway to determine whether Chinese or other agents have been engaged in active measures to spread the SARS-CoV-2 virus.

We close with a glimpse of the state of the art of Mr. Art of the Deal, God bless him. OAN’s 7/30 report on Trump and hydroxychloroquine:

* Here are links to five articles which connect ominous dots and in some cases, speculate upon the grand scheme of which COVID-19 is playing a part:

And here are links for the Christian and/or one whose mind is open to the idea of Godly prophecy in current times. These lead to items by Jeremiah Johnson, not the deceased mountaineer played by Robert Redford, but the Christian minister in Charlotte, North Carolina. He is perhaps the most God-utilized prophet around (accurate, from my perusal over recent years) in the big picture arena of society, government, and politics, as well as that of the Church.

Arlen Williams, GulagBound.com‘s publisher, has been honored to write for numerous venues, to interview Christian and patriot leaders and activists, and to organize electoral volunteers for patriot candidates, sometimes taking part in campaign management. (And he’s had day jobs where he’s actually earned a living.) In: Gab, Parler, Linked-In, MeWe, Twitter, Facebook.