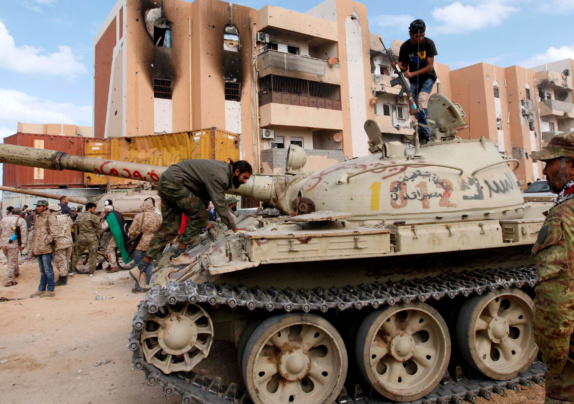 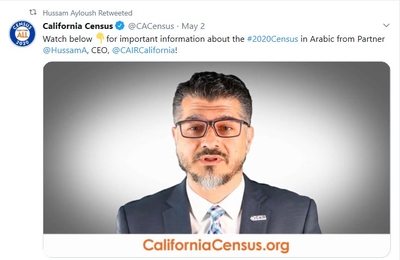 Would someone who believes that ISIS terrorists and the Israeli army are morally equivalent have the kind of judgment to provide “essential” help to the government? What if that some person worked for an organization that the FBI believes is not “an appropriate liaison partner” due to its roots in an American Hamas-support network created by the Muslim Brotherhood; an organization which federal prosecutors say was part of “an ongoing and ultimately unlawful conspiracy to support a designated terrorist organization … a conspiracy from which [it] never withdrew?”

The California Census seems to have no problem partnering with Hussam Ayloush, executive director of the Council on American-Islamic Relations’ (CAIR) Los Angeles office, despite Ayloush harboring ideas a Muslim reformist dismissed as “insane.”

Ayloush reposted an Arabic-language video Monday from the state census office in which he urges people to submit their families’ information. “The census gives us the opportunity to help our families and our communities flourish,” Ayloush says, according to an Investigative Project on Terrorism translation. “Beginning in March we answer nine simple questions which will affect government planning of important programs which touch upon our communities over the next 10 years. Be certain to count those who live with you. Your census responses are safe and secure.”

A complete and fair count indeed is important. The question is why the California Census office felt Ayloush was the best person to serve as a partner?

It’s a choice at odds with the U.S. Commerce Department, which runs the national Census. A year ago, CAIR’s national office announced it was “proud to partner with the U.S. Census Bureau to ensure American Muslims are fairly and accurately counted in the 2020 Census.”

Less than two days after the IPT reported on the partnership, however, pointing out CAIR’s roots in a Hamas-support network and other radical ties, the U.S. Commerce Department dropped CAIR from the Census work.

CAIR was identified as an unindicted co-conspirator in the 2008 Hamas-financing trial against the Texas-based Holy Land Foundation for Relief and Development (HLF). The charity and five former officials were convicted of illegally routing more than $12 million to Hamas.

CAIR has never acknowledged its connections to that Hamas support network, called the Palestine Committee, or tried to argue that it moved away from that support. Its leaders refuse to condemn Hamas. Co-founder and Executive Director Nihad Awad continues to promote anti-Israel rhetoric, calling the Jewish state “the biggest threat to world peace and security” in 2014. Earlier this year, he lumped Zionism, the belief in a Jewish homeland, in with racism and anti-Muslim bigotry.

Ayloush also is openly anti-Israel, and bristles when asked whether Hamas is a terrorist organization.

The California Census office says a “complete and accurate count of California’s population is essential.”

While the Census does not ask about religious affiliation, CAIR officials have exaggerated the size of the American-Muslim population over the years. A 2001 report claimed there were 6 million Muslims in the United States. But a 2007 Pew Research Center report estimated the real number was less than half of CAIR’s estimate – at 2.35 million. That number increased to 3.45 million people in 2017.

California has nearly 40 million residents. It would take a concerted effort to find a more unreliable, divisive partner to speak to its Arabic speaking population than Hussam Ayloush.