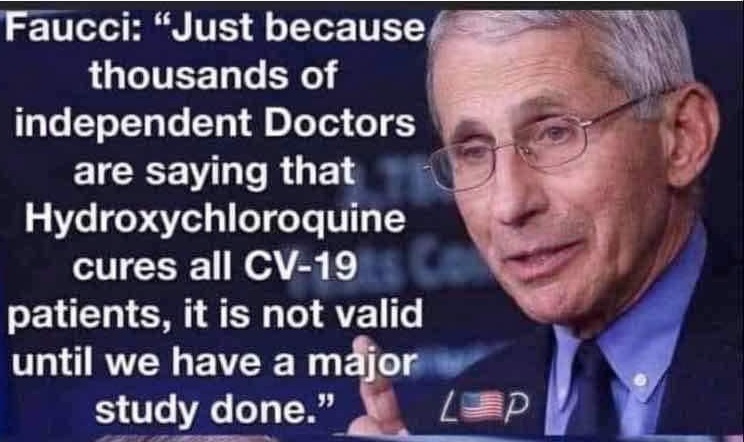 Dr. Anthony Fauci, between magazine photoshoots and throwing the first pitch at baseball games, seems to have forgotten the cardinal rule of medicine – first, do no harm. By downplaying the effectiveness and highlighting the alleged dangers of hydroxychloroquine (HCQ), it can be argued he has cost American lives and will cost more, coming as he has between real doctors and real patients and real-world experience with a drug that has been safely used to treat conditions like lupus and rheumatoid arthritis for six decades without any serious side effects.

Fauci is in love with clinical studies, which are fine for vaccines to determine effectiveness and risk but pale in comparison to the results of actual use.

One can understand the opposition of Big Pharma and Democrats in Congress to HCQ use against the Wuhan Chinese virus. There’s no money in a commonly available drug that costs something like 50 cents a pill. And if its widespread use were as effective here as it has been worldwide, it destroys a key rationale for lockdowns which give liberals the often unconstitutional power to control every aspect of our lives. Worse yet, for some people, it might indeed save a great many American lives and that would improve public perception of President Donald J. Trump’s handling of the crisis and boost Trump’s reelection chances. Can’t have that, even if it costs American lives.

Dr. Fauci, who has not wasted this crisis and has parlayed it into a media career, recently opined on one of the main HCQ opponents, telling the doctors at MSNBC:

“You look at the scientific data and the evidence. And the scientific data … on trials that are valid, that were randomized and controlled in the proper way, all of those trials show consistently that hydroxychloroquine is not effective in the treatment of coronavirus disease or Covid-19,” the director of the National Institute of Allergy and Infectious Diseases said during an interview on MSNBC. 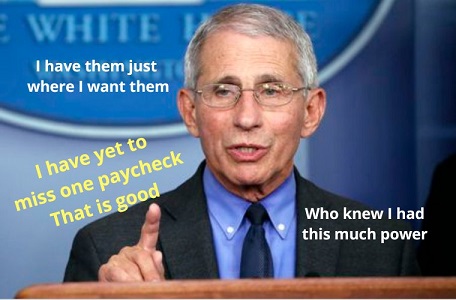 Notice the weasel word “valid.” President Trump has taken HCQ as has the entire subcontinent of India and much of the Third World that uses it widely against malaria. If Dr. Fauci wants an empirical study, this is the mother of all empirical studies. An analysis of Third World COVID-19 mortality rates prepared by Bruce E Dale, Ph.D., University Distinguished Professor, Michigan State University, and Mark A Howard, Doctor of Osteopathic Medicine, had interesting findings:

The US has almost exclusively used HCQ on hospitalized patients, late in the course of infection. These late-stage treatments have largely failed. We (the authors) have the strong impression that acceptance of HCQ has become politicized. We cite below some of the evidence that, in our minds, HCQ has become closely associated with Trump. This unfortunate association has made an objective, scientific evaluation of the risk/benefit ratio for this medication much more difficult…and we believe this has cost and will cost lives.

Tragically, instead of learning from countries that have successfully used HCQ in early intervention and prophylactic treatments, the US is largely denying itself of the life-saving benefits of HCQ. If the US does not make better use of this safe, cheap, and effective drug HCQ to treat COVID-19, we can expect to suffer tens of thousands more deaths than would otherwise occur. What a (completely preventable) tragedy!…

HCQ has been safely and widely used for decades to treat a variety of acute and chronic diseases including: malaria, lupus, and rheumatoid arthritis. It is on the World Health Organization’s List of Essential Medicines, the safest and most effective medicines needed in a health system. The US Veterans Administration alone administers 42,000 doses of HCQ per day.

If we used HCQ the way the rest of the world does, tens of thousands of lives could be saved. As Jim Hoft over at  Gateway Pundit opines:

The latest international testing of hydroxychloroquine treatment of coronavirus shows countries that had early use of the drug had a 79% lower mortality rate than countries that banned the use of the safe malaria drug.

This means that Dr. Fauci, Dr. Birx, the CDC, the liberal fake news media, and the tech giants have been pushing a lie that has had deadly consequences!

Even developing nations Ukraine, Greece, Cuba, Morocco, Indonesia, and Algeria fared better than the US under Dr. Fauci! Over 100,000 US deaths could have been prevented! 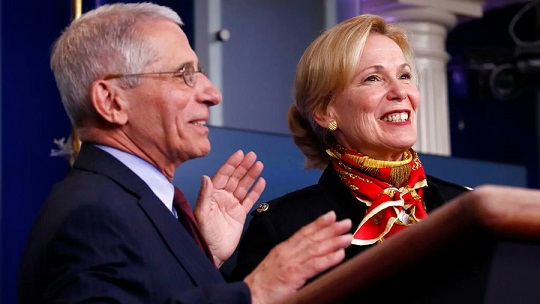 If we continue on Dr. Fauci’s recommended path, these lives will be lost.

A table has been prepared by the American Association of Physicians and Surgeons to compare the deaths per million citizens for countries that have taken different approaches to use HCQ in the treatment of COVID-19. The truth it presents is staggering and damning to Dr. Fauci’s abstinence. The AAPS states:

AAPS concludes that: “the safety of Hydroxychloroquine is well documented. When the safe use of this drug is projected against its apparent effect of decreasing the progression of early cases to ventilator use, it is difficult to understand the reluctance of the authorities in charge of U.S. pandemic management to recommend its use in early COVID-19 cases.”

Yale’s School of Public Health wrote in Newsweek recently that the drug “has shown to be highly effective.” In his Newsweek piece, Risch speaks to the war of hostility against hydroxychloroquine and I suspect one of the problems is that it is an old drug with little profit potential for Big Pharma and the salivating politicians they donate to. Risch notes he is not alone in his conclusions about hydroxychloroquine:

Physicians who have been using these medications in the face of widespread skepticism have been truly heroic. They have done what the science shows is best for their patients, often at great personal risk. I myself know of two doctors who have saved the lives of hundreds of patients with these medications but are now fighting state medical boards to save their licenses and reputations. The cases against them are completely without scientific merit.

Since publication of my May 27 article, seven more studies have demonstrated similar benefits. In a lengthy follow-up letter, also published by AJE, I discuss these seven studies and renew my call for the immediate early use of hydroxychloroquine in high-risk patients. These seven studies include: an additional 400 high-risk patients treated by Dr. Vladimir Zelenko, with zero deaths; four studies totaling almost 500 high-risk patients treated in nursing homes and clinics across the U.S., with no deaths; a controlled trial of more than 700 high-risk patients in Brazil, with significantly reduced risk of hospitalization and two deaths among 334 patients treated with hydroxychloroquine; and another study of 398 matched patients in France, also with significantly reduced hospitalization risk. Since my letter was published, even more doctors have reported to me their completely successful use. 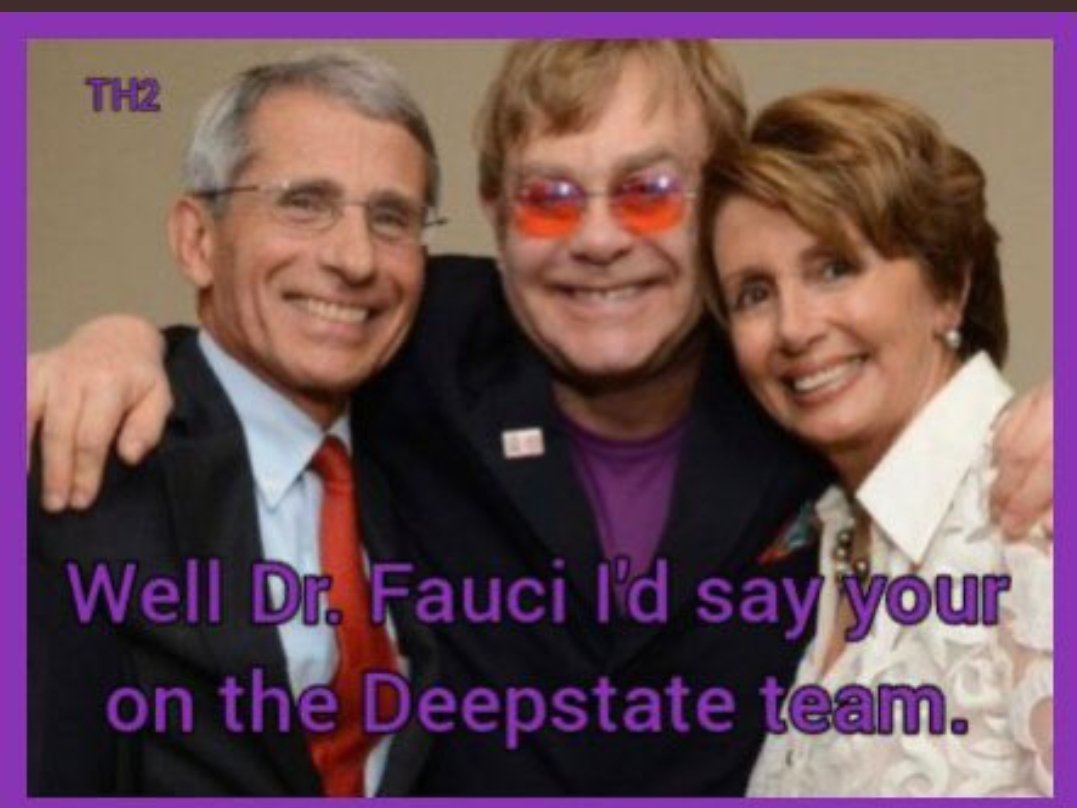 Hydroxychloroquine is not a cure or a vaccine and Dr. Ritsch and the social media censored “Frontline Doctors” do not claim it to be, but the drug which has been safely used over more than five decades has proven in the real world to be safe and useful in lessening the spread and impact of COVOD-19. As Fox News reports:

It is no cure or vaccine but it can save lives – lots of lives. The question then is how many lives have been lost and will be lost due to the words and actions of Dr.Anthony Fauci,