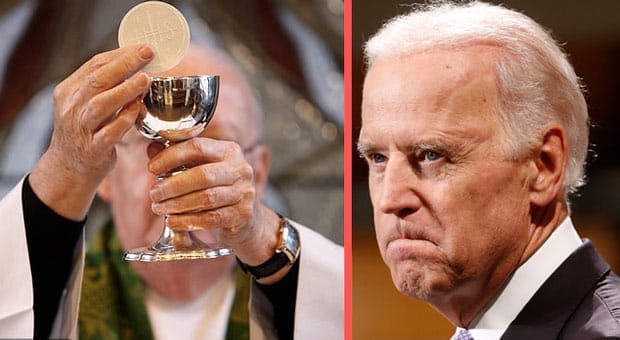 And so is Nancy Pelosi, Dick Durbin, and a bevy of other liberal Democrats who are “personally opposed’ to abortion” while giving lip service to a basic tenet of their alleged faith. To be sure you cannot judge what’s in someone’s heart and soul and you should not judge lest ye be also judged by the same standards. But it has also been said by someone with authority that by their fruits ye shall know and the fruits of the efforts of Joe Biden and others to preserve the “right” to an abortion and the funding of Planned Parenthood has been tens of millions of little corpses and assorted baby body parts that have torn this nation’s moral fiber ad humanity apart.

You cannot accept a moral evil for if you tolerate, even foster it, you are being complicit in it. Democrats don’t accept a Republican saying he or she is personally opposed to slavery or racial discrimination. I, like Joe Biden, am a Catholic, but I unlike Joe Biden, accept the basic tenet that life begins at conception and ends at natural death. The time and means of our passing are determined by God, not by a surgeon’s instruments and that abortion on demand is a moral evil. You cannot choose otherwise and be a Catholic.

That is what former Notre Dame Football coach Lou Holtz said on Wednesday night at the Republican National Convention. He took a lot of heat for it but he was absolutely and eloquently right:

Sharing the ideals of the Catholic university he was a legendary football coach of, former Notre Dame football coach Lou Holtz said Joe Biden and the Democrats are “Catholics in name only.” “Nobody has been a stronger advocate for the unborn than President [Donald] Trump,” Holtz said in an address to the Republican National Convention on Wednesday night. “The Biden-Harris ticket is the most radically pro-abortion campaign in history.”They and other politicians are Catholics in name only, abandoning innocent lives. President Trump protects those lives.” 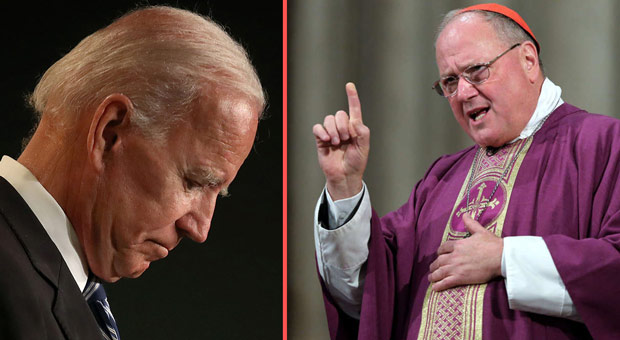 Responding to the inevitable outcry from those who believe all our rights and moral authority comes from government, Holtz defended the truth others can’t handle, truth based on exactly what Catholic teaching says:

In the Catholic Catechism, abortion itself — described as “gravely contrary to moral law” — is classified as a violation of the Fifth Commandment against killing. Catholic clergy have repeatedly condemned both the act itself and abortion-rights political advocacy. Vatican officials have reportedly said House Speaker Nancy Pelosi, D-Calif., should be denied the sacrament of Holy Communion and the last pope — Pope Benedict XVI — personally reminded her of the Church’s stance on the issue during a private meeting.

Joe Biden has been denied Holy Communion in the past for his steadfast advocacy for ending human life in the womb. Biden, while campaigning in South Carolina, presented himself for Holy Communion and was refused communion at the 9 a.m. mass at Saint Anthony Catholic Church where Father Robert E. Morey serves as pastor. As the Christian Post reported:

Morey confirmed with SC Now that Biden was denied the sacrament because of his advocacy for abortion rights. …

“Sadly, this past Sunday, I had to refuse Holy Communion to former Vice President Joe Biden,” Morey told the publication Monday. “Holy Communion signifies we are one with God, each other and the Church. Our actions should reflect that. Any public figure who advocates for abortion places himself or herself outside of Church teaching.”

The rebuke from Morey comes after Biden publicly objected last Wednesday to a proposal to outlaw abortions in South Carolina after about six weeks of pregnancy, including in cases of rape or incest….

He also noted that even though he personally opposes abortion, “I don’t think I have the right to impose my view — on something I accept as a matter of faith — on the rest of society.” 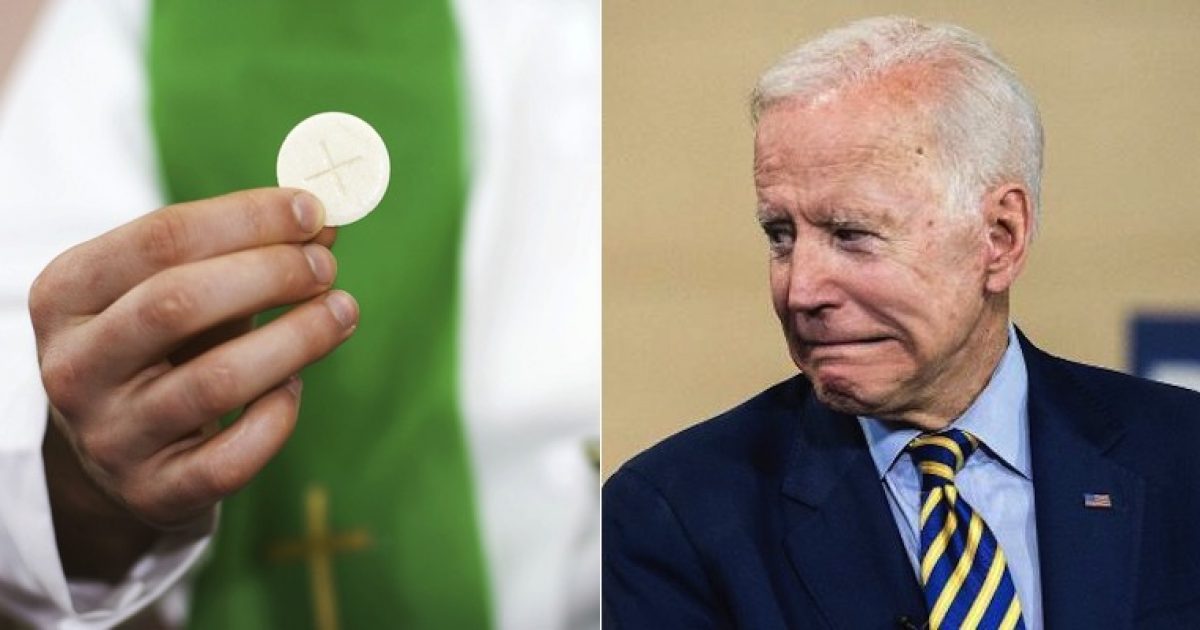 But, Joe,  as a Catholic you are obligated to practice your faith, and spread your faith, to make apostles of all nations.

Your faith is not just a one-hour on a Sunday thing and you are commanded by your Catholic Church and its founder, Jesus Christ, to place the light you have been blessed with high on the nightstand and not hide it under a bushel. Can a politician kiss babies if he believes their birth is a choice like which shoes to wear?

Biden’s target in 2020 is President Donald J. Trump, who has publicly professed that he believes that every human life is a gift from God. Warren, who supports abortion to the moment of birth, denies the humanity of the unborn and their right to life. Does Biden remember the Bible passage where Mary, pregnant with the fetus Christians call Jesus, greeted Elizabeth, and the baby, yes, baby that was to become John the Baptist, lept in her mother’s womb? Does he remember the passage where God reminds us that even before he formed us in the womb, He knew us?

Biden’s faith is very selective. The faith of our Founding Fathers was absolute when they noted in the Declaration of Independence that our unalienable rights came from our Creator and that foremost among those rights, before liberty and the pursuit of happiness, was life.

Joe Biden has the moral spine and religious convictions of a jellyfish. How else to explain the “triple-Axelrod” awarded by veteran operative David Axelrod to this serial groper, who would only have a grasp on reality if it were female, for blindly agreeing to a rope-line question about past support for the Hyde Amendment blocking federal funding of abortion? Axelrod discussed Biden’s remarks with Alisyn Camerota on CNN:

Former Obama campaign manager David Axelrod weighed in on Joe Biden’s position reversal on the Hyde Amendment, which bars federal funding for most abortions, saying it is a “flip flop flip” which highlights some of the larger problems with his candidacy:

DAVID AXELROD: I think that this was a parable about Biden that goes to question marks about his candidacy…. the virtue of having a long record and comforting people and being a figure of stability has the flip side that you have to defend positions that you’ve had over the course of 45 years in politics, some of which may have been acceptable in the day and not acceptable now. We see that on this issue of the Hyde Amendment… Joe Biden was out on the campaign, and he’s not been out that much and a voter challenged him on the question of Hyde, video was rolling, and he said he would reverse this policy…. Then the next day when it came to light the campaign put out a statement and said, no, he still believes in the Hyde amendment. Then there was a furor and last night he flipped again. So that was a flip, flop, flip, which is never a good thing in politics and it raises questions about his own performance and his own steadiness and his campaign’s performance. So this was not a good — you know, beyond the issue itself, this was not a reassuring episode for the Biden campaign. 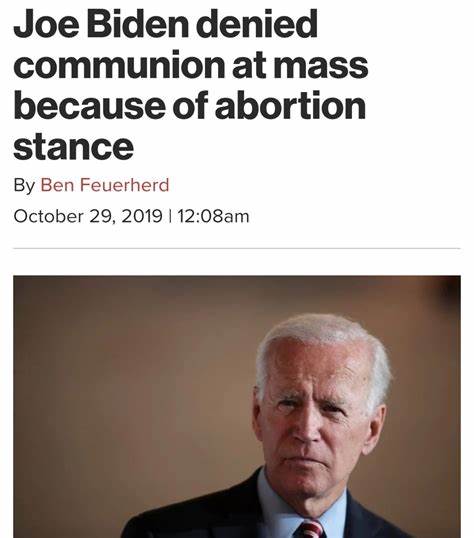 But Biden can no longer fudge the issue. He is the nominee of a party that embraces abortion without restrictions and on-demand from conception to birth and even after birth. He accepts the endorsement of Planned Parenthood and its thirty pieces of campaign silver.

Thankfully, in an age of “cafeteria Catholics” who pick and choose which church doctrines they will adhere to and which they will ignore, an age where we have a Pope Francis who would have us pray for the oceans and invites Amazonian “priests” and their fertility gods into the Vatican, it was refreshing to see a Catholic priest speak truth to power and tell a craven Catholic politician that abortion-on-demand is a moral evil opposed by the Catholic Church and to approve of it means you are unworthy of receiving the Sacrament of Holy Communion.

It was refreshing to see faithful Catholic Lou Woltz who reminded Joe Biden and the rest of us what Catholic teachings and Catholic truths are. It is the truth that will keep us free.