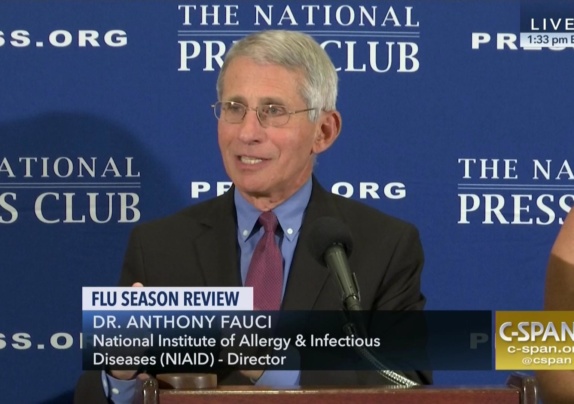 A disturbing pattern of cooperation between Dr. Anthony Fauci’s NIAID and the Chinese military raises questions about technology transfer and the origins of the current COVID-19 pandemic.

One of the inventors of that patent, Shibo Jiang, is a graduate of the First and Fourth Medical University of the People’s Liberation Army, Xi’an, China.

He is a long-time collaborator with institutions associated with the Chinese military and, since 1997, a recipient of U.S. government research grants from the National Institute of Allergy and Infectious Diseases (NIAID), headed by Dr. Anthony Fauci.

In one of the two scientific references used to support the above-mentioned patent “Discovery of diarylpyridine derivatives as novel non-nucleoside HIV-1 reverse transcriptase inhibitors,” Shibo Jiang is listed as a co-author, along with the four other inventors on the patent.

In the Acknowledgments section of that scientific publication, which supports the patent application, three separate NIAID grants are cited, two of which, AI46221 and AI33066, were awarded to co-inventors on the patent, Shibo Jiang and Kuo-Hsiung Lee, respectively.

Shibo Jiang and Kuo-Hsiung Lee are co-inventors on another U.S. patent, 8309602, also assigned to the Institute of Pharmacology and Toxicology, Academy of Military Medical Sciences of China’s People’s Liberation Army.

Although no scientific publications are listed in the 8309602 patent, you can compare the chemical compounds with those in “Diarylaniline Derivatives as a Distinct Class of HIV-1 Nonnucleoside Reverse Transcriptase Inhibitors,” which has as co-authors all the co-inventors of the patent.

That research was also supported by three separate NIAID grants, two of which, AI46221 and AI33066, were awarded to co-inventors on the patent, Shibo Jiang and Kuo-Hsiung Lee, respectively.

NIAID funding of China’s military research programs does not appear to be restricted to those two patents.

Since 2004, Shibo Jiang has had scientific collaboration with Yusen Zhou, who was a professor at the State Key Laboratory of Pathogen and Biosecurity, Institute of Microbiology and Epidemiology, Academy of Military Medical Sciences in Beijing.

Shibo Jiang and Yusen Zhou are listed as co-inventors on at least eight U.S. patents, the references supporting those patents, for example, 9889194, was research funded by NIAID.

Until his recent death, Yusen Zhou’s collaboration with Shibo Jiang continued into the COVID-19 pandemic, publishing a July 30, 2020, Science article together with institutions associated with China’s military.

In a 2014 article, Shibo Jiang was working with the Institute of Biotechnology, Academy of Military Medical Sciences, Beijing.

In 2017, he conducted research with the Translational Medicine Center, People’s Liberation Army Hospital No. 454, and the Department of Epidemiology, Medicinal Research Institute, Nanjing Military Command.

Between 2012 and 2020, Shibo Jiang has published twelve scientific articles with the Wuhan Institute of Virology and eleven articles between 2013 and 2020 with the University of Texas Medical Branch (UTMB), Galveston Texas.

The UTMB has been designated one of the ten Centers for Research in Emerging Infectious Diseases newly funded by a NIAID grant totaling $82 million. UTMB has at least two permanent faculty members trained at China’s Military Medical Universities, has had connections to or former employees from the Wuhan Institute of Virology and Yusen Zhou’s State Key Laboratory of Pathogen and Biosecurity, Institute of Microbiology and Epidemiology, Academy of Military Medical Sciences in Beijing, as well as other Chinese institutions.

Another new center is the EcoHealth Alliance, a long-time collaborator with the Wuhan Institute of Virology, which has been awarded $7.5 million.

Given the history described above and before any new funding is allocated, an investigation and auditing of previous NIAID grants should be undertaken to determine exactly how much U.S. taxpayer money has benefitted China’s military.