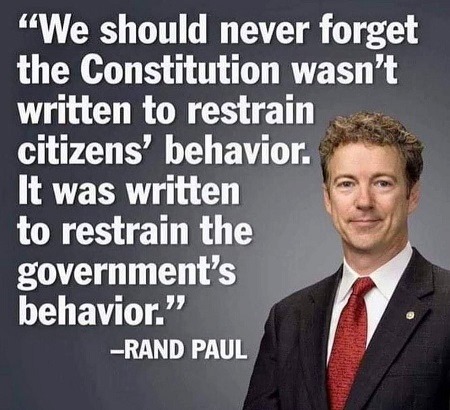 Does the Wuhan virus, which arguably escaped from a Chinese virology lab, supersede the rights guaranteed to American citizens under the U.S. Constitution? U.S. Federal District Judge William Stickman IV has ruled in a case brought before him that there is no pandemic exception to the U.S. Constitution and that the Bill of Rights cannot be trampled with impunity whenever there is a health emergency leftist ideologues try to exploit to impose their desired control over every aspect of our daily lives.  As Reason Magazine reports:

A federal judge on Monday has ruled that lockdown restrictions imposed by Pennsylvania Gov. Tom Wolf (D), including a ban on large gatherings and the closure of “non-life sustaining businesses,” are unconstitutional.

While those restrictions were “well-intentioned,” wrote U.S. District Judge William Stickman IV, “good intentions toward a laudable end are not alone enough to uphold governmental action against a constitutional challenge. Indeed, the greatest threats to our system of constitutional liberties may arise when the ends are laudable and the intent is good—especially in time of emergency.”

In May, Wolf and Pennsylvania Department of Health Secretary Rachel Levine were sued by a coalition of counties, federal and state elected representatives, and several small businesses over the state’s coronavirus restrictions. The restrictions included a shelter-in-place order requiring people to stay in their homes, a closure of all “non-life-sustaining” businesses, and bans on gatherings of more than 25 people indoors, or 250 people for outdoor gatherings….

In regards to restrictions on gatherings, Stickman ruled that these were not “narrowly tailored” but “rather, they place substantially more burdens on gatherings than needed to achieve their stated purpose” of controlling the transmission of the virus….

Stickman similarly ruled that Wolf’s order closing non-life sustaining businesses was also overly broad and arbitrary, and deprived Pennsylvanians of their right to earn a living under the 14th Amendment. Stickman also wrote that population-wide lockdowns are “such a dramatic inversion of the concept of liberty in a free society as to be nearly presumptively unconstitutional.”

Judge Stickman agrees with Kentucky Republican Sen. Rand Paul’s observation in a tweet on Constitution Day about the government taking away our freedoms under the stalking horse of protecting our health:

Again, does the Wuhan virus which arguably escaped from a Chinese virology lab supersede the rights guaranteed to American citizens under the U.S. Constitution? The owners of a New Jersey gym think not. They want to earn a living and pursue their American dream and like most business owners and their customers, they are not stupid, suicidal, or children. They are American citizens who are watching their inalienable rights to life, liberty, and the pursuit of happiness being ripped away by dime-store Napoleons and tyrants who see this pandemic as a chance to pursue the liberal progressive dream of controlling every aspect of our lives:

“We think so far, this has been just a gross violation of constitutional rights,” said Atilis Gym co-owner Ian Smith in an interview with Fox News host Tucker Carlson. “The 14th Amendment states that no state shall pass any law that infringes upon our rights as citizens, and we’ve been forced into our homes. Enough is enough.”

As some states, mostly red states, open up and people begin to regain their lives and their liberty, it is clear this toothpaste is out of its tube. American citizens are as mad as hell and clearly aren’t going to take it anymore. Many, like the Texas salon owner who risked incarceration to feed her children, are not going to wait for an official green light from governors and mayors they feel have no right to usurp their rights or politicians who insist imposing a police state is for our own good, our health, and safety. The owners of the New Jersey gym have found out that the price of liberty is indeed eternal vigilance – and resistance to government tyranny:

A New Jersey gym reopened again Tuesday in defiance of the state’s orders against workout facilities reopening during the coronavirus outbreak and again police arrived to issue tickets to the owners. At least one patron was also arrested leaving the gym after refusing to give his name.

Police also warned supporters gathered outside to leave or they could also face summonses.

“This gathering is a violation of the governor’s order,” Bellmawr Lt. Mike Draham said. “You are directed to immediately and peaceably disperse. If you do not disperse you can be charged. You can protest from your vehicle…That’s all we have right now.”

They also have the frightening words of the Democrat Governor of New Jersey Phil Murphy in a recent interview with Tucker Carlson of Foz News:

Carlson asked Murphy about the arrests in Ocean County, N.J., of 15 men who were congregating for a rabbi’s funeral at a Lakewood synagogue in early April. “

The Bill of Rights, as you well know, protects Americans’ rights — enshrines their right to practice their religion as they see fit and to congregate together to assemble peacefully,” Carlson said. “By what authority did you nullify the Bill of Rights in issuing this order? How do you have the power to do that?”

“That’s above my pay grade, Tucker,” Murphy replied. “I wasn’t thinking of the Bill of Rights when we did this. … We looked at all the data and the science and it says people have to stay away from each other. That is the best thing we can do to break the back of the curve of this virus, that leads to lower hospitalization and ultimately fatalities.”

The very Constitution you took an oath to protect and defend is above your pay grade, Governor? This is the attitude Americans are starting to rebel against. Democrats accused Trump of being a dictator. Governors such as Murphy and many mayors too are little dictators, little Napoleons whose true colors are being revealed, who believe in data and science but not liberty and freedom and not an American people who tamed a continent, split the atom, went to the moon, beat Nazism, Fascism, and Communism.

Thankfully, some courts are beginning to wake up and pay attention to these arbitrary and unconstitutional assaults on our liberties as free Americans unite and pursue legal action. In North Carolina, a District Court judge actually wondered what happened to the concept of equal protection under the law:

Democratic North Carolina Gov. Roy Cooper’s restrictions on indoor religious services show a distrust of those who are worshipping, according to a ruling from a federal judge.

Dever said that Cooper’s stay-at-home order presents a double standard by only allowing up to 10 people at a religious service while letting businesses accommodate up to 50 people at a time….

“The record, at this admittedly early stage of the case, reveals that the Governor appears to trust citizens to perform non-religious activities indoors (such as shopping or working or selling merchandise) but does not trust them to do the same when they worship together indoors,” the judge’s ruling said.

The judge did not mention that under Cooper’s order the Last Supper would be illegal – an indoor gathering of more than 10 people. Freedom of religion is just one of our liberties under assault and preempted by authoritarians like Cooper. Business owners are being effectively deprived of their property without real due process of law, Executive orders are not due process. Our Second Amendment right to keep and bear arms is under assault as “non-essential” gun and ammo shops are shuttered and felons are released to protect them from the virus as we are denied self-protection against them.  We have lost our right to move freely, even speak freely, at least on social media that censors coronavirus response criticisms, or to peacefully assemble and petition for redress of grievances.

In Oregon, another judge similarly ruled the state was exceeding its legal authority by infringing on the freedom of religion:

An Oregon judge ruled today that Gov. Kate Brown’s pandemic-related executive orders exceeded her authority. The case was filed by numerous churches and people of faith who were represented by the Pacific Justice Institute.

The orders resulted in church, business, and school closings and required the citizens in Oregon to remain under virtual house arrest. The Oregon law gives the Governor broad authority in emergency situations; however, that authority is of limited duration. The Governor did not go to the legislature to seek additional time as required by law.

Circuit Judge Matthew B. Shirtcliff granted a preliminary injunction to 10 churches that had sued, finding they had shown “irreparable harm” from the deprivation of the right to freely exercise their religions. 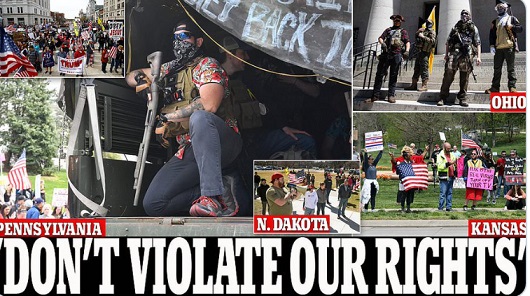 Not overruled at this point is Chicago Mayor Lori Lightfoot, who shut down Windy City businesses and put citizens under house arrest while the “public face of the city,” as she calls herself, went to her hairstylist. Lightfoot has cornered the market on tyrannical hypocrisy:

Churchgoers defying stay-at-home initiatives amid the coronavirus pandemic could receive citations in the Chicago area.

Mayor Lori Lightfoot said last week the city was preparing to enforce restrictions meant to curb the spread of the coronavirus against houses of worship holding in-person services.

After churchgoers decided to attend services anyway on Sunday, Lightfoot said in a statement that city officials are working with law enforcement to monitor large gatherings, including ones of faith, according to the Chicago Tribune.

“The local districts are reviewing reports of large gatherings that took place today at various establishments not abiding by the stay-at-home order,” the statement said. “Following that review, the Department will issue and mail citations where necessary.”

Wisconsin’s Supreme Court recently struck down that state’s stay-at-home order as an unlawful order that exceeded the state’s authority:

The Wisconsin Supreme Court on Wednesday struck down the state’s stay-at-home order during the coronavirus pandemic as “unlawful, invalid, and unenforceable” after finding that the state’s health secretary exceeded her authority.

The order directed all people in the state to stay at home or at their places of residence, subject only to exceptions allowed by Palm, the ruling says. The order, which had been set to run until May 26, also restricted travel and business, along with threatening jail time or fines for those who don’t comply.

So far such rulings and redress of grievances are limited in scope and temporary. The assault on our Constitution and our rights is deep and broad and will only be stopped by a Supreme Court ruling that our freedoms cannot be erased by an edict from a governor, mayor, or even a state health secretary. These orders are not laws passed by a legislature and even then such laws should and must pass constitutional muster. As George Washington University Law Professor Jonathan Turley observes:

“Pandemic is not a magic word that instantly negates all individual constitutional rights,” said Jonathan Turley, a law professor at George Washington University.

“A pandemic gives states a compelling state purpose in the imposition of restrictions. But when the state denies or restricts constitutional rights, it must satisfy a balancing test.”

The orders can be challenged on the basis that they’re overly broad, he said, or that they don’t properly weigh the individual restrictions against public health threats.

Or that lockdowns have health costs themselves that constitute a compelling interest to not have them. Simply put, Americans cannot be deprived of life, liberty, or property without due process of law and, again, executive orders do not constitute due process. There is no pandemic exception clause in the U.S. Constitution.