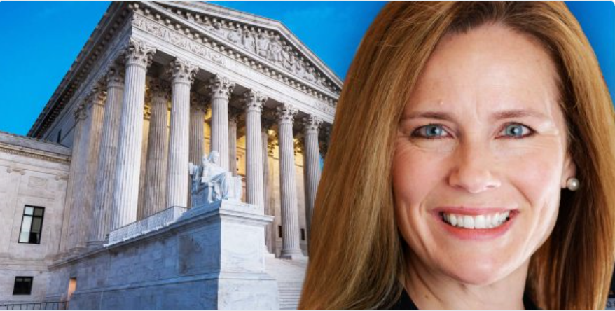 The notion that Judge Amy Coney Barrett of the U.S. Court of Appeals for the 7th Circuit will be President Trump’s third lifetime appointment to the Supreme Court has the liberal progressives in cardiac arrest. They threaten Trump with another impeachment for doing what the Constitution allows him to do – appoint Supreme Court justices and lower court judges (he has done 300 so far) up to the very last second before he leaves office, assuming he is not reelected. But it looks increasingly likely that he will be, particularly if he makes such a stellar pick. Trump has promised to pick a woman, so the likes of Sen. Ted Cruz will have to wait until Trump’s second term.

Barrett is as far from Justice Ruth Bader Ginsburg’s secular progressive and anti-Constitution philosophy as one can get. She does not support abortion on demand and does not want to lower the age of consent so pre-teens can have sex. She’s adamantly pro-life, she is the oldest of seven children and has seven kids herself, two of them adopted Haitian children. She is also Catholic and as such will be and has been a target of the Democrat Party’s virulent anti-Catholic bigotry.

Democratic presidential nominee Joe Biden professes to be a Catholic but he has been denied Holy Communion by a Catholic bishop for his support of abortion on demand up to the moment of birth and has been charged by no less than Notre Dame’s great football coach Lou Holtz as being a Catholic in name only. House Speaker Nancy Pelosi professes to be a Catholic but also supports abortion until birth and complains that Catholics are burdened by what she calls the “conscience thing.” Saying they are Catholic is like saying Judas was an Apostle.

The likes of Dick Durbin and Diane Feinstein are sharpening their knives for Barrett who, while believing Catholic doctrine that life begins at conception and ends at natural death no matter what the government says, has never or is likely to never let that article of faith impact her rulings from the bench. Nevertheless, we have the likes of Feinstein speaking Yoda-like about “the dogma” screaming loudly over Barrett and Durbin who is looking up from gazing at his navel to wonder what “orthodox Catholic” meant during her confirmation hearing for the 7th Circuit:

While ostensibly exploring the nominee’s judicial temperament, Feinstein instead targeted Barrett’s fealty to Catholic teaching. “When you read your speeches, the conclusion one draws is that the dogma lives loudly within you,” Feinstein said. “And that’s of concern when you come to big issues that large numbers of people have fought for years in this country.”

Durbin was even more direct in his roasting of Barrett’s faith. He took issue with the phrase “orthodox Catholic,” which Barrett used in a two-decades-old law review article, on the grounds that it somehow marginalizes politically liberal Catholics: “Do you consider yourself an orthodox Catholic?” Durbin asked her.

Fr. Frank Pavone, national director of Priests for Life, certainly doesn’t think Durbin is one, having expressed the opinion at LifeSiteNews that it would be right and proper for Durbin to be denied a key Sacrament of the Catholic Church, Holy Communion:

We should not see the actions of Springfield, Illinois’s Bishop Thomas Paprocki as extreme for publicly stating that Sen. Dick Durbin is not properly prepared for receiving Communion. Durbin, who lives in the Springfield Diocese, has unapologetically and persistently promoted abortion.

The Democrat senator was one of 14 “Catholics” (and all the Democrats but three) in the Senate who voted in January against protecting babies at 20 weeks of development and beyond from late-term abortion. The bishop has not been extreme at all. In fact, it is encouraging to see bishops boldly doing their job in upholding Catholic teaching….

Perhaps some Catholic-in-name-only politicians fail to see how irreconcilable it is to defend abortion as a right and then to receive Christ in the Eucharist. It is the ultimate contradiction. 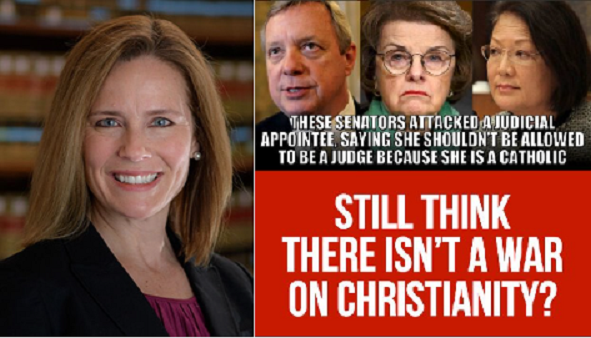 Simply put, an orthodox Catholic is one who accepts the dogma of the Catholic Church in its entirety and the infallibility of the Pope on matters of faith and morals. It does not mean being a “cafeteria” Catholic picking and choosing what will get you elected. This allows Durbin to be “personally opposed” to abortion while doing nothing to stop it. But neither does it mean distorting the law to conform to any particular belief which is what Barrett has told Feinstein she would not do:

What he (Durbin) was getting at, of course, was his own support for abortion, the dogma that lives loudly within almost all elected Democrats these days, and it was hardly made better by Durbin’s declaration that he was the product of 19 years of Catholic education. Feinstein put this bluntly. “You are controversial—let’s start with that,” California’s senior senator told Barrett at the outset of her questioning. “You’re controversial because many of us who have lived our lives as women really recognize the value of finally being able to control our reproductive systems, and Roe entered into that, obviously. … You have a long history of believing that your religious beliefs should prevail.” Actually, Barrett has no history of any such thing. In response to Feinstein, she declined to discuss her personal view of Roe v. Wade, but said simply — and under oath: “I would commit, if confirmed, to follow unflinchingly all Supreme Court precedent.”

Note the use of the word “dogma” in a pejorative sense, as if the Catholic Church was a cult-like the Druids chanting around a fire waiting for the human sacrifice to arrive. Barrett has been slandered as a member of a cult which is in fact a legitimate Catholic faith group: 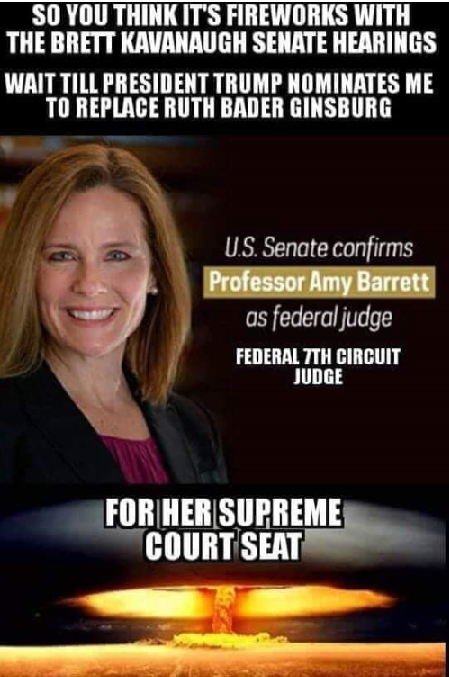 Yes, Barrett believes that Roe V. Wade was wrongly decided and is a decision no more rooted in moral law than the Dred Scott decision. Whether defined as 3/5ths of a human being or not a human being at all, all are fully human in the eyes of the Creator who endowed all with the inalienable right to life. The Supreme Court occasionally gets things wrong and in both these cases, they did. If Roe v. Wade is overturned, it will be because it was badly decided law and the matter returns to the states where it will be voted on by the people and their elected representatives. Voters, as do Presidents, have a right to choose to.

As the National Catholic Register reports, Barrett, who clerked for Justice Antonin Scalia, has been a favorite of Trump, the most pro-life President in American history and the first to appear in person at the annual March for Life in Washington D.C, for quite a while:

According to Axios, Trump reportedly in 2018 told confidantes of Barrett that he was “saving her for Ginsburg” in explanation of his decision not to appoint her to the Supreme Court seat vacated by Justice Anthony Kennedy….

As a nominee to the federal bench, Barrett was pointedly questioned by Democratic senators on the Judiciary Committee in 2017 on how her Catholic faith would influence her decisions as a judge on cases of abortion and same-sex marriage.

Barrett is the mother of seven children, including two adopted from Haiti; one of her children has special needs. She is also reportedly a member of the People of Praise charismatic community, which was criticized as a “cult” during her 2017 confirmation hearings.

Bishop Peter Smith, a member of a related association of priests, told CNA in 2018 that there is not anything unusual or out of the ordinary about the group, which is a “covenant community,” mostly of laity.

“We’re a lay movement in the Church,” Smith explained. “There are plenty of these. We continue to try and live out life and our calling as Catholics, as baptized Christians, in this particular way, as other people do in other callings or ways that God may lead them into the Church.”

Just as John F. Kennedy was said by some to be a stalking horse for the Vatican who would clear each major decision with the Pope, Barrett a practicing Catholic who actually gets it right, was charged with embracing Catholic dogma so tight that there was no room left for the Constitution and those “emanations from a penumbra” that sanctified Roe V. Wade. 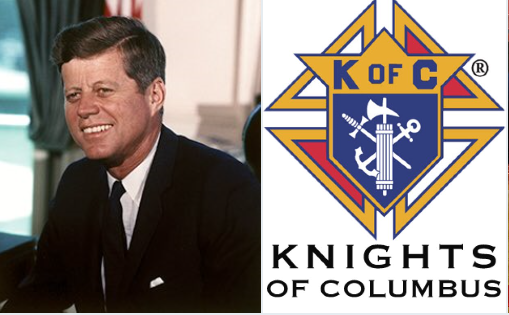 Judge Amy Coney Barrett is not some sort of female Elmer Gantry or just some dogmatic member of a cult. She is a pro-life pro-family woman of faith who believes that faith should have more space and more impact on our daily life than just one hour on a Sunday.

As Chicago Tribune columnist John Kass notes, the anti-Catholic cabal led by Dick Durbin and Diane Feinstein are trying to apply a religious test to this nomination, something that is not permitted by the U.S. Constitution:

Democratic U.S. Sens. Dick Durbin and Dianne Feinstein are applying a religious test to public office, something expressly forbidden by the Constitution. And by their questions to Barrett, they reveal themselves….

This evokes a line of inquiry from an earlier age, one asked of leftists during the Cold War but now directed by the political left at Americans of faith. Concealed in their velvet voices was this meaning, this underlying shiv:

Are you now, or have you ever been, a Christian?

“Do you consider yourself an orthodox Catholic?” cooed Durbin in that oily voice of his….

The Constitution is clear that religious faith may not be used to prevent an American from holding office. But there is another faith now, a strident faith, that of the left, and anyone who stands in its way is to be marked.

Durbin is a Catholic Democrat from blue Illinois, and he seeks votes in Chicago. That he would ask whether someone was an “orthodox Catholic” is stunning.

Chicago is a Catholic town, a Democratic organization town in which parishes helped form the backbone of the Democratic machine. The numbers of church-goers across America is dwindling, including Chicago Catholics.

But there are many who stay true to their faith.

One of them is Amy Coney Barrett, a judicial Joan of Arc who will defend our religious liberty and hers with her last ounce of courage and devotion.