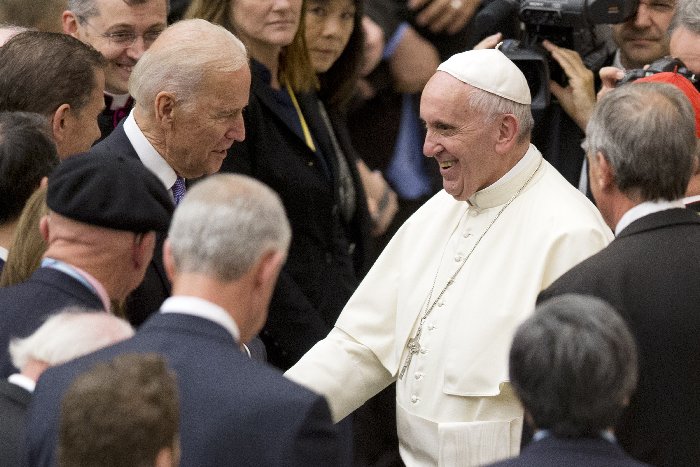 Anti-communist Professor Renato Cristin commented in a recent interview that Pope Francis is the leader of the global left, a fact confirmed by Francis himself when he embraced so-called homosexual civil unions. The only question is whether Francis is a Marxist masquerading as a Catholic, or whether he has somehow in his own mind synthesized Christianity and Communism into a bizarre philosophy of “Christian communism.” Whatever the case, Francis has become a significant impediment to the restoration of the fundamental values of Judeo-Christian civilization.

Cristin is the author of The Masters of Chaos,  a philosophical book on the situation of Europe and the West,  and provides a deep understanding of the mind-set of those seeking to impose socialism on the U.S. and the world.

The United States is today “exposed to a risk it was not prepared for, namely the consolidation of a masked but clearly communist political movement,” he asserts. But how is this possible when a seemingly nice guy like Joe Biden has emerged as the leader of this movement?

A similar question has to be asked about Pope Francis, a nice guy who smiles a lot and seems friendly with people. Cristin comments that “Catholic communism, which is in effect an oxymoron, has become a point of reference for many people throughout the West, forming one of the aspects of neo-communism in circulation today.”

The difference is that Biden, who claims to be Catholic, has obvious mental deficiencies, having been a plagiarist who suffered through brain aneurysms, while Francis is in charge of his mental faculties and knows what he is doing.

Hence, he knows his endorsement of homosexual civil unions is a direct contradiction of what the Congregation for the Doctrine of the Faith taught in 2003, with the authority of Saint John Paul II. It said that “Catholics are obliged to oppose the legal recognition of homosexual unions” and that “Catholic politicians are obliged to do so in a particular way, in keeping with their responsibility as politicians.”

As Archbishop Carlo Maria Viganò has explained, the Francis declaration in favor of homosexual civil unions is designed to purge traditional Catholics from the church and solidify his power. It also seems designed to provide cover for so-called Catholics looking to vote for the faux Catholic Biden, who approves homosexual marriages and actually married two men in a ceremony at one of his lavish homes.

Can you imagine the sick spectacle of “You may kiss the bride,” as two “husbands” tie the knot? Biden, a Catholic, was there as if he were the Justice of the Peace. Leaving aside Catholic or religious teaching, common sense and basic science demonstrate that two men can’t reproduce. It is DNA denial of the most basic form. A gay “union” or “marriage,” therefore, is a denial of biological reality. It represents the destruction of humanity.

This is the diabolical “gender agenda” that Catholic cable channel EWTN has exposed in a sensational new documentary. Titled, “A Wolf in Sheep’s Clothing II – The Gender Agenda,” the film “examines the origins and depravity of the so-called Sexual Revolution, with its current emphasis on gender dysphoria and homosexuality…”

The film also reveals how U.S. seminaries were infiltrated by communists, “who helped usher in the sex abuse crisis which has roiled the Catholic Church in modern times.”

The mere fact that a documentary like this can still be aired in the United States is a sign of hope. Another hopeful sign is the nomination of pro-life and pro-family Judge Amy Coney Barrett to the Supreme Court.

Of course, Biden betrays Catholic teaching on other issues as well, most notably preserving the right to life of the innocent unborn.

For his part, Francis is a committed left-wing ideologue whose ascension to the papacy was itself strange, as Pope Benedict was forced out in what seemed like the kind of coup the American intelligence agencies attempted against President Trump. That makes Francis more dangerous than Biden, a pawn of the same global forces Francis is leading.

The other controversial Francis dictate, criticizing the so-called separation of families at the U.S.-Mexico border, was designed to attack President Trump, when Viganò notes “the reality is that the President is confronting human trafficking and the trafficking of minors.”

Viganò adds that “while conservative American bishops are forbidden from intervening in the political debate in support of President Trump, the Vatican allows itself to casually interfere in the elections in favor of his Democratic adversary, in union with the censorship by social and news media of the very serious accusations against the Biden family.”

The documents acquired by the committee, it said, “shed light on a much broader array of questionable financial transactions involving Hunter Biden, other members of the Biden family, and their associations with foreign nationals. These foreign nationals have questionable backgrounds that have been identified as being consistent with a range of criminal activities, including but not limited to organized prostitution and/or human trafficking, money laundering, fraud, and embezzlement.”

The report added, “Hunter Biden paid nonresident women who were nationals of Russia or other Eastern European countries and who appear to be linked to an ‘Eastern European prostitution or human trafficking ring.’”

Whether proven true or not, it is not debatable that Joe Biden has taken leave of his senses, especially by abandoning his Catholic roots. He has serious family problems that need his immediate attention. He must answer to the reports of Hunter Biden using access to his father to make business deals with China and Ukraine.

Hunter Biden, a former drug addict discharged from the Navy when he was caught using cocaine, may not understand everything he is doing. But you can bet that Pope Francis and Joe Biden’s handlers do.