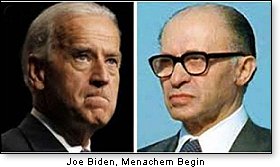 “Don’t threaten us with cutting off your aid. It will not work. I am not a Jew with trembling knees. I am a proud Jew with 3,700 years of civilized history. Nobody came to our aid when we were dying in the gas chambers and ovens. Nobody came to our aid when we were striving to create our country. We paid for it. We fought for it. We died for it. We will stand by our principles. We will defend them. And, when necessary, we will die for them again, with or without your aid.”

Those words were spoken by Menachem Begin in June of 1982, directly to the Democrat senator from Delaware, Joe Biden, who had confronted the Israeli Prime Minister during his Senate Foreign Relations Committee testimony by threatening to cut off aid to Israel.

That’s right, only 32 years after the establishment of the tiny Jewish state, which was surrounded by 22 war-mongering, Israel-loathing Arab states, and only 35 years after the Holocaust savagely murdered––tortured and gassed-to-death––six-million Jewish men, women, children, and infants, Senator Biden was once again terrorizing the Jews of the world with his menacing ultimatum.

Not a fluke, not a misstatement, not an error in judgment, but vintage Joe Biden, whose longtime antagonism and belligerence toward Israel have been exhaustively documented, most recently by Shmuel Klatzkin (Biden’s Hostility to Israel––read the whole article) and Janet Levy in AmericanThinker.com (Is a Vote for Joe Biden in the Interest of American Jews?).

Today, candidate Biden pledges to reopen the Palestinian Liberation Organization (PLO) mission in Washington, D.C. And he vows, incomprehensibly, to rejoin the Iran nuclear deal, in which the most dangerous terrorist state in the entire world has vowed to exterminate the State of Israel.

In addition, Levy points out that while Biden has given lip service to repudiating anti-Semitism, he has been thunderously silent when his fellow Democrats Reps. Ilhan Omar (MN), Rashida Tlaib (MI), Ayanna Pressley (MA), and Alexandria Ocasio-Cortez (D-NY)—and simpatico Jew-hating activists Linda Sarsour, Tamika Mallory, and others––spew their undisguised anti-Semitic bile for all the world to hear. 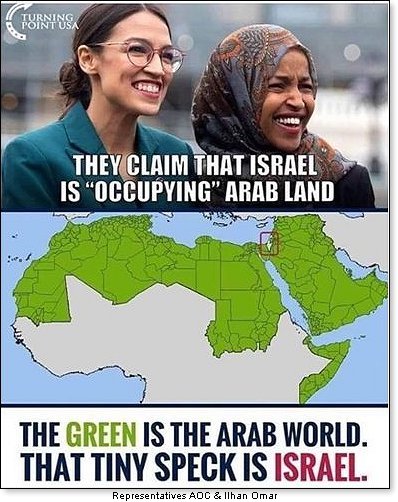 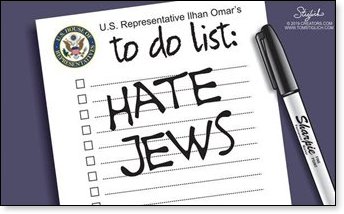 “Biden said he could never be silent on anti-Semitism,” Levy writes, “but raised no objections, as vice-president, to more than 60 White House visits by Al Sharpton, who [had] incited anti-Jewish riots in New York City in the 1990s.” That’s the same Al Sharpton, I might add, who writer John Perazzo documents as being responsible for the horrific Tawana Brawley racial hoax, called the first black mayor of New York City a “ni—er whore,” and delivered a speech at Kean College saying: “We built pyramids before Donald Trump ever knew what architecture was…. [W]e taught philosophy and astrology and mathematics before Socrates and them Greek homos ever got around to it.”

You get the picture of one of Joe Biden’s favorite pals. 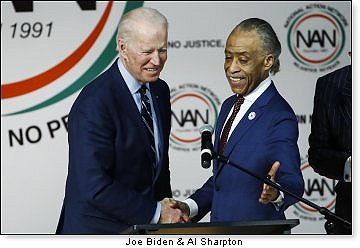 I was a very little girl––younger than six––when I first asked my parents why they were running frantically to meeting after meeting every evening, opening their checkbooks, delivering impassioned speeches, wringing their hands, and shedding copious tears.

They told me what few American-Jewish parents ever told their children, so numb were they from disbelief and so eager to protect them from the ghastly truth, which was that adults and children just like them, just like us––six million of them––had been savagely murdered by Adolph Hitler and his “willing executioners” in Germany, Poland, all over Eastern Europe, and even in “civilized” countries like France, simply because they were Jewish.

Jews who managed to flee Europe and come to America before the Holocaust––like my own and my husband Steve’s grandparents––and those who survived the killing camps and landed on our shores by sheer good fortune thought they died and went to heaven on earth. For the first time in their lives––in fact, in Jewish history––they were free to breathe, to create, to pursue their dreams, to worship, and to raise their children without fear.

Yes, there were things like quotas in colleges and graduate schools, Holocaust denial, and today an upsurge in Jew-hatred, but nothing stopped Jews from succeeding and excelling and contributing disproportionately to American society and to the world, just as the Jews in the state of Israel––only 72 years old––do today.

THE LEGACY OF PERSECUTION

But over 3,500 years of persecution exacts a heavy price. To understand, just think about the long-lasting toll the following events take:

All of the above are life-changing, diminishing, often devastating, sometimes annihilating.

Yet Jews continued on, their survival instinct stronger than the most crushing circumstances of their long and besieged history of being haunted, hunted, and often destroyed in, among other cataclysmic events:

After the Holocaust, American Jews who followed politics––most did and still do today––were forced to ask themselves, and taught their children to ask: Is it good for the Jews? Meaning, will this or that statement or policy or law lead to another Holocaust?

After all, the Jews of Europe in the 1930s and ‘40s enjoyed tremendous success––in business, academia, the arts and sciences, society in general. Unlike the United States today, every college and university did not feature violent anti-Jewish protests or professors who taught anti-Jewish propaganda. Until the rise of Hitler, there were no elected officials––as there are in the U.S. today––spewing Jew-hatred, not only with no disapproval from the powers-that-be but with total impunity.

TO ASK THAT QUESTION TODAY

Is Biden’s candidacy good for the Jews? I can say unequivocally and without hesitation that scandal-plagued Joe Biden, his inexperienced and effortlessly alienating VP pick Kalamity Harris, and the truly regressive Obama-clone platform he’s running on––including high taxes, a weakened military, the support of terrorist groups like Black Lives Matter and Antifa, an anti-fracking return-to-energy-dependence, open borders, confiscation of your guns, and a viciously contentious relationship with Israel––would be terrible for America and disastrous for the Jewish state. 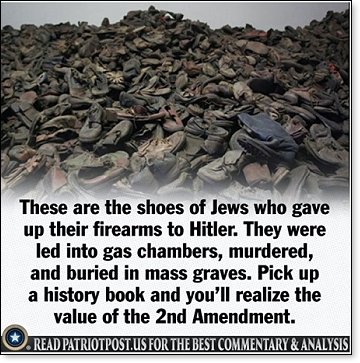 If you’re a liberal American Jew determined to pull the lever or mail a write-in ballot for Biden—don’t!

Don’t be a Jew with trembling knees. Your very survival and that of your family are at stake!