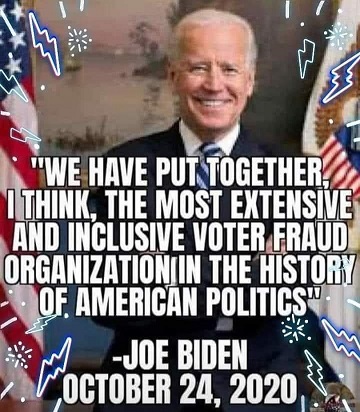 As the 2020 presidential election results are “counted” by political operatives, biased pundits, pollsters, and big tech censors using Common Core math for their projections and tabulations, it becomes clear why Joe Biden hid in the basement and barely campaigned, poking his head up to check on his shadow like that Pennsylvania groundhog who probably voted absentee on Nov. 6. Biden knew he didn’t have to and told us so in advance.

On November 1, just two days before the so-called Election Day, Joe Newby at the Conservative Firing Line posted the video of an incredible Biden admission and reported on a statement hinting that Biden knew that whatever the voters did on election day was irrelevant to the results he was expecting:

While campaigning in Michigan, lying Democrat Joe Biden made an astounding statement.

Say what? His defenders will say, oh, that was just Joe and another meaningless gaffe, but based on the shenanigans, voter fraud, vote counting intimidation, violations of court orders and state laws by Democrats uncovered and documented since November 6, it reads more like a Freudian slip of admission that Joe Biden knew the fix was in. It wouldn’t surprise me if in the trunks of the cars that showed up at Biden’s drive-in rallies were bundles and boxes of Biden absentee ballots waiting to be dumped at the local Democrat boiler room counting facility at 4 in the morning.

Shortly before the election on the Pod Save America podcast, host Dan Pfeiffer was talking to former Barack Obama staffers and Biden, and in perhaps another Freudian slip, essentially admitted his get-out-the-vote effort was really a manufacture-the-vote effort. Biden’s response to one question was telling. as Breitbart News reported:

Secondly, we’re in a situation where we have put together — and you’d [sic] guys, did it for our, the president Obama’s administration, before this — we have put together, I think, the most extensive and inclusive voter fraud organization in the history of American politics.

Click on the Breitbart and Conservative  Firing Line video links before the colluding tech giants scrub them from the web. Biden was active with Obama in leading the attempted coup on Trump. He was in the early January 2017 White House meeting with Obama and suggested that the Logan Act might be used to get incoming Trump National Security Adviser Michael Flynn. He knew the Russian collusion story was manufactured to get Trump. He knew the Ukrainian impeachment hoax was a scam to get Trump even as he hid and obfuscated about his own corrupt Ukrainian quid pro quo crime to save his corrupt son Hunter from investigation and prosecution.

He was there when Obama’s IRS intimidated the Tea Party opposition in the 2012 election so he is familiar with and quite comfortable with using corrupt means to win reelection. That he and his buddies might try to rig the 2020 election is a “well, duh” observation.

Biden knew that the pollsters would put forth fake numbers to gin up corporate, Hollywood, and big tech donor support for himself and other Democratic candidates and suppress the GOP vote. He knew big tech would shut down conservative opinion, even censor President Trump himself, as they throttled the flow of damning truth, including about the Hunter Biden “laptop from hell,” going as far as to shut down the Twiter account of the nation’s oldest and one of the largest newspapers, the New York Post. Biden knew the nightly news would not cover that story or any other hurting Biden’s chances to be President. Biden didn’t have to leave the basement, just make some popcorn and watch the scheme unfold.

There’s a story about the 1960 election in which Team JFK allegedly called up the offices of Mayor Richard Daley the elder inquiring about how many votes the Democratic presidential candidate had. The response by local Democratic officials is said to have been, “How many do you need?” One reporter actually led a story half-jokingly saying, “With 10 percent of the cemeteries reporting…” 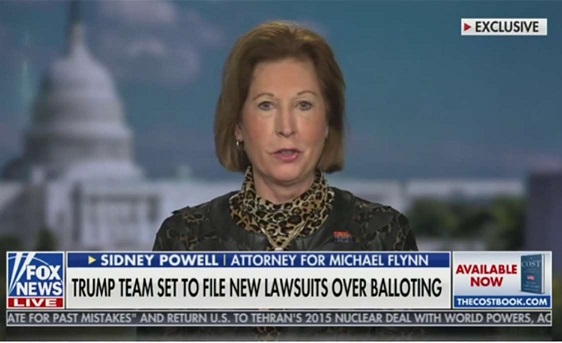 Biden knew that election laws had been altered in his favor or were being ignored to his benefit in key states like Pennsylvania and that election officials in Democratic strongholds like Philadelphia would always decide in his favor. He knew the dead would be allowed to vote and even register and request absentee ballots after they had died. He knew signatures would not be checked, that ballots would be back-dated by election officials, and that Republican poll watchers would be ejected, barred from counting facilities, or otherwise be prevented from observing the counting from a court-ordered distance of 6 feet.

Biden knew that ballot harvesters would go into nursing homes and senior care facilities and tell seniors they would be happy to help them vote and deliver their ballots for them. Biden knew that postal worker unions would lose or toss away Trump ballots.

Examples of planned vote fraud abound… among them strange occurrences that are called computer glitches in a nation that can make smartphones and direct a Mars rover from hundreds of millions of miles away. As Townhall.com reported:

Some reports indicate that mailrooms across the country continue to contain mailed-in ballots that were never delivered to the appropriate precincts. Reports have surfaced that late ballots in some postal stations were fraudulently backdated. In some instances, ballots were allegedly trashed by postal carriers.

Reports show that some software, particularly in Antrim County, Michigan, flipped some 3,000 votes cast for Donald Trump, over to Joe Biden’s side, resulting in a 6,000 vote swing. The software was employed in 47 Michigan counties, so potentially 282,000 votes would have to be subtracted from Joe Biden’s totals and added to Donald Trump’s if the same mistake was made in each of these counties. Worse, many other battleground states employed that software.

In some mysterious dump of hundreds of thousands of votes, Donald Trump didn’t get a single vote – note one. That is statistically and mathematically impossible. On some ballots, it has been reported, the only vote cast on the entire ballot was for Joe Biden. As John Daniel Davidson reports at The Federalist:

As of this writing, it appears that Democratic Party machines in Michigan, Wisconsin, and Pennsylvania are trying to steal the election….

As reporters and commentators went to bed early Tuesday morning, all three states were too close to call, but President Trump led former Vice President Joe Biden by comfortable margins—far beyond what had been predicted in the polls. None of the networks called these states because enough mail-in ballots remained uncounted that it could swing either way, but Trump’s position looked good.

Then, something strange happened in the dead of the night. In both Michigan and Wisconsin, vote dumps early Wednesday morning showed 100 percent of the votes going for Biden and zero percent—that’s zero, so not even one vote—for Trump.

In Michigan, Biden somehow got 138,339 votes and Trump got none, zero, in an overnight vote-dump.

When my Federalist colleague Sean Davis noted this, Twitter was quick to censor his tweet, even though all he had done was compare two sets of vote totals on the New York Times website. And he wasn’t the only one who noticed—although on Wednesday it appeared that anyone who noted the Biden vote dump in Michigan was getting censored by Twitter.

Others were quick to note the partisan censorship from Twitter and raise concerns over how 100 percent of a vote dump could possibly go to Biden. But the social media giant has maintained its crackdown on sharing this information. Twitter users could not like or share a tweet from the Daily Wire’s Matt Walsh noting the 138,339-vote dump. 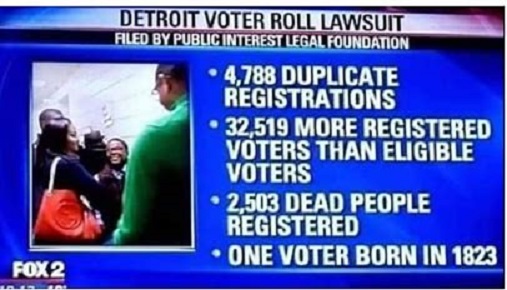 Former federal prosecutor Sidney Powell, who leads the defense of and attempt to finally free Lt. Gen Michael Flynn from the clutches of Biden and his partners in crime in the deep state coup against Trump and who is no stranger to the corruption of activist judges and Democrat politicians, notes that Trump opponents are using specially designed software to hack the election and swing it to Biden:

Powell, the lead attorney for retired Lt. Gen. Michael Flynn, who is helping Trump’s legal effort in the 2020 election, said on Sunday that people with links to top Democrats are using Dominion Voting Systems to commit “fraud” on elections….

Mentioned during a Fox News interview by host Maria Bartiromo were Nadeam Elshami, House Speaker Nancy Pelosi’s former chief of staff who last year became a lobbyist for Dominion, and Richard Blum, California Sen. Dianne Feinstein’s husband, who she said is a significant shareholder in the company.

“They have invested in it for their own reasons and are using it to commit this fraud to steal votes. I think they’ve even stolen them from other Democrats in their own party who should be outraged about this also,” Powell said.

The attorney also suggested that Dominion had a hand in tilting the primaries in Joe Biden’s favor. “Bernie Sanders might very well have been the democratic candidate but they’ve stolen against whoever they wanted to steal it from,” Powell said….

The company, which has a lock on a third of the voting machine market according to Bloomberg, has faced scrutiny in the past couple of days with voting problems reported in parts of Michigan and Georgia, although the company and local officials have discounted the idea that the software was to blame.

Dominion has customers in 28 states and Puerto Rico, including all of the battleground states where Trump and his allies are contesting and pinning their hopes on recounts after media outlets called the presidential race for Biden. 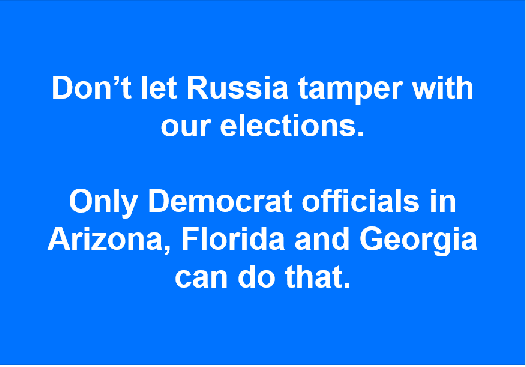 This sure beats hanging chads, doesn’t it? And then there’s evidence that a computer program and software known as “Hammer and Scorecard” may have been used in this and prior elections and against foreign countries to affect election results. Forget those Georgian troll farms Hillary complained about, this is really scary stuff. Sidney Powell spoke recently about this on Lou Dobbs Tonight:

I think there are any number of things they need to investigate including the likelihood that 3% of the vote total was changed in the pre-election voting ballots that were collected digitally by using the hammer program and a software program called scorecard. That would have amounted to a massive change in the vote that would have gone across the country and explains a lot of what we’re seeing. In addition, they ran an algorithm to calculate votes they might need to come up with for Mr. Biden in specific areas. I think that explains what happened in Michigan where the computer glitch resulted in a change of votes of about 5500 in favor of President Trump. All those districts need to be checked for that same, quote, software glitch, end quote, that would change the result in Michigan dramatically. The same thing is happening in other states. We’ve had hundreds of thousands of ballots mysteriously appear solely for Mr. Biden which is statistically impossible as a matter of mathematics. It can all be documented. We are putting it into materials that we will file in federal court, and we need to seek relief in multiple statements to enjoy the certification of any election results.

Joe Biden was aware of these programs and all of these shenanigans when he made his statements. He knew he would win that’s why he stayed in the basement.