Source: A NEW REPORT BY the United States National Academies of Sciences, Engineering, and Medicine, has found that the so-called ‘Havana Syndrome’, which afflicted American and Canadian diplomats in Cuba and China in 2016 and 2017, was likely caused by directed microwave radiation. The study, which was commissioned by the US Department of State, is the latest in a long list of scientific assessments of the mysterious syndrome. The case remains a source of debate in the scientific, diplomatic, and intelligence communities.

In 2017 Washington recalled the majority of its personnel from the US embassy in Havana, and at least two more diplomats from the US consulate in the Chinese city of Guangzhou. The evacuees reported experiencing “unusual acute auditory or sensory phenomena” and hearing “unusual sounds or piercing noises”. Subsequent tests showed that they suffered from sudden and unexplained loss of hearing, and possibly from various forms of brain injuries. In April of 2019, the Canadian embassy evacuated all family members of its personnel stationed in the Cuban capital over similar health concerns. 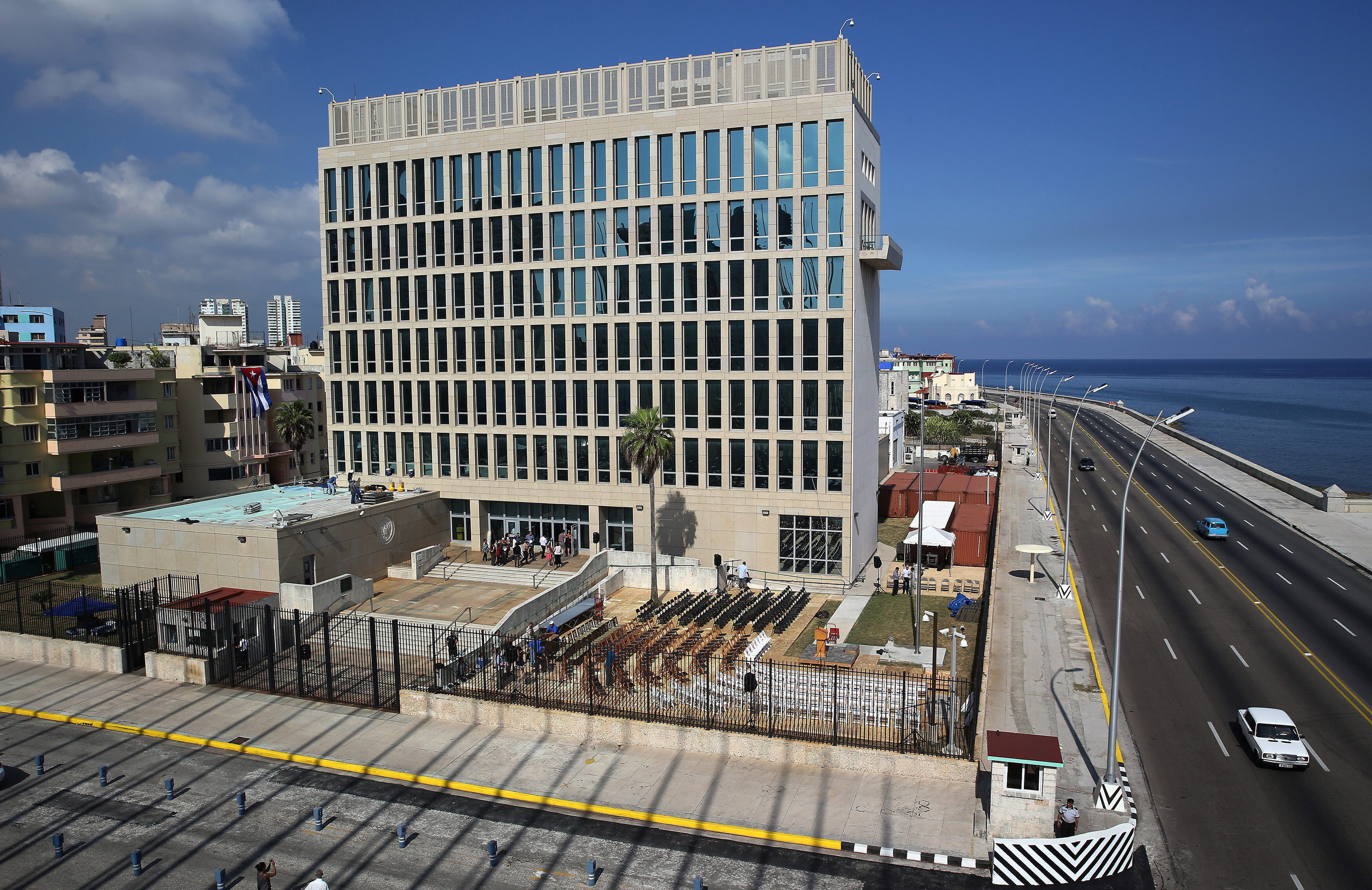 The latest study by the National Academies of Sciences resulted from the coordination of leading toxicologists, epidemiologists, electrical engineers, and neurologists. The resulting 66-page report describes in detail the symptoms experienced by nearly 40 US government employees, who were examined for the purposes of the study. Its authors said they examined numerous potential causes, including psychological factors, infectious diseases, directed radiofrequency energy, and even exposure to insecticides. Ultimately, the authors concluded that “many of the distinctive and acute signs, symptoms and observations reported by [US government] employees are consistent with the effects of directed, pulsed radiofrequency (RF) energy”, according to their report.

However, the study does not attempt to answer the burning question of whether the symptoms experienced by the sufferers resulted from deliberate attacks, and if so, who may have been behind them. Some have accused the governments of Cuba and/or Russia of being responsible for the syndrome. However, the Cuban and Russian governments have strongly denied the accusations. The National Academies of Sciences report does state that the systematic study of pulsed radiofrequency energy has a history of over half a century in Russia and the Soviet Union.

In late 2016, U.S. Embassy personnel in Havana, Cuba, began to report the development of an unusual set of symptoms and clinical signs. For some of these patients, their case began with the sudden onset of a loud noise, perceived to have directional features, and accompanied by pain in one or both ears or across a broad region of the head, and in some cases, a sensation of head pressure or vibration, dizziness, followed in some cases by tinnitus, visual problems, vertigo, and cognitive difficulties. Other personnel attached to the U.S. Consulate in Guangzhou, China, reported similar symptoms and signs to varying degrees, beginning in the following year. As of June 2020, many of these personnel continue to suffer from these and/or other health problems. Multiple hypotheses and mechanisms have been proposed to explain these clinical cases, but evidence has been lacking, no hypothesis has been proven, and the circumstances remain unclear.

The Department of State asked the National Academies to review the cases, their clinical features and management, epidemiologic investigations, and scientific evidence in support of possible causes, and advise on approaches for the investigation of potential future cases. In An Assessment of Illness in U.S. Government Employees and Their Families at Overseas Embassies, the committee identifies distinctive clinical features, considers possible causes, evaluates plausible mechanisms and rehabilitation efforts, and offers recommendations for future planning and responses.

Obama’s normalizing relations did not work out so well. The big question now is whether there is a human rights violation and diplomatic consequence.

We are well aware of the video/scandal by Angela Masden, the restaurant owner of the Pineapple Hill Saloon and Grill forced to close again.

One has to wonder about those campaign contributions from the Hollywood elites to Congressmen Adam Schiff and Brad Sherman, right? Maybe not so much. The Hollywood elites are branded as ‘essential’ during the pandemic lockdowns. Crazy…

So, this soiree was/is for  NBC has picked up a fourth season of Good Girls, from creator Jenna Bans.

Good Girls, whose third season was cut short by the coronavirus pandemic and resulting production shutdown, has done well ratings-wise.

Note that requirements for being essential include… This checklist covers:(1) Workplace policies and practices to protect employee health, (2) Measures to ensure physical distancing, (3) Measures to ensure infection control, (4) Communication with employees and the public, and (5) Measures to ensure equitable access to critical services all of which every business in California, New York, and New Jersey among other states not only meet with compliance, but many of the small businesses go way above and beyond those stipulations.

Further, after watching the video by Angela, note the requirements for catering –>

❑ All actors and crew shall wash or sanitize hands before handling any food. ❑ No buffets allowed. ❑ No communal food or drink service (no coffee pot, no single service coffee maker). ❑ All food and drink must be single serving only. ❑ Craft service dining must be held outdoors.❑Sit-down meals: either require eating in shifts or seating areas large enough to allow for physical distancing of six (6) feet or more. 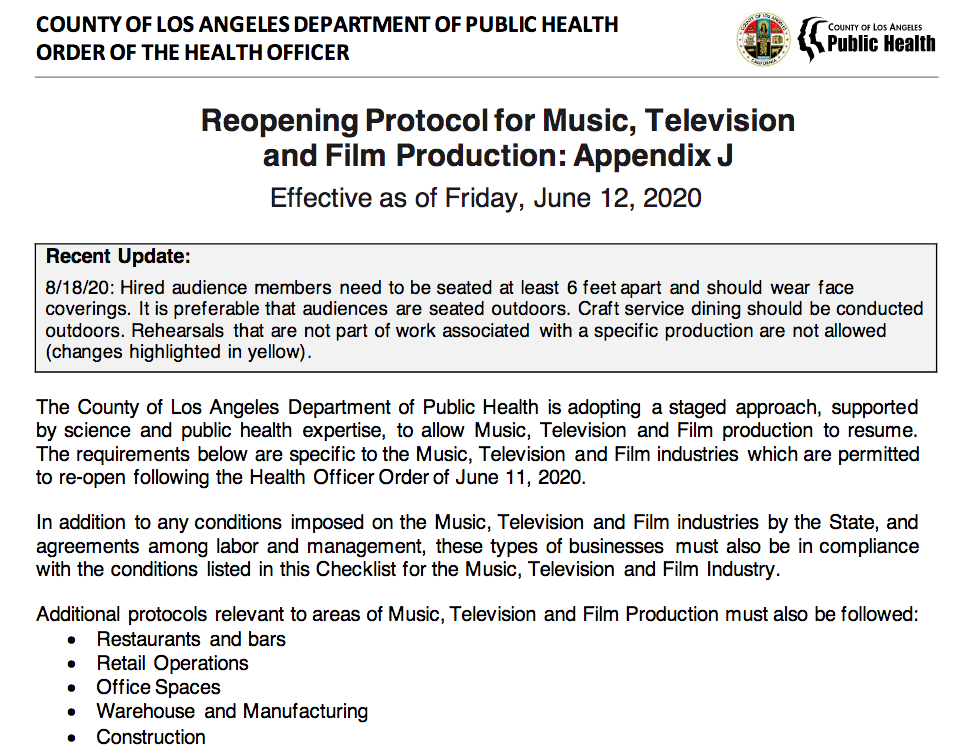