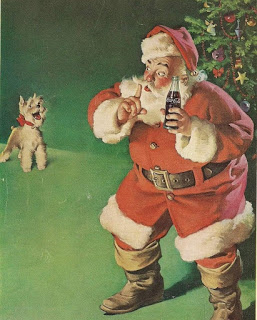 There was a challenge handed out the other day, what did your family do at Christmas?  A handful of memories floating around so I’ll start with writing a wish list.  This was done either on Thanksgiving or very soon thereafter.

We’d jot down, in our very best handwriting, items we considered worthy of asking Santa for. It didn’t matter if the requests were based in reality; but as a rule, these items had been seen on television or in one of the many catalogs, catalogs which many folks referred to as Wish Books.

After completing the assignment we’d place our lists on a plate along with some cookies and a bottle of Coca-Cola.  The idea was to make sure the Big Guy was rewarded for having traveled over to our house and considered our requests.  We were told that Santa wore magic mittens and that while holding up our notes to be read, those mittens would catch the pieces of paper on fire; proof that he’d read them would be ashes left on the plate.

We didn’t need an alarm clock to get up the next morning as we all raced to the dining room table to witness the miracle which had occurred during the night.  There would be a scorch mark on the china and a small clump of burnt up ashes.  It was the beginning of the Christmas Season, official and verified.

My folks must have been gluttons for punishment as they’d also told us that Santa was the one who decorated our Christmas Tree, that all we had to do was pick out a good one, keep it watered out behind the garage until Christmas Eve, and then haul it inside to the living room; Santa would do all the rest.  Once the tree was in the living room it was easy to convince us to get to bed.

I should mention that I learned some of my locksmith trade vocabulary from my father, who never was a locksmith, as he struggled to get the trunk of the tree to fit inside the classic tree stand.  Apparently, other trades, auto mechanics and carpenters come to mind, use similar vocabulary to express frustration.  I later found these magic words remarkably similar to terms used by police officers.

I can’t imagine how late my folks stayed up that night putting lights, ornaments, and tinsel on the tree as they also put together bicycles, dollhouses, wrapped and sorted gifts to be put under the tree, and… I almost forgot, fill our stockings and hang them at the end of our beds.  It makes perfect sense, now that I’ve gotten older, that my folks would want to sleep a little later on Christmas morning as our excitement level climbed slightly higher than the Empire State Building.

We were to wait in their bedroom while my father made sure Santa had actually come.  That translated means he went to the living room and plugged the extension cord into the wall so the Christmas Tree lights would be on when we came in.  Remember, the night before when we’d gone to bed that very same tree was bare; but as we entered the room it was dazzling pure magic.

In my teen years, having pretty much figured out the Christmas magic thing, I remember hearing my father carefully open the door to my room as he carried a stocking to place on the end of my bed.  As he did his best not to make a sound I smiled and respectfully called out to him as he exited, “Goodnight, Santa.”  He smiled back and accepted the fact that I was no longer a little boy, and, as I recall, he even winked back.