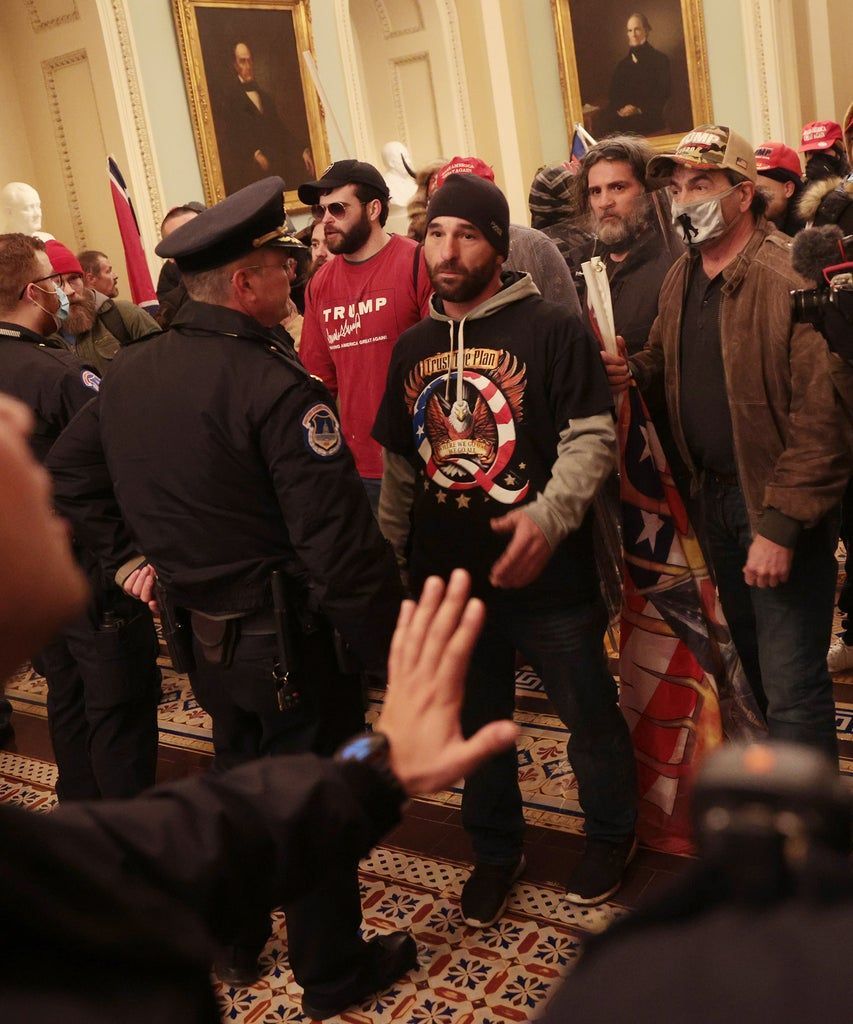 The violence on January 6 was planned ahead of time, and we should not be surprised to learn that the same intelligence agencies that have been trying to bring down the Trump presidency knew about this in advance and were planning to blame it on the president. Evidence has already surfaced — from a liberal media source — regarding FBI knowledge in advance of what happened on Capitol Hill on January 6.

Remember that Democratic Party Senator Chuck Schumer had said, in response to Trump’s criticism of those agencies, “Let me tell you, you take on the intelligence community, they have six ways from Sunday at getting back at you.”

Rushing to judgment on the events of January 6, the ACLU endorsed Trump’s impeachment.

Yet, at the time of Schumer’s comments about the CIA and other agencies getting back at Trump, an ACLU official by the name of Jay Stanley commented, “…if it’s really the case that dissing the intelligence community might result in retaliation by that community against a politician, then the lines of power in our political system have become dangerously distorted.”

That has certainly been proven by the events of the last four years.

He went on to say, “It’s not clear what the ‘six ways from Sunday’ are that Schumer has in mind. Presumably, they could range from antagonistic leaks to concrete actions overseas to undermine a president’s foreign policy, to darker forms of sabotage and blackmail.” He explained that “our spy agencies are professionals at manipulating and interfering with governments — though all such activities are clearly illegal if applied within the United States or to U.S. persons.”

Strangely, in regard to the events of January 6, the Washington Post, a mouthpiece for the CIA, has reported, “A day before rioters stormed Congress, an FBI office in Virginia issued an explicit warning that extremists were preparing to travel to Washington to commit violence and ‘war,’ according to an internal document reviewed by The Washington Post that contradicts a senior official’s declaration the bureau had no intelligence indicating anyone at last week’s demonstrations in support of President Trump planned to do harm.”

This report has all the earmarks of a CIA leak to the paper-based on intelligence information the agency received and passed on to the FBI. It looks like the CIA is trying to fix the blame for failing to prevent the violence on the FBI.

Investigative journalist John Solomon also offers evidence of a planned attack. Hence, it was not a spontaneous riot emanating from Trump’s speech. Such a charge, still popular in the dishonest mainstream media,  was bogus in the first place since Trump had called on his supporters to march to the Capitol peacefully and patriotically.

Even while catching the FBI in a lie about the agency’s knowledge in advance of a planned attack on the Capitol, the Washington Post phrase “in support of President Trump” is misleading, since Trump had no control over the various groups, including Antifa and drug abusers, who showed up.

Cases are too numerous to mention, but one stands out – an arrested protester who was a notorious drug dealer specializing in LSD and marijuana.

We have recorded an interview with an eyewitness on evidence that marijuana smokers, typically on the “progressive” side of the political spectrum, were in force in the demonstration on January 6.

Letting those events proceed without hindrance — and then blaming the violence on Trump — has to now be seen as part of a plan to force Trump to leave office in disgrace rather than allow him to continue the fight for election integrity.

It could be one of the “six ways from Sunday” cited by Schumer.

In addition to foreknowledge of the plot, federal agents may have been conducting agitation and propaganda activities.

“Over the past several weeks,” declared Gab CEO Andrew Torba, “I have been openly warning the Gab community to be on the lookout for fedposters [federal agents posting provocative messages] and threats or encouragement of violence on Gab. This PSYOP campaign started back in early December with newly created accounts popping up out of nowhere and making threats of violence. We have zero-tolerance for this behavior and it is absolutely not free speech.”

Gab is an alternative to Twitter, run by Jack Dorsey, which has censored Trump.

Torba referred to psychological operations modeled after something called “the CIA Mockingbird Media complex” and recorded a video about this, noting how the New York Times provided the initial report blaming Gab for various threats that are then repeated ad nauseam.

Mockingbird, the name of a bird that mimics other bird sounds, is also the name of a CIA project that targets journalists, either through surveillance or their use as intelligence assets, or both.

In practical terms, what we see is that media outlets, seemingly in unison, echo the claim that conservatives, Christians, and other such people are behind any violence which then occurs.

On a deeper level, the plan may be to provoke violence in order to justify a crackdown that gives more power to intelligence and law enforcement agencies to go after Trump supporters.

In a statement, Gab noted the double standard: “Over the course of 2020, political violence across the United States has been normalized by Democratic Party politicians and the mainstream media who excused away and refused to enforce the law against ‘peaceful protestors’ — in reality violent agitators and domestic terrorists — who embarked upon various outrages including the occupation of several square blocks of Seattle, the setting fire to small businesses and federal buildings across the U.S., and yes, even forcing D.C. to board up on more than one occasion.”

Referring to the events of January 6, the statement said, “What happened today is not as unprecedented as the political class would have us believe. This is not the first mob that has attacked a government building in the United States this year — courthouses and police stations all over the United States have been attacked by anti-police activists year-round. Only six months ago, Nancy Pelosi decried law enforcement’s work to stop a dangerous mob from burning down a federal building in Portland as ‘political games’ and ‘abuses of power.’”

All Americans should be demanding that Congress, especially those who voted to impeach Trump on bogus charges of “incitement,” expose the roles of the CIA and FBI in the “insurrection.”