Gotta wonder if the Biden administration or media will attempt to cancel that.

The 45-page presentation is found here. It is beautiful.

We cannot forget that President Trump created the 1776 Commission, a presidential advisory group made of 18 political and thought leaders. This commission is to teach America’s youth about America’s founding. Promise made, promise kept. 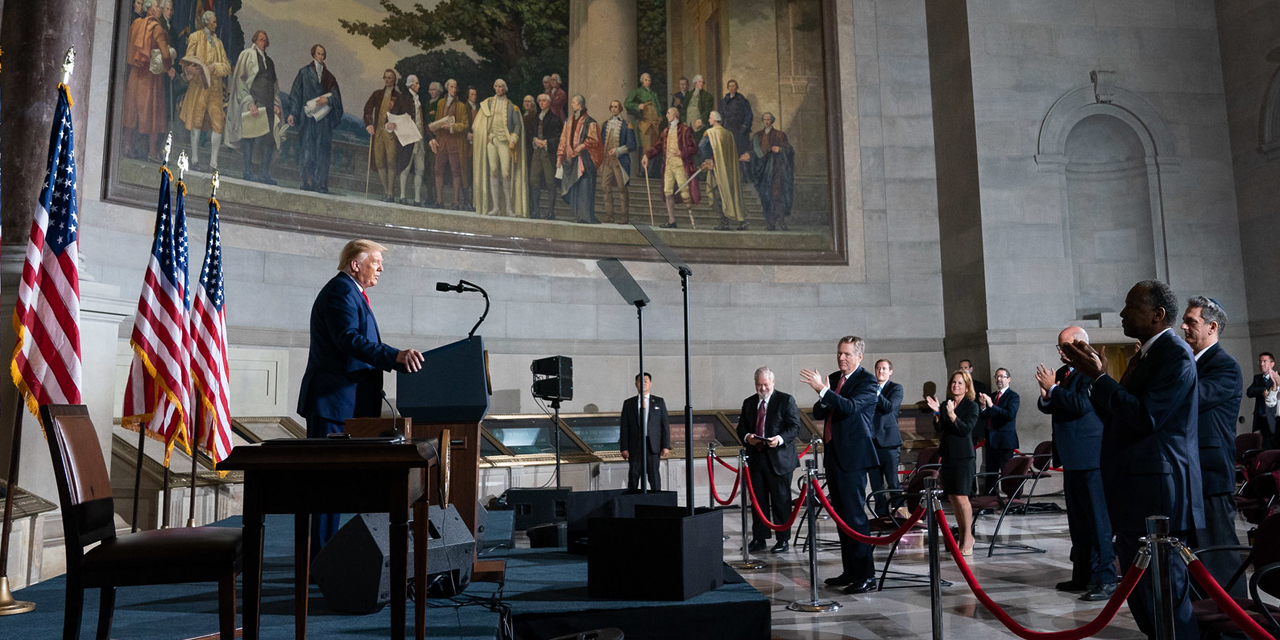 By the authority vested in me as President by the Constitution and the laws of the United States of America, and in order to better enable a rising generation to understand the history and principles of the founding of the United States in 1776, and, through this, form a more perfect Union, it is hereby ordered as follows:

Section 1.  Purpose.  The American founding envisioned a political order in harmony with the design of “the Laws of Nature and of Nature’s God,” seeing the rights to life, liberty, and the pursuit of happiness as embodied in and sanctioned by natural law and its traditions.

The formation of a republic around these principles marked a clear departure from previous forms of government, securing rights through a form of government that derives its legitimate power from the consent of the governed.  Throughout its national life, our Republic’s exploration of the full meaning of these principles has led it through the ratification of a Constitution, civil war, the abolition of slavery, Reconstruction, and a series of domestic crises and world conflicts.  Those events establish a clear historical record of an exceptional Nation dedicated to the ideas and ideals of its founding.

Quite frankly, this project should go way beyond America’s youth, there are adults across the nation that should subscribe as well and especially the media.

Hold on, my friends, to the Constitution and to the Republic for which it stands. Miracles do not cluster, and what has happened once in 6,000 years, may not happen again. Hold on to the Constitution, because if the American Constitution should fail, there will be anarchy throughout the world. Daniel Webster

Appendix III of the document includes in part the following:

Created Equal or Identity Politics? Americans are deeply committed to the principle of equality enshrined in the Declaration of Independence, that all are created equal and equally endowed with natural rights to life, liberty, and the pursuit of happiness.

This creed, as Abraham Lincoln once noted, is “the electric cord” that “links the hearts of patriotic and liberty-loving” people everywhere, no matter their race or country of origin. The task of American civic education is to transmit this creed from one generation of Americans to the next. In recent times, however, a new creed has arisen challenging the original one enshrined in the Declaration of Independence.

It divides Americans into two groups: oppressors and victims. The more a group is considered oppressed, the more its members have a moral claim upon the rest of society. As for their supposed oppressors, they must atone and even be punished in perpetuity for their sins and those of their ancestors. Third, the creed of identity politics teaches that America itself is to blame for oppression. America’s “electric cord” is not the creed of liberty and equality that connects citizens today to each other and to every generation of Americans past, present, and future.