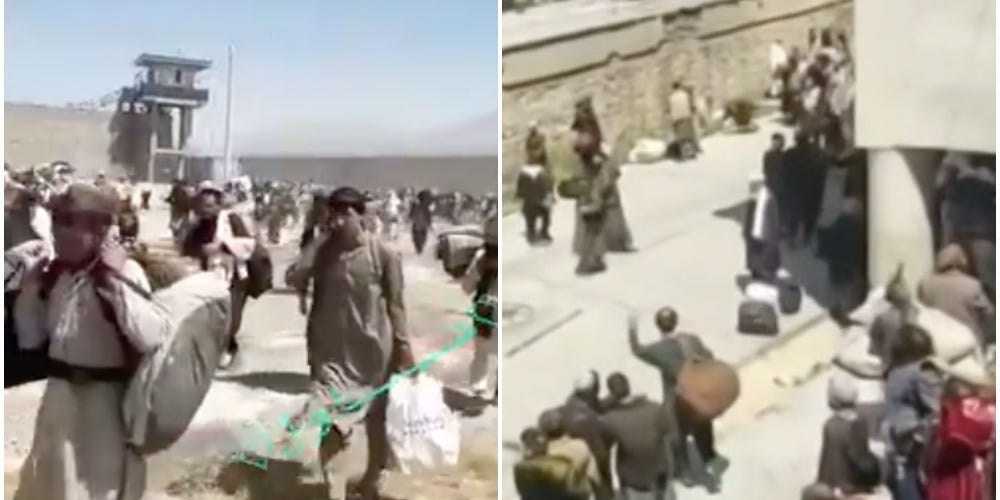 Fox News’ Pentagon reporter Jennifer Griffin asked the Department of Defense press director Admiral Kirby how many prisoners were at the prisons at Bagram. Kirby’s answer was merely thousands, and nothing more specific. To be candid, the military knows precisely how many were there and their full militant criminal backgrounds. This all was until Bagram was turned over to the Afghan forces and subsequently to the Taliban which released all prisoners. In January 2002, the U.S. government began detention operations in Afghanistan at Bagram Air Field in Parwan province. For many years, detainees were held at the Bagram Theater Internment Facility, a converted Soviet aircraft machine plant.

So, what about more details? Well, that prison system was known as Gitmo Part 2 and was pressured to be closed for years. After some open-source investigations, there are some interesting details as follows:

…In 2014, the BBC was finally granted access to a Bagram prison. The Afghan Review Board (ARB), is/was the committee responsible for the prisoner issue, had announced that it would be releasing some of the inmates. The ARB said these men could not be prosecuted because of a lack of evidence.

The Nato-led international peacekeeping force (ISAF) quickly came out and slammed the decision, saying the detainees were dangerous terrorists and had “blood on their hands.”

…Afghan President Hamid Karzai said Bagram is a “Taliban-making factory” where innocent people are indiscriminately mixing with extremists and being indoctrinated. Now that some of these prisoners have been released – some of them to the most troubled regions where the Taliban hold sway – the question is, will American fears be realized?

…Before the prison break, Bagram Air Base, including its prison, which holds 5,000 inmates, surrendered to Taliban control, the Associated Press reported. Bagram district chief Darwaish Raufi said the former U.S. base that held both Taliban and Islamic State group fighters was taken over on Sunday. Other Taliban gains include Afghanistan’s capital city of Kabul after the government collapsed.

…The other large prison was located in Kabul and those prisoners have been released as well. Thousands of inmates, including former Islamic State and al-Qaeda fighters, were released from a prison on the outskirts of Kabul — Pul-e-Charkhi — as well as another facility at Bagram airbase as the Taliban called for a “peaceful transition” of power. source

…Many liberal groups packaged as human rights organizations have long mobilized to close not only Guantanamo but all the prisons in Afghanistan. Now, they seem to have fallen silent given the present conditions in Afghanistan. However, the most disgusting organization advocating for closures of terror prisons which I found somewhat unexpectedly was old man George Soros and his Open Society. Yup….that guy.

END_OF_DOCUMENT_TOKEN_TO_BE_REPLACED

The disgraced former CIA director David Petraeus, once called “America’s greatest living general,” is lecturing America that we didn’t try hard enough at building a democratic Muslim nation in Afghanistan. This retired General cheated on his wife with his biographer, as he bungled the military operation in Afghanistan and then took over Obama’s CIA.

The Wall Street Journal devotes a whole story to the self-righteous ramblings of this man who disgraced the uniform and betrayed his wife but then built a lucrative career in the financial and high-tech world.

The Wall Street Journal story has these headlines: “David Petraeus Reflects on the Afghan Debacle. He offers unsparing words about Trump and Biden, a defense of nation-building, and he says U.S. soldiers may have to re-enter Kabul in force to rescue Americans.”

His role as commander of forces in Afghanistan is just as disgraceful as his personal life.

Under the headline, “China is Big Winner in Afghanistan,” Peter Flaherty of the National Legal and Policy Center notes that with the Taliban takeover and the terror group’s ties to Beijing, China will dominate the economy.  “Afghanistan has significant mineral resources, including rare earth elements, which are increasingly under Chinese control worldwide,” he points out.

But another outcome is China’s control of a narco-state.

The Afghan Army praised by Petraeus developed a reputation as the “Hashish Army,” as many in the Afghan army and police forces were taking drugs and engaging in pedophilia. A Journal article from 2010 noted, “Use of marijuana, opium, and heroin among Afghan troops, even while on patrol, is just one of the challenges coalition forces face in working with the Afghan National Army…” A 2013 documentary,  “This is What Winning Looks Like,” showed Afghan soldiers using drugs as evidence surfaced of Afghan police commanders sexually abusing young boys.