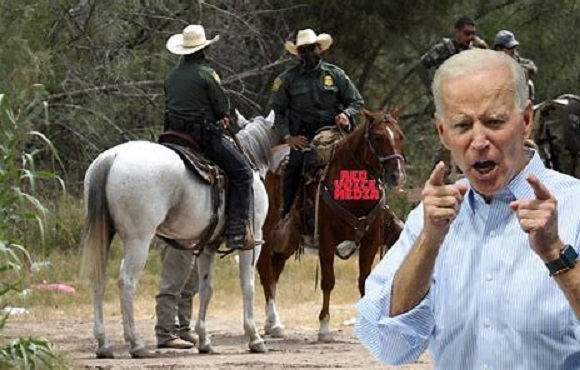 A horse is a horse, of course, of course, and no one can talk to a horse, unless, of course, that talking horse is the famous Sleepy Joe.  Let out on work release by the handlers he always says he will get in trouble with, Dementia Joe Biden addressed a handful of carefully selected reporters with prepared questions and promised that those responsible would be punished and there would be consequences.

Oh, no, not those responsible for flooding our borders with untested, unmasked, and unvaccinated illegal aliens and then shipping them at taxpayer expense to communities around the nation where they are free to wander, burden our health, education, and criminal justice systems when they commit crimes. Want to witness the mother of all super-spreader events? Just look at the border that Joe Biden has flung wide open.

Certainly not those responsible for the Afghanistan withdrawal debacle which created a terrorist state armed with billions in state-of-the-art American weaponry that has resumed public executions, getting 13 U.S. servicemen needlessly killed, and then flying out hundreds of thousands of untested, unmasked, unvaccinated, and unknown refugees as American citizens were shamelessly left behind.

Joe Biden did not get angry and promise to punish those responsible for the droning of an innocent Afghan and his family including seven children loading containers of water in their car. He needed a media sorry about revenging the deaths of the 13 American servicemen he got killed, just as he needs a media story about horsemen whipping migrants to distract from the letting in of COVID-infected illegal aliens into American towns and cities.

Joe Biden did not threaten to punish the rogue cop who violated every police manual ever written to murder, yes, murder unarmed Trump supporter Ashlii Babbitt on Jan. 6 at the Capitol. You do not shoot to kill unarmed people whose intentions are unknown and when the imminent danger of physical harm is not present.

Joe Biden’s wrath is reserved for and laser-focused on the U.S. Border Patrol for using horses to control the throngs of Haitian refugees which Joe Biden invited into the country to congregate in squalor under a Del Rio, Texas bridge on this side of our supposedly closed border  Says the presidential horse-whisperer:

President Biden on Friday issued a stern warning to Border Patrol agents seen this week chasing migrants on horseback, vowing, “those people will pay,” amid an ongoing investigation into the images which some Democrats have claimed showed agents whipping migrants.

The president said Border Patrol agents were victimizing migrants: “Horses run them over, people being strapped.” However, critics have pointed out the agents were holding onto reins to control the horses, not whips or straps for migrants.

“Of course I take responsibility,” Biden said. “I’m president, but it was horrible what you saw.”