A hacking group has compromised at least nine global organizations in the fields of technology, defense, energy, and other key sectors as part of an apparent espionage campaign. Attribution is still ongoing, specific tools and methods used in the apparent hacking efforts are in line with those used by the Chinese cyber-espionage group Emissary Panda, also known as TG-3390, APT 27, and Bronze Union.

While China has indeed surpassed the United States in the size of its Navy, the other concern is the build-up of Chinese nuclear weapons.  Meanwhile, the United States has deployed at least 30 U.S.military forces to Taiwan for training. For years, U.S.-Taiwan military exchanges have been thought of as an open secret—also known by the People’s Republic of China (PRC) leadership in Beijing. However, Tsai became the first Taiwanese leader in decades to publicly acknowledge the existence of a training program.

The United States has deployed the Iron Dome missile-defense system for testing in Guam by U.S. military planners concerned about possible Chinese attacks. 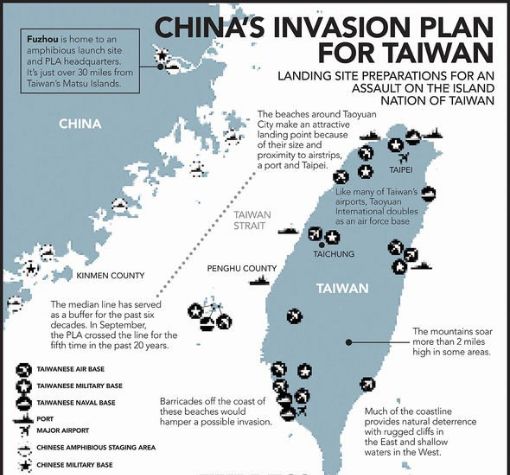 The Chinese military – the People’s Liberation Army – is waging so-called gray-zone warfare against Taiwan. This consists of an almost daily campaign of intimidating military exercises, patrols, and surveillance that falls just short of armed conflict. Since that report, the campaign has intensified, with Beijing stepping up the number of warplanes it is sending into the airspace around Taiwan. China has also used sand dredgers to swarm Taiwan’s outlying islands.