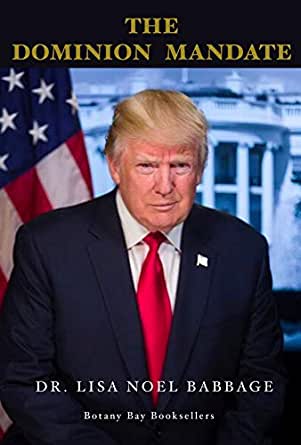 For all of you who have not familiar with Dr. Lisa Noel Babbage, I had the privilege of reading her book “The Dominion Mandate.” It is a fantastic read on former President Donald Trump and the historical ramifications of his time in office and legacy.

A longtime educator and public speaker, Babbage is also a black conservative and a devout woman of faith who is a staunch proponent of the truth. She is anti-abortion, anti-socialist, and is running for office in Georgia for the House of Representatives to represent Georgia’s 7th Congressional District. She declared candidacy as a write-in for the general election scheduled on November 8, 2022.

If you want to delve into Trump’s time in office, this is an excellent book to read. It also covers the duality of religion and politics. It goes into free and fair elections and what happened in the 2020 presidential election concerning fraud and Dominion voting machines. Babbage points out what are perhaps God-inspired changes that took place while Trump was in office.

Here is a summary from the book on Amazon:

Throughout man’s history, ruling families, called dynasties, have exhorted citizens, and more often than not, crushed them. Yet, over these centuries, loyalty to the ruling dynasty has never been questioned. Citizens and subjects alike bow before and honor their monarchs, dictators, and potentates in both fear and reverence. The longest surviving dynasty can be traced back to Japan. Its Imperial Yamato Dynasty, for which the phrase Imperial Japan can be attributed, began sometime around 660 BC. These noble houses are the measuring rod of history; delineating the time in which these families reigned as supreme patrons over nations and peoples.

Unlike the Imperial or any other dynasty, Donald John Trump began a dynasty unto his own: one duly elected, not fashioned nor created out of the influence of any outside force. His legacy, some say, was envisioned only by God.

Others might marvel at the sheer will of the man who transformed the world’s greatest nation, America. Still more may say that the 45th President of the United States encapsulates the epitome of what it means to be American, thereby breaking the mold of what leadership had previously been defined as. Enter the Dominion Mandate.

Here’s a peek at some of the things the book addresses:

“For the two decades prior to the Trump era, America’s manufacturing industry slowly faltered. In 2003, the New York Times reported that American technology jobs were headed offshore.”

“In the last days of the Obama Administration, the Stream Protection Act was passed which limited the scope of domestic coal production. President Trump dissolved this ruling in the first 13 months.”

“In October, just weeks before [the 2020 election], two thousand black conservatives descended upon Washington, again at the support of the President, and in this case, the police.”

Babbage has also written “The Black History Bible” which also deserves a read:

“Over the years, Black History Month has come to be a source of pride for African-Americans from coast to coast. Yet in many communities, the myths surrounding our modern history is being skewed by media propaganda, special interest groups, and those attempting to cast a shadow on the progress we have made in this nation Find out how scripture and history collide in this expose into the Democratic Party in America.”

And while you are at it, she has done an excellent documentary as well called “Systematic Deception,” which was inspired by “The Black History Bible.”

I thoroughly enjoyed reading her book and her clear, concise approach to conservatism, as well as her support for former President Trump. I know you will enjoy it as well and I highly recommend “The Dominion Mandate.”

The left has attempted to divide this nation over race. Babbage is a strong voice urging Americans to turn away from that and to unite in our love of country and God.