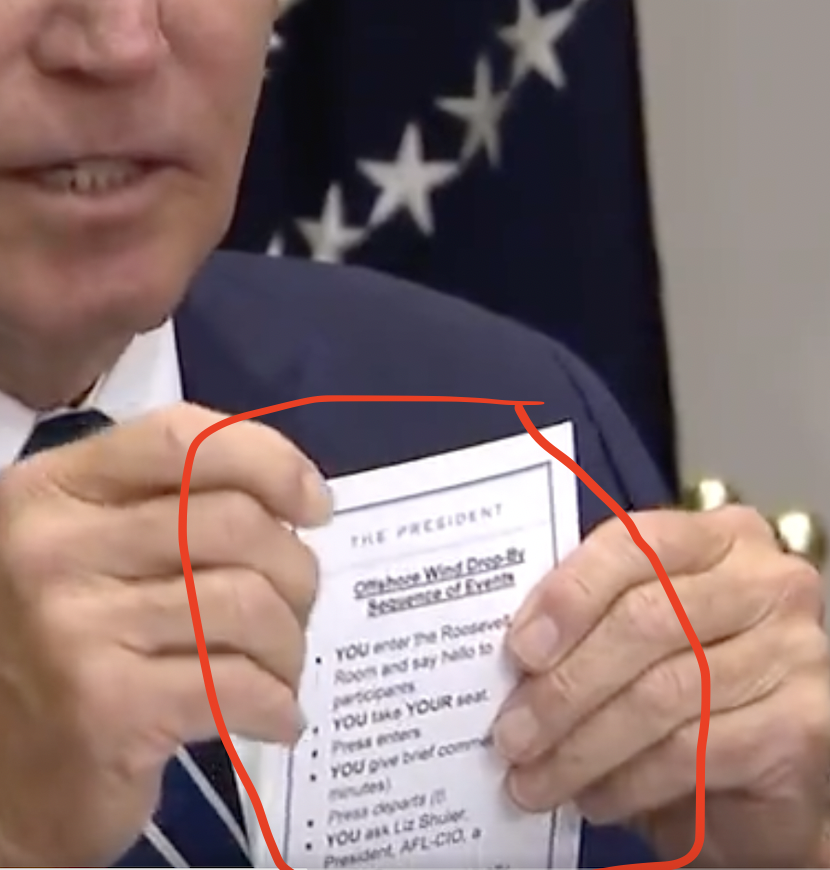 It is yet another historical cover-up by the Left. Frankly, it is terrifying on many fronts. It also proves that Joe Biden is not in charge of… anything.

NOTE the all CAPS… iceberg ahead ladies and gentlemen… 25th Amendment? Re-election… really?

DW: Many politicians are given cheat sheets by their staff to remember talking points and to help them stay on schedule, but observers noticed that President Joe Biden’s notecard on Thursday was filled out with a little more detail than normal.

Kate Hyde, a writer and commentator, flagged that Biden revealed the back of his notecard, showing instructions for how to act and to whom he should ask questions during meeting union and private sector leaders to discuss the new Federal-State Offshore Wind Implementation Partnership.

Biden began the meeting by saying he was “disappointed” by the Supreme Court’s decision released Thursday that upheld the Second Amendment and struck down a New York concealed carry law. As the video shows, one side of the card was written in what appears to be his own handwriting, while the other side had text with step-by-step instructions on what to do while in the room.

Thanks to a Getty Image of the incident, readers can see that the text reads as follows:

In reaction to the photo, Greg Price, a conservative digital strategist, sarcastically remarked, “Joe Biden isn’t senile, guys. His handlers just have to give him step by step directions for every single thing that he does.”

Joe Biden isn't senile, guys. His handlers just have to give him step by step directions for every single thing that he does.

This is not the first time that Biden has been caught using a notecard with verbatim instruction. In late March, Biden was photographed with talking points on what to say about Russian President Vladimir Putin.

“Biden had to have ‘I was not articulating a change in policy’ written verbatim on a notecard so he wouldn’t screw it up… and he still screwed it up,” the GOP’s Jake Schneider tweeted.

Biden had to have “I was not articulating a change in policy” written verbatim on a notecard so he wouldn’t screw it up… and he still screwed it up pic.twitter.com/OvEwlHQVry

Biden has made it a habit to mess up certain talking points, only to have the White House walk back his statements.

During that same press conference where Biden got busted with Putin talking points, the commander-in-chief was asked point-blank about several foreign policy gaffes relating to Russia. While in Europe in late March, the president appeared to tell U.S. troops that they were headed to Ukraine, suggested that the U.S. might retaliate with a chemical weapon if Russia used one first, and alluded to the possibility of regime change in Russia.

Each time, the White House had to issue clarifications after the president’s comments — but when Fox News’ Peter Doocy asked Biden about the clarifications, he appeared to be completely unaware that his team had amended any of those statements, asking Doocy, “What’s getting walked back?”

Doocy asked Biden if he was “worried that other leaders in the world are going to start to doubt that America is ‘back’ if some of these big things that you say on the world stage keep getting walked back?”

“What’s getting walked back?” Biden responded.

The president interjected, denying that had happened at all, “None of the three occurred.”

According to the Baltimore Sun, the purpose of Thursday’s meeting was to launch a “formal partnership with 11 East Coast governors, including Maryland Gov. Larry Hogan, to boost the growing offshore wind industry, a key element of President Joe Biden’s plan for climate change.”