Those dying from fentanyl are not drug addicts, rather they are dying because they think they may be taking regular over-the-counter medication or simply eating candy. They are being poisoned. This White House has proven it does not care but the Drug Enforcement Agency DOES care.

“We can use our space detection capabilities, optical cameras,” Croft told NBC 6. “We can track things within a couple of hours and see things moving.”

That includes being able to see what’s happening in places like Colombia and Venezuela, where intelligence experts fear drug traffickers and terrorist groups will join forces.

Around the clock, space and intelligence experts are sharing what they find.

Inside a room at Southern Command, there is a big screen that shows where the satellites are located. There is also a host of workstations where space experts can explain what they are seeing to representatives from the military and federal agencies.

“Space Command can provide a perspective to be able to identify and find some of these folks, the ways that they communicate, the ways they move,” said Lt. Col. Bobby Schmitt, who is with the U.S. Space Force and is assigned to coordinate what happens in orbit with Croft’s team. “Space Command provides the ability to see down and find these folks.” More here.

END_OF_DOCUMENT_TOKEN_TO_BE_REPLACED

What will skyrocketing energy prices mean for U.S. consumers this winter? Seniors, the poor, those living paycheck to paycheck will suffer most. But all will suffer.

The effect of these increases — the lack of trickle-down economics — seems pretty obvious. Unless someone powerful gets this administration to sweep the deck of climate radicals, people will needlessly die. All will suffer.

When gas prices skyrocketed earlier this year, the administration began draining the Strategic Petroleum Reserve to historically (and dangerously) low levels. This has temporarily kept prices in check, but only because of the midterm elections. After the midterms, if the radicalized EPA isn’t reined in, we should prepare for $8 gas, minimum. If Democrats retain power, we are in for a succession of long, dark winters. 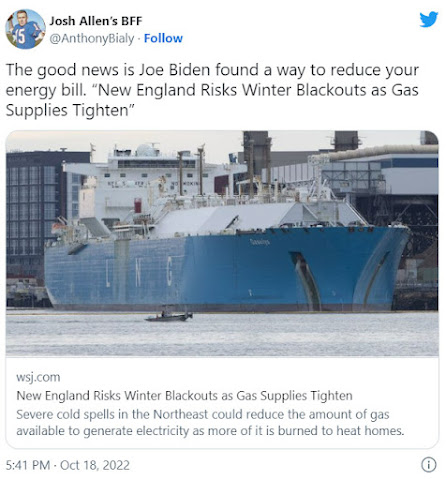 If left unchecked, this “progressive” administration will touch off — needlessly — a second Great Depression.

"Biden administration has leased fewer acres for oil-and-gas drilling offshore and on federal land than any other administration in its early stages dating back to the end of World War II"https://t.co/Nkj4JzL5b9 pic.twitter.com/44XYBS3MB6

Biden and his allies have been blocking oil refinery capacity for decades, as I document here, and then gas-lighting the public about ithttps://t.co/HdRkDA7uD4

“If you were an oil company, why would you invest hundreds of millions of dollars into expanding refining capacity if you thought the federal government or investors would shut you down in the next few years? The narrative coming from the administration is absolutely insane.” pic.twitter.com/qfziNhvcrU

Those are facts. Draw your own conclusions: https://t.co/ygwOZqPIBk

BRUTAL: Bloomberg’s Jonathan Ferro cornered Brian Deese on national television, refusing to let him talk his way out of answering if the Biden Admin asked OPEC+ to delay cutting output to help Democrats in the midterms: pic.twitter.com/qPSzDQDKMT