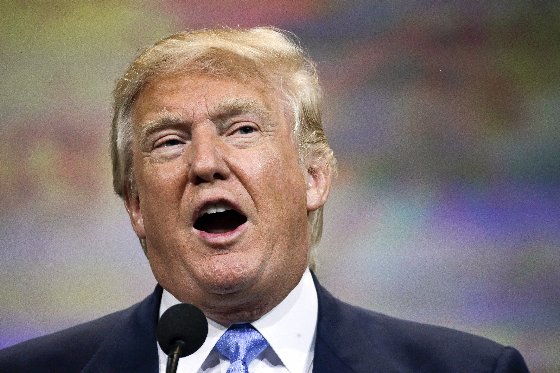 While showing an image of Donald Trump as a wrecking ball, veteran leftist operative Webster Tarpley told the recent Left Forum in New York City, “If we play this right, he can destroy the Republican Party.” The comments, delivered at the major left-wing gathering of the year, reflect the belief among “progressive” activists that the Donald J. Trump candidacy can be used to destroy the Republican Party and usher in a major period of Democratic Party rule, under the increasing influence of an openly socialist faction.

“This party must be destroyed,” Tarpley said, referring to the Republicans.

Tarpley’s analysis of the political scene takes on additional significance as we see evidence of communists and Mexican nationals protesting outside Trump rallies and assaulting Trump supporters. Tarpley’s audience was the Left Forum, which is described as “the largest annual conference of a broad spectrum of left and progressive intellectuals, activists, academics, organizations and the interested public.” The theme for this year’s event was “Rage, Rebellion, Revolution: Organizing Our Power.”

Those participating included the Democratic Socialists of America (which supported Barack Obama and now Bernie Sanders), the Southern Poverty Law Center, representatives of the governments of Cuba and Venezuela, the “Exonerate Ethel Rosenberg” campaign, CodePink, the Palestine Solidarity Committee, the Workers World Party, the Trans Queer Liberation Movement, and the Greek Communist Party.

A former operative in the movement led by Lyndon H. LaRouche, an aging Marxist ideologue who served time in prison on fraud charges, Tarpley is viewed by the left as an expert on the class struggle that defines the evolution of the American political system. He has been a prominent figure in the so-called 9/11 Truth Movement, which blames unnamed U.S. officials for carrying out the terrorist attacks on September 11, 2001. He is today associated with the Tax Wall Street Party, a group backing the Sanders proposal to raise taxes on financial transactions in order to finance a socialist super state.

Drawing on historical sources and stories about turmoil in the Trump campaign and the GOP, Tarpley predicted that Trump’s candidacy will divide the Republicans and result in one of its factions merely surviving as a regional party based in the Deep South, rural areas, and the intermountain West. However, he said the party itself has become so dependent on “aging white men,” a shrinking percentage of the electorate, that it may be “demographically doomed” in the long term.

Tarpley, who thinks Sanders has not gone far enough to the left, believes opposing Trump and calling him a fascist is a smart organizing tactic by the left. In his talk, “Destroy the GOP—Split the Dems,” Tarpley describes the Sanders campaign and associated groups as “New Deal Democrats,” as opposed to the “Wall Street Democrats” backing Hillary Clinton. Eventually, if everything goes according to plan, the Sanders wing of the Democratic Party will take control in a “progressive realignment,” and a “new progressive coalition” could emerge and dominate American politics for decades.

“Trump is the trigger” for this dramatic series of developments, he told the leftist conference, and it means the Republican Party could go “extinct,” since it is perceived as being hostile to the new immigrants who have flooded into the country. He is predicting a complete political realignment for the period 2016 to 2046.

However, left unsaid in his presentation is whether after Mrs. Clinton is presumably done with her first term as president, she could be challenged for another term by the Sanders wing of the party, possibly represented at that time by Senator Elizabeth Warren (D-MA).

But the idea that Warren is somehow against the interests of Wall Street and finance capital is, of course, complete nonsense. She ran for the Senate with the support of hedge fund billionaire George Soros and other big money liberals.

While Tarpley is not a supporter of Mrs. Clinton or President Obama, he gives Obama, a skilled Marxist-trained operative, enormous credit for assembling a winning coalition in the presidential campaigns of 2008 and 2012. He explained, “2008 was a watershed election, and in retrospect that will become more obvious than it is now.” He said Obama had ushered in “a new phase” of politics that has put tremendous pressure on the Republican Party to generate support from enough of the electorate to survive as a national political entity.

“That future is what you have to keep your eyes on,” he emphasized. “That’s where you have to get. It means a crushing defeat for Trump, if we can do it.”

At the same time, Tarpley acknowledged that Trump supporters have “legitimate economic beefs,” based on the declining standard of living, and the fact that “deindustrialization” has harmed the middle class by destroying millions of factory jobs. But the Republican ideology is “in crisis,” as factions of the party disagree over the benefits of free trade and solutions to other economic problems. Other major Republican donors have libertarian tendencies that threaten the GOP coalition as well, he stated.

While the demise of the Republican Party may seem like wishful thinking, Tarpley outlined a political scenario that is plausible to outside experts and which could mean that the GOP would meet the fate of other political parties in American history—such as the Federalists, Whigs, and Know-Nothings — “by breaking apart” and losing the presidency, the Congress, and the Supreme Court in the process.

Tarpley’s predictions about Trump’s negative impact on the Republican Party came just a few weeks before Trump unleashed a series of attacks on a “Mexican” judge, who was actually born in the United States, prompting more concern from current and former Republican officials that the Trump presidential campaign could jeopardize Republicans prospects in November.

The destruction of the GOP also means the defeat of what Tarpley called the “neocon warmongers,” defined as those who favor U.S. military intervention against radical regimes and terrorist groups in the Middle East.

Continuing the pro-Russian bent that has long characterized the LaRouche movement, Tarpley favors the destruction of NATO. He was a speaker at the “No to War, No to NATO,” conference in Rome, Italy, which also included a representative of the old Soviet front, the U.S. Peace Council. Tarpley then participated in a forum on “good relations with the Russian Federation” held in St. Petersburg, Russia.

While Trump has been critical of U.S. military intervention in the Middle East and has questioned the need for NATO, a one-time anti-Soviet alliance, these positions were not of any interest or concern to Tarpley. Instead, Trump was viewed as an opportunity to divide and weaken the Republican Party.

With the Republican Party out of the way, the activists making up the Left Forum would be able to consolidate their power in the Democratic Party and move it even further to the left, in terms of more socialism at home and more accommodation of “anti-imperialist” and “anti-capitalist” forces abroad.