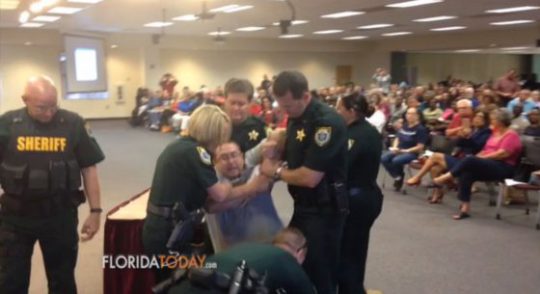 Many of us have seen a video of the man, albeit a candidate for the Brevard School Board, use the words “erect penis” in a Brevard school board meeting about LGBT issues and what is occurring inside the Brevard County School System. Considering the subject matter, it would seem that an appropriate medical term would be the least of issues causing a disturbance, … that is unless they have reason to be ultra-sensitive and defensive.

The media has since, in many cases, made Dean Paterakis seem “inappropriate” and categorically overlooked the actual issues he was bringing to the surface and the shock value of his language, (which should be protected by free speech), has indeed now drawn attention to the systemic issues afflicting the Brevard Public School system. Public support seems to exist, as well, as it was seen and emphasized by the chant of the crowd telling the school board to, “let him speak”. Mr. Paterakis seems to have hit the nail on the head, to the displeasure of the school board, and his viral arrest video has begun to now unravel and expose the systemic issues plaguing the Brevard Public School system, which are numerous and appalling.

In the past year, teacher morale in Brevard has dropped to a dark low. A FLORIDA TODAY article published August 10th, 2015, for example, is titled, Brevard teachers leave in droves for other jobs. Teachers cited low morale as their main concern about teaching there. It goes on to state that four pages worth of resignations, consisting of 73 teacher resignations and 80 retirements, was on just one school board agenda. 368 other teachers voluntarily resigned that year and 365 resigned or retired in the 2014-2015 school year at the time of the article. Furthermore, the article exposes that 1,196 teachers have resigned over the past six years and 839 more retired. That is approximately 42% of the entire Brevard Public School system teacher population total number that has turned over in the past six years. What is even more appalling is what is occurring within the school system. Prepare yourself.