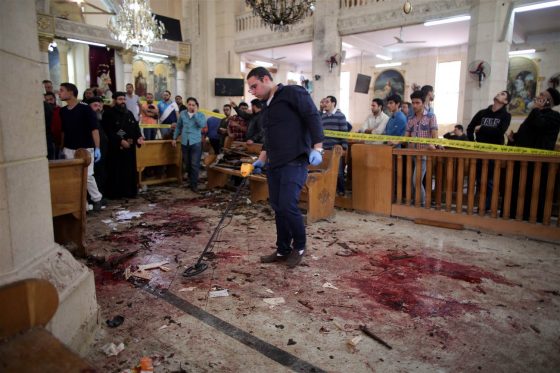 Egypt’s Coptic Christians suffered another fatal attack on its churches during this morning’s (April 9) Palm Sunday celebrations. Many parishioners were killed and maimed in a dual-church attack during the Palm Sunday services.

North of Cairo, a terrorist bomb struck the Church of Saint George in Tanta claiming the lives of more than 40 worshippers and injuring at least 65 attendees.

Simultaneously, the Morkussia Church of Alexandria was bombed leaving at least 15 persons dead and many more injured. After leading the celebration mass, Coptic Pope Tawadros II left the Morkussia Church minutes before the planted bomb exploded. Aside from the casualties from the Coptic population, four police officers were killed.

Immediately upon the tragic moments of this dual attack, Al Azhar Institute — the center for Sunni Muslim scholarship and the core of Egypt’s deep state — announced that such actions represented strange, abnormal behavior from Islam given its peaceful doctrine. President Al-Sisi followed with his routine phone call to the Coptic Pope to offer solidarity and an investigation.

The Egyptian news reported that during this event the government dismissed the Western Province police director from his duties. It is speculated that the director was known as a terror sympathizer or even complicit in this occurrence. However, no one knows for certain the motivation behind his firing, which followed on the heels of a brutal beating by Coptic youths outside the church when the director appeared after the bombing to investigate.

The Coptic Orthodox Church seems to have joined the rhetoric of the deep state and the Al-Sisi administration using a deception that has facilitated and sustained a long string of terrorist attacks targeting Coptic Christians in recent months and years since A-Sisi came to office.

Reflecting this is a recent statement made by Coptic Bishop Emanuel a few days ago saying, “The Coptic situation improved after the June 30 uprising,” (referring to Morsi’s removal from leadership in 2013). He added, “Copts are getting their full rights and now everyone lives in peace, and such improvement is due to a government and president who care for everyone without distinction.” Even a cursory understanding of Egyptian events reveals the delusional nature of his statements or even worse, his intent to deceive.

Voice of the Copts offers its deepest condolences to the families and sincere hope and prayers for the full and speedy recovery of all injured parties.