By: Genevieve Wood
The Daily Signal

Sen. Ted Cruz, R-Tex., sat down for an exclusive interview with The Daily Signal to talk about what he describes as the “Age of Cronyism” in Washington. From the backroom deals beings made to push through President Obama’s trade agenda to the fight over the Export-Import Bank, sugar subsidies and the ongoing battle to repeal Obamacare, Cruz says it’s time to expose who really benefits when big government and special interests get together. You can see his answers to specific questions by referring to the time codes below:

00:17 Who is he referring to when he talks about the Washington cartel?

3:03 Why did he change his position on supporting Trade Promotion Authority?

4:12 What does he make of Republican leaders coming down hard on conservative members in their party, removing them from leadership posts simply because they don’t vote in lock step with GOP leadership?

5:41 What does he believe Republicans in Congress should do if the Supreme Court rules in King vs. Burwell that the Affordable Care Act does not allow Americans to receive health care subsidies through the federal exchange? What happens to the millions of people currently receiving such subsidies?

The only obstacles in his path are conservatives and Jeb Bush’s progressive agenda. 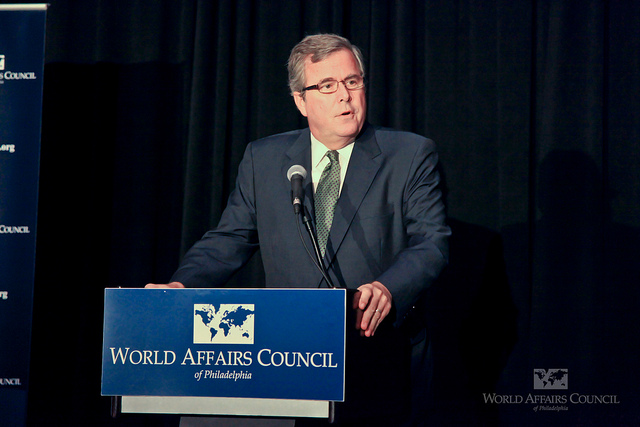 Although he’s still dancing around it and acting coy, Jeb Bush has already decided to run for the GOP Presidential nomination next year. A sure sign of this is a puffed up portrait of his term as Governor of Florida planned for release next Spring. It won’t be a hardcover, but an ebook – which indicates that since no one but hard core Bush-bots are likely to read or purchase it, the ebook will be used as a marketing piece, or what others including myself, would term campaign propaganda.

The reason Bush is sitting tight until next year to announce, is the same reason presidential candidates on both sides of the dual party aisle are holding back; he doesn’t want to make himself a target this soon. It doesn’t matter. He’ll be a target (not a literal one), before, during and after his official announcement.

It’s hard to discern what broad appeal Jeb Bush will have to anyone who is not an admirer of the Bush family political dynasty, the endless wars they’ve presided over, the imperialist behavior of their presidencies, or the violence they’ve inflicted on the Constitution. He certainly is not a conservative.

It’s not as though Jeb did anything more than pay lip service to reductions in government spending. In fact, Florida’s budget expanded by 27 percent during his terms in office. And if you liked the federal bailouts of the Banksters on Wall Street in 2008, you’ll surely be impressed with Jeb Bush’s personal financial dealings, one of which is outlined by Gary W. Potter, PhD. Professor, Criminal Justice at Eastern Kentucky University:

Jeb Bush had a role in yet another Savings and Loan fiasco when he defaulted on a loan from Broward Federal Savings and Loan. Broward Federal loaned $4,565,000 to J Edward Houston, a real developer in February, 1985. The loan was secured only by Houston’s personal guarantee. On the same day, one of Houston’s company lent the same amount to a partnership made up of Jeb Bush and Armondo Condina for the purpose of purchasing a building in Miami.

The Bush-Condina partnership was required to repay the loan only if revenues from the building were sufficient to cover the repayment. Bush and Condina made no payments on the loan at all and in 1987 Houston defaulted on the loan and the Bank sued both Houston and Bush-Condina. In a sweetheart settlement with the Federal Deposit Insurance Corporation, Bush and Condina only had to repay $500,000 of the $4.5 million loan and got to retain ownership of the building which had been the collateral on the loan.

In 1991, the FDIC sued the officers and directors of Broward Federal charging that the loan ultimately used by Bush and Condina was an example of the bank’s negligent lending practices. The Bush-Condina loan played a key part in the failure of Broward Federal which cost taxpayers $285 million.

Needless to say, Jeb had no problem with defining the 2008-2009 Fed bailouts as being necessary.

Jeb Bush has proven to be all over the map with just about every matter of public policy. For starters, he was against gay marriage, before he was for it. He was opposed to corporate welfare until he saw the opportunity and campaign donations that come with supporting it.

He touts a goal of 25% renewable energy by 2025 (a complete absurdity), but claims to champion a free market approach to national energy policy. Jeb Bush contradicts himself on the question of immigration reform. He opined in the Wall Street Journal in January 2013:

“A practicable system of work-based immigration for both high-skilled and low-skilled immigrants — a system that will include a path to citizenship — will help us meet workforce needs, prevent exportation of jobs to foreign countries and protect against the exploitation of workers.”

But a few months later in March, he said:

“I think there has to be some difference between people who come here legally and illegally. It’s just a matter of common sense and a matter of the rule of law. If we’re not going to apply the law fairly and consistently, then we’re going to have another wave of illegal immigrants coming into the country.”

Bush is another in the warfare state Amen chorus of Sen. John McCain (R-AZ)49% and Rep. Peter King (R-NY)35% – men who see the military as a hammer and every potentially adverse situation internationally as a nail. Jeb Bush, who never so much as donned a military uniform, unhesitatingly proposes that the United States risk a hot war with Russia by aggressively rattling sabers in their backyard.

He was also supportive of the idea of invading Syria to overthrow Assad’s government, thus paving the way for ISIS to establish Damascus as the capitol of their desired world Caliphate.

Michael Brendan Dougherty in The Week, sums up a position that Jeb Bush fiercely defends and that puts him at odds with a large swath of GOP voters:

The George H.W. Bush style of domestic policy that both his sons inherited is one of giving liberal programs half the funding and authority liberals want, but dolloping on so much conservative-branded “accountability” that it can be sold to the right. Poppy pushed “standards-based reform.” W. did No Child Left Behind. And Jeb is the leading GOP advocate for what’s become of Common Core. Whatever the merits, being identified so closely with a Bill-Gates subsidized education scheme hated from the right wing to Louis C.K. will prove costly.

Jeb Bush is in sync with the oligarch investment class, but finds the conservative base of the GOP incomprehensible. Jamelle Bouie writing in Slate explains why:

Since leaving office, Bush has lived in the realm of corporate philanthropy, where wealthy executives give huge sums for a variety of unconservative causes, like climate change and Common Core. It’s a world of vocal centrism, where Michael Bloomberg is esteemed and the fights are for gun control and calorie labeling, not traditional values and the repeal of Obamacare.

In fact, Bush has participated as a board member on corporations such as Tenet Healthcare and Inno-Vida, both of which have been beneficiaries of the crony capitalism aspect of Obamacare. Jeb believes Obamacare is lucrative, which explains his attacks on conservatives like Sen. Ted Cruz (R-TX)95% who are focused on unraveling it legislatively.

Cementing this is his recent comment dismissing efforts to repeal Obamacare, “We don’t have to make a point any more as Republicans. We have to actually show that we can, in an adult-like way, we can govern, lead.”

At the end of the day though – what should be the Silver bullet against any realistic chance Bush has at claiming the nomination – is his insistence on promoting amnesty, despite the clear evidence that the election we just had in November was a repudiation of ‘immigration reform’.

Bush touts Hispanic ‘Family Values’ as being essentially superior to those of Americans. Remember the “Yes, they broke the law, but it’s not a felony. It’s an act of love”, quote? Jeb is not relenting:

“If we are going to be young and dynamic and aspirational, we have to control the border. Most people that come to this country come for their families, plain and simple. So, they break the law, there should be penalty — they pay a fine, they should get back of the line, they should learn English, they shouldn’t get government subsidies. They should work. All those things are the price to pay for coming illegally.”

At the same time, Bush warned not to “ascribe evil motives for people wanting to put food on the table for their families.”

Of no interest to Bush are the millions of Americans that have been displaced in the job market by this invasion of locusts. And as I have pointed out in considerable detail, Bush has to know he’s lying about the conditions he outlines for the path to citizenship.

No illegal will ever pay any fine, be denied any government subsidies, get in the back of any line, be required to learn English or pay any back taxes. This is all complete fiction. Best summing up why a Jeb Bush candidacy should be a non-starter are Bush’s own words:

“If you run with big ideas and then you’re true to those ideas, and get a chance to serve and implement them and do it with passion and conviction, you can move the needle. … And that’s what we need right now in America. I have no clue if I’d be a good candidate, I hope I would be. I think I could serve well as president, to be honest with you. But I don’t know that either. I think you learn these things as you go along. I know a Republican can win, whether it’s me or somebody else.”