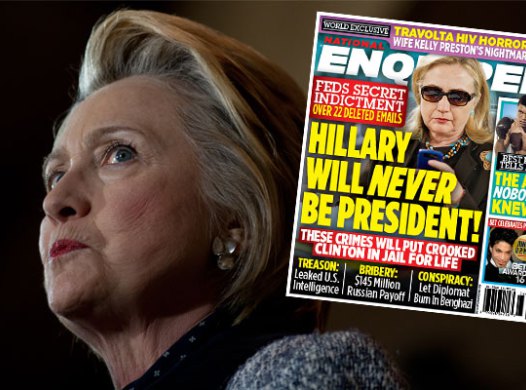 The supermarket tabloid National Enquirer can’t be laughed at any more. It was Donald J. Trump’s effective weapon against Senator Ted Cruz (R-TX) and now it’s been unleashed against Hillary Clinton. The issue currently on newsstands reveals “The Explosive 7-Step Plan to Destroy Hillary,” and predicts the demise of the Democratic candidate.

Don’t laugh. In 2007, the National Enquirer broke the story of Democratic presidential candidate John Edwards’ “love child.” Edwards was caught visiting his mistress and secret love child in a Los Angeles hotel. Edwards denied the affair, but the truth came out. The National Enquirer was vindicated.

The New York Times reported, “By being the first and, largely, the only publication pursuing the Edwards story through his denials of the affair and of fathering a child out of wedlock, The Enquirer is under consideration for a Pulitzer Prize, and it has strong support for its bid from other journalists.” The Enquirer’s staff became eligible for the Pulitzer in two categories, “Investigative Reporting” and “National News Reporting.” It fell short, however.

The National Enquirer became Trump’s favorite media weapon to smear Cruz. Here is a list of assaults on the rival Republican from the tabloid:

The attacks on Cruz, especially the attack on his father, Rafael Cruz, took their toll. The Texas senator cited Trump’s use of the smear in explaining why he wouldn’t endorse the New York billionaire for president. “I am not in the habit of supporting people who attack my wife and attack my father,” Cruz said. Trump had tweeted a bad photo of Cruz’s wife Heidi next to a flattering picture of Trump’s supermodel wife.

On “Fox & Friends,” Trump had cited the Enquirer story about Cruz’s father as believable. Trump said, “Nobody even brings it up. They don’t even talk about that. That was reported, and nobody talks about it.”

By the time the patriotic July 4 issue of the National Enquirer had appeared, Trump had won and the publication ran the story, “Trump: How I will Save America From Terror.”

The publication had really moved on from attacking Cruz to going after Hillary by the June 27 issue, with the story, “Hillary Will Never Be President,” citing an alleged indictment of the candidate over her use of emails. It didn’t pan out. The FBI director didn’t recommend an indictment.

But the August 1 story, “How Trump Will Win,” explains how lesbianism and lies will eventually cause the campaign collapse of the former secretary of state. Among the revelations:

Don’t think the National Enquirer doesn’t have high-level sources. The former Clinton aide Dick Morris, who once worked for Fox News, now has a regular column in the publication, under the headline, “The most feared voice in politics.” His most recent column, concerning the former secretary of state’s dealings with Russia and Vladimir Putin, is actually quite good. He notes that the emails released by Mrs. Clinton conveniently omit details about a deal Russia made to buy American uranium. The deal came after Bill Clinton was paid hundreds of thousands of dollars by a Russian firm for speeches.

Morris did have a column in The Hill newspaper, which is distributed in Washington, D.C. But that paper dropped him when he signed on with The National Enquirer. Enquirer Editor-in-Chief Dylan Howard said his hiring was proof of the publication’s “commitment to investigative journalism.”

Morris told the New York Post, “I enjoyed writing for The Hill for 20 years and I had a wonderful relationship with them, but the Enquirer’s circulation is many times The Hill’s. I think this move makes sense.”

Ironically, as The New York Times pointed out, The Star, the sister publication of The National Enquirer, revealed Morris’s affair with a prostitute who claimed he had a penchant for sucking her toes. “The National Enquirer followed that bombshell with news of another mistress and a love child in Texas,” it said.

At the time, the paper reported that Morris had responded, “I will not subject my wife, family or friends to the sadistic vitriol of yellow journalism. I will not dignify such journalism with a reply or an answer. I never will.”

He later admitted the stories were true, the Times said.

His personal life aside, Morris is the author or co-author of some 20 books, including Condi vs. Hillary: The Next Great Presidential Race, about a match-up that did not occur in 2008.

In 2012, Morris, then a Fox News commentator, had predicted a Mitt Romney win. Morris’s prediction was Romney winning with 325 electoral votes, versus Obama’s 213. “That’s right,” Morris said. “A landslide for Romney approaching the magnitude of Obama’s against McCain.” Obama beat McCain 53-46 percent.

But Morris was not alone. Karl Rove, Fred Barnes, and Michael Barone had alsopredicted a Romney win.

This time, Morris has another book, Armageddon: How Trump Can Beat Hillary, described by Newsmax as “powerful and timely.”

But on the Dick Morris website, one person responded to the new book with the comment, “How Trump can beat Hillary? Well, the same way Romney and McCain beat Obama, I guess. Dick, you keep singing the same song over and over again.”

The trouble with the current anti-Clinton strategy, “The Explosive 7-Step Plan to Destroy Hillary,” is that people probably won’t believe it when they see it, since the information will be coming from a source that even Cruz has denounced.

However, in contrast to how the major media picked up the tabloid’s charges against Cruz, it’s doubtful that any controversial charges against Clinton, even with substantial evidence to back them up, would get the same kind of sympathetic coverage or traction.

In any case, Trump clearly has a journalistic weapon to use against Hillary. It would help, in his war against the Democrat, if he has what the tabloid had when it exposed John Edwards — eyewitnesses, photos and evidence.