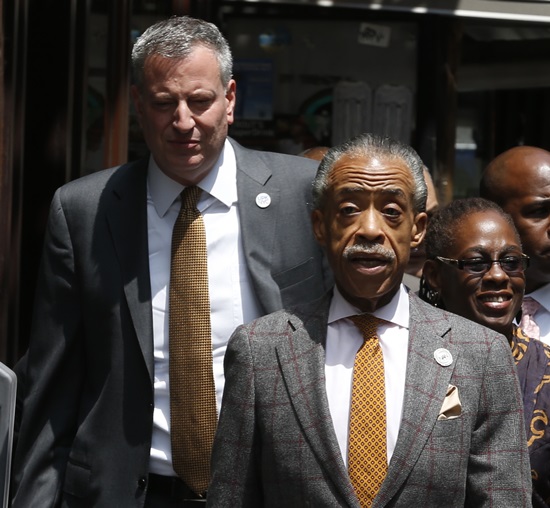 Ex-NYPD Commissioner Kerik is right… De Blasio and Sharpton Have ‘Blood on Their Hands.’ They brought this on and they share responsibility for the deaths of these two officers. Last Saturday, two NYPD officers were assaulted by seven protesters who punched and kicked them. Now this. What did the race baiters expect? They begged for this to happen – they incited riots and violence and now two good men are dead. They were working overtime as part of an anti-terrorism drill in Bedford-Stuyvesant. Very dark irony at play.

Ismaaiyl Brinsley, a gang banger, nonchalantly walked up to the patrol car, pulled a gun and shot the officers. His Instagram page bragged about committing this atrocity 48 hours before he did the deed. First he shot his girlfriend in Baltimore… then he drove to New York and murdered two officers and then committed suicide in a subway station. This was an execution plain and simple and Brinsley said he did it in revenge for Eric Garner and Michael Brown. Both killed by cops in the line of duty and both grand juries found the officers innocent. But because of ginned up racial unrest by the likes of Al Sharpton and Mayor De Blasio, thugs are taking their own form of justice in the streets. Well done, you grandstanding, evil idiots.

De Blasio is on the air as I write this. I can’t stomach watching the hypocrite. Officers Wenjian Liu and Rafael Ramos will miss Christmas with their grieving families this year. Meanwhile, De Blasio poses for the cameras and tries to look sad. I call bull crap. He threw all of the NYPD under the bus over the Garner incident. They weren’t innocent till proven guilty – they were ruled innocent and declared guilty by their own Marxist Mayor.

Brinsley only committed suicide when he was cornered by cops. But I don’t believe he thought he would be going home. He knew it was a one-way assassination and therefore shot his girlfriend. That’s what malignant narcissists do. He wrote on Instagram creepy one liners such as “I’m Putting Wings on Pigs Today,” “I’m putting pigs in blankets,” “They Take 1 Of Ours…Let’s Take 2 of Theirs” and then “This May Be My Final Post.” He also used the hashtag #ShootThePolice. 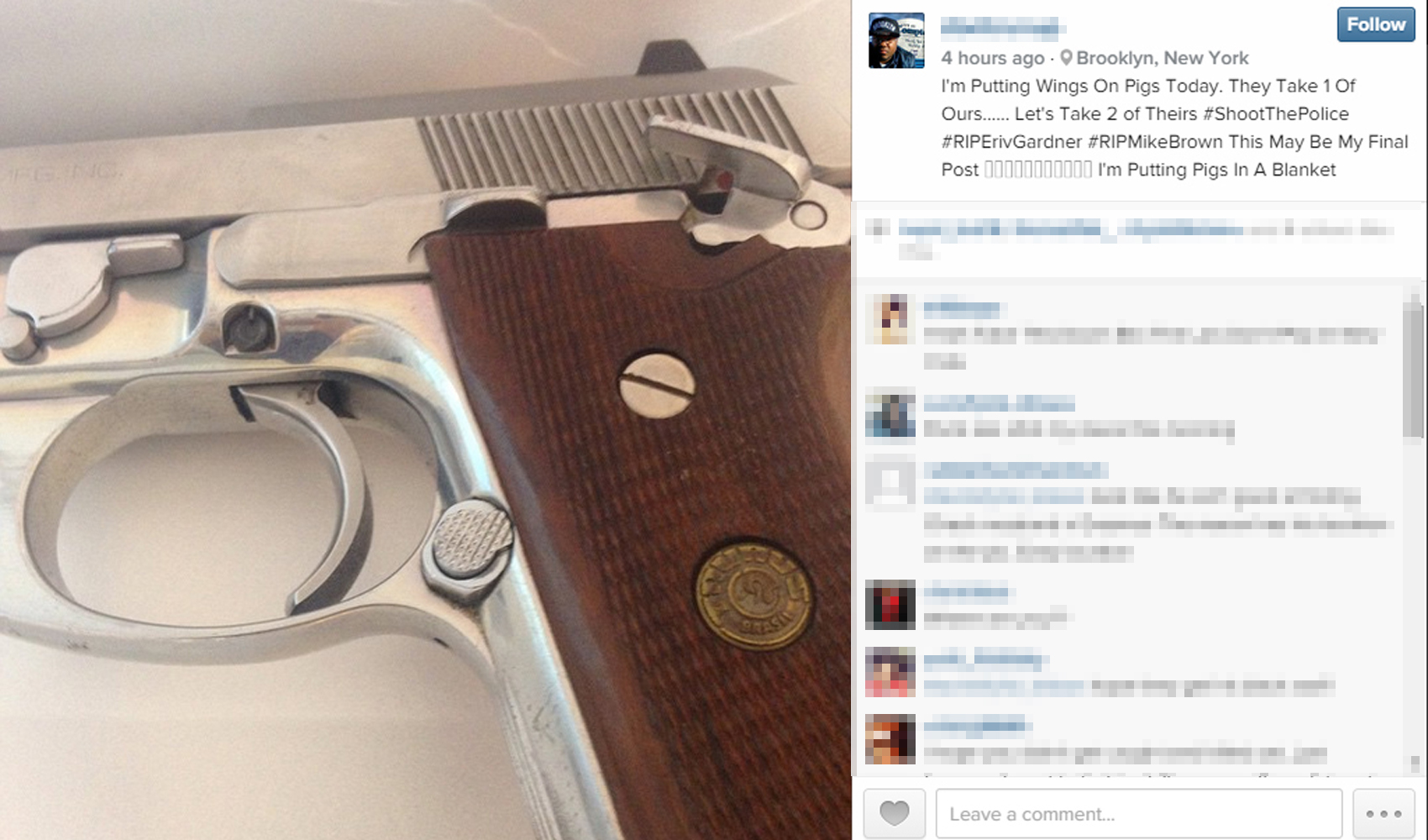 The officers were pronounced dead at Woodhull Hospital. Their families, friends and fellow officers gathered, wept and grieved. Guess who was not welcome? City Council President Melissa Mark-Viverito and Mayor Bill De Blasio. Yeah, De Blasio is also persona non-grata at all police funerals. They don’t want the two-faced communist defiling any warrior’s send off. Can’t blame them in the least.

“We’re all in this together,” the mayor told grieving cops, according to a cop who was there.

“No we’re not,” one officer said tersely in response.

Just last week cops began signing a “Don’t Insult My Sacrifice” waiver, distributed by the Patrolmen’s Benevolent Association, that warned the mayor and speaker to stay away from funerals of cops killed in the line of duty.

Lieutenants Benevolent Association President Lou Turco, like many cops, likened the murders to the 1988 assassination of Police Officer Eddie Byrne.

The 22-year-old rookie cop was alone in a squad car in Jamaica, Queens, guarding the home of a witness in a drug case, when he was shot in the head five times. The hit was ordered by jailed drug kingpin “Pappy” Mason, in retaliation for his arrest.

“I don’t even know how to respond to this,” Turco said. “Twenty-eight years on and I don’t know what to say.”

Another cop, who is black, said he fears that “this is just the beginning.

Both shooting locations — above and below ground — were scenes of blood and terror.

“There are people out there who will want to be copycats. The tension out there is the worst I’ve ever seen it.”

This demon shot those cops in the face… the face. There was blood everywhere and their faces were ruined. This is what De Blasio has wrought and it probably is just the beginning.

Brinsley had a criminal record dating back to at least 2006, when he was arrested in Georgia for carrying a concealed weapon and a knife. He was also convicted of shoplifting. The next year he was arrested in Dekalb County, GA, for criminal trespass and by 2009, he was indicted in Ohio for robbery — a charge that was later apparently dismissed. In 2011, he was arrested again in Georgia for reckless conduct, tampering with evidence, criminal property damage and discharging his weapon. And let’s not forget he was a gang banger. The Islamic moniker is interesting as well. Turns out he was a Muslim – terrorism anyone? 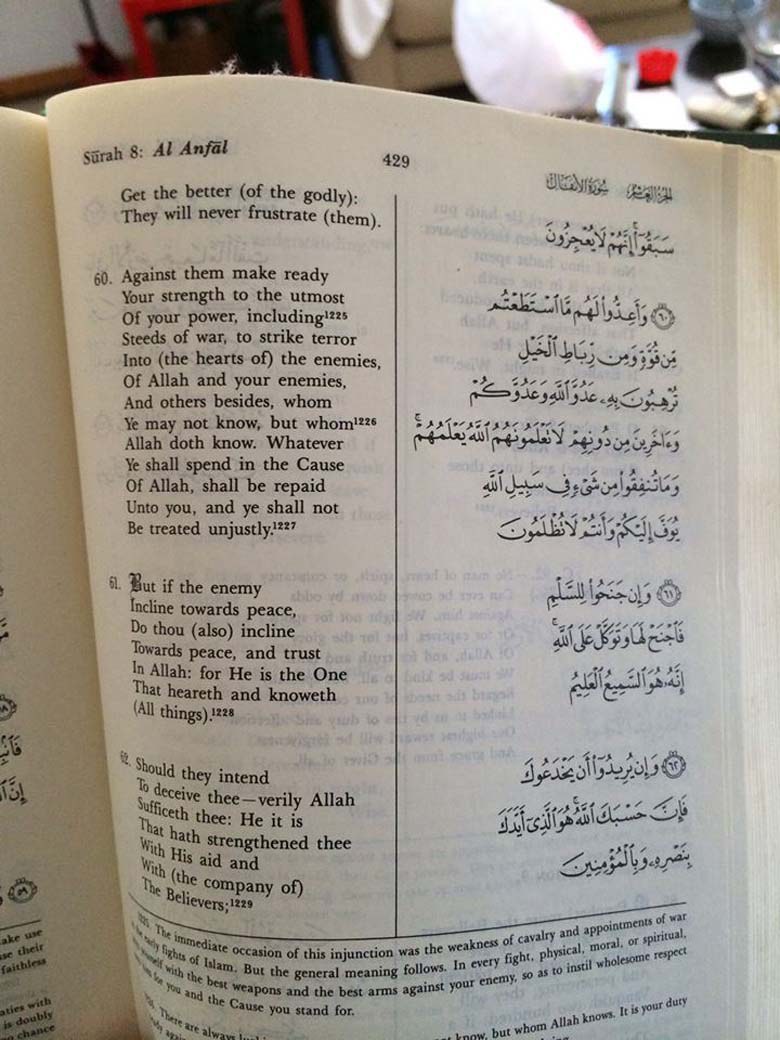 From Bare Naked Islam (his bio on Facebook is no longer there):

According to his Facebook page, Brinsley speaks Arabic. His favorite quotation on his page is: The Foot You Step On Today Could Be Connected To The The Ass You May Have To Kiss Tomorrow. On his Facebook page he went by the moniker “Bleau Barracuda.” According to an arrest sheet for Brinsley from 2007 in Georgia, his middle name is Abdullah. In that incident, Brinsley was accused of criminal trespass.

Kerik told Newsmax that the officers’ deaths resulted from a climate created by De Blasio, Sharpton and other New York City officials.

“This guy’s intent — based on that Instagram post — was retribution for Eric Garner and Michael Brown,” he told Newsmax. “The people who encouraged these protests — you had peaceful protesters who were screaming ‘kill the cops’ — the so-called peaceful protesters.

“They encouraged it — and these two cops are dead because of people like them,” Kerik said. “They don’t owe the cops an apology.

“An apology isn’t good enough. They have blood on their hands.”

Damned straight… no apology will ever be enough. It will never bring them back. Is this what you had in mind New York, when you elected a Marxist as your Mayor? It’s certainly what you got.

Now there are evil people celebrating the death of these two brave cops in the streets. They are disgusting. These murderous radicals couldn’t contain themselves… 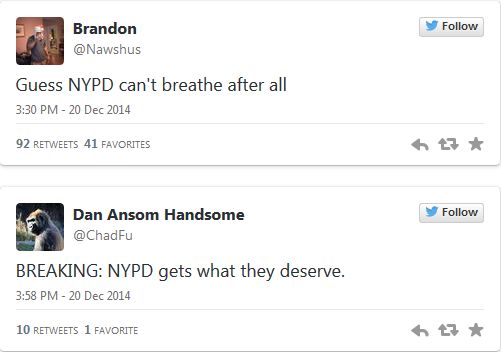 Garner did not die from a chokehold. First off, it was a headlock. Second, he died of cardiac arrest in the ambulance after being arrested. Arrested for selling illegal merchandise and resisting arrest. Sorry, no sympathy here. Brown robbed a store, charged a cop like a drugged up bull, tried to wrest the cop’s gun from him and beat on the cop before he was shot. Once again, no sympathy whatsoever here. So, these radicals believe that justice lies with those who break the law, not with those who are sworn to uphold the law and protect us? This is not a racial thing – it is to overturn our rule of law. 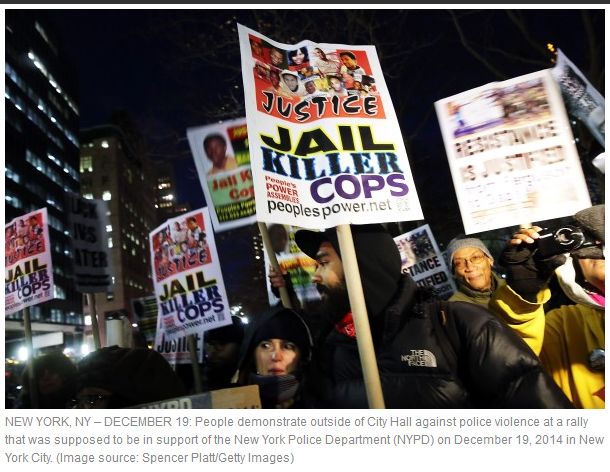 All the die-ins across the nation were just a warm up act for the real thing. And it will be on both sides if this keeps up. Two good guys died today. I grieve with their families and their fellow officers. I grieve even more for a nation sinking into a contrived abyss of radical upheaval. Change has come to America.

The introduction of the euro brought the citizens of Europe many advantages, including uniformity. It would be nice if that uniformity also applied to the comparison of the various stock exchanges. An index point is not a fixed unit in time and does not have any historical significance, so the European citizen may therefore not attach any significance for the future. Comparing index points to their history and also comparing the various stock exchanges makes no sense. The time is ripe to reindex European stock exchanges to 100 points.

Reindexing to 100 points has many advantages

For each stock market index, a so-called DIVISOR100-value is introduced.

Table: Overview of values ​​for DIVISOR100 for the various stock exchanges

For the citizens of Europe the stock markets are much more transparent with this reindexing.

The closing position of the market prices at June 30, 2014 without reindexing:

The closing position of the market prices at June 30, 2014 after reindexing:

In order for the citizens of Europe to get used to the idea of ​​re-indexing of the exchanges, the old index values can still be published alongside the new index values ​​during a transition period​​. In due course they will only have a view for the new index values​​. The cost of this project for the European citizens will be nil; the formulas that calculates market indices are already changed several times annually.